Why should Mach wave angle be less than wing sweep angle?

This is from my lecture notes: 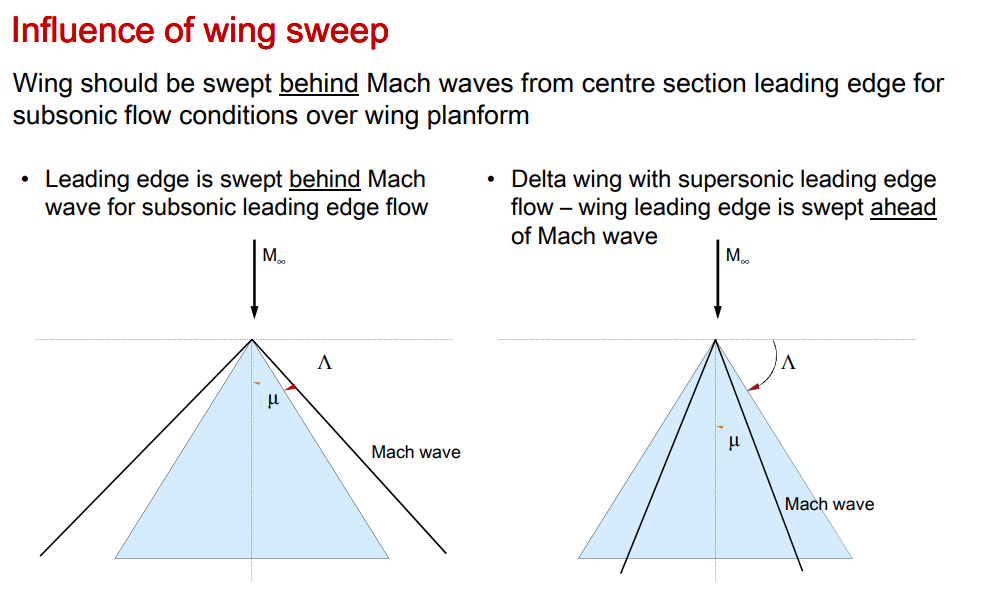 I see that this is so you can have subsonic flow over the wing planform, but why is this desirable? And are there more reasons?

I can think of heat being an issue if you have a strong shock wave forming on the wing. But I recall that pressure will also increase after a shock, so perhaps there is a reason why you might want the shock to occur inside the wing area? Just guessing at this point.

TLDR; Subsonic perpendicular flow over the wing's front edge lets you optimise the wing for the subsonic take-off and landing.

Don't be mistaken! The flow itself is still supersonic and you will still have to deal with shockwaves on your wing! You will not have (or at least it is very undesirable to have a strong shockwave in front of the aircraft) subsonic conditions over the wing. The perpendicular flow however is not and that what counts for the leading edge.

The leading edge of the wing should be as sharp as possible in a supersonic regime. Curves cause severe drag as multiple infinitesimal shockwaves form and combine into one large one. (In theory it would converge to adiabatic compression which is not at all true for the real case) However, a plane has to take-off in subsonic flight and if you don't have a TWR>1 you'll need your sweet sweet lift, and for this case, a sharp edge is incredibly unfortunate as it will create a very turbulent airflow or even worse separation due to flow from the bottom to the top over the front edge. Therefore, if the perpendicular flow is subsonic you can use a rounded front edge, helping you with take-off and landing.

If you want a very fast plane, (e. g. Ma > 3) you will have troubles as super swept wings won't help you with TO and LDG. Some fighters therefore have adjustable wings but that's a nightmare for safety reasons. In civilian aviation that's not gonna happen any time soon. -> You'll have to consider all your regimes during a mission. A plane that's super efficient in Ma>5 with it's SCRAMJET engines that's not able to TO on it's own is pretty much useless. Same with the wings.

Slightly longer answer: Subsonic flow has the capacity to negotiate the leading edge, resulting in a suction peak which is missing in supersonic flow. Sweep allows to keep that flow pattern for as long as the flow speed component perpendicular to the leading edge is subsonic.

This characteristic can be maximized by conical camber, a cambering of the most forward part of the airfoil which increases with span, such that the outer forward wing has a conical surface. This has been introduced with the F-106 and is used on many supersonic designs. 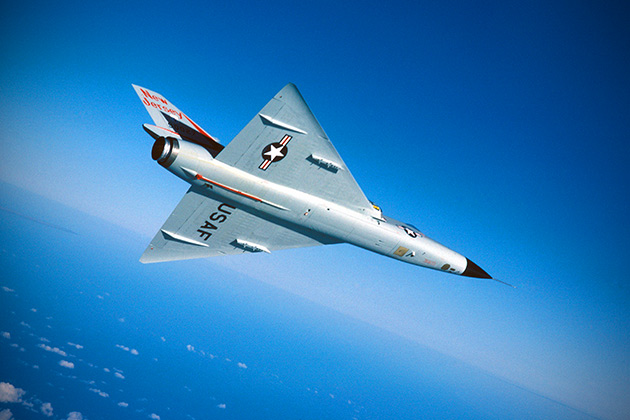 As explained in another answer, keeping the wing inside the shock cone maintains the subsonic pattern of sideways flow which causes air to flow up around the leading edge. This allows you to use a rounded leading edge, which also works well at low speeds.

But allowing the shock to meet the leading edge is not all bad. This is the condition in which the waverider operates, the Mach 3 capable North American XB-70 Valkyrie being perhaps the most notable example. The trick is to use the shock pressure on the underside to create lift, but to avoid it on the upper surface.

Not the answer you're looking for? Browse other questions tagged aircraft-design aerodynamics supersonic or ask your own question.

8
What is compressibility drag?
1
Does the quarter-chord-angle rule still hold for wings with very long chords or large differences between leading- and trailing-edge sweep angles?

8
Is flutter speed always smaller than divergence speed for aircraft?
10
Why do wall-to-wall airfoils in wind tunnels produce no (or infinitesimal) downwash?
1
Where is the wing sweep angle measured from?
11
Why do carburetors tend to produce richer mixture at higher altitude?
3
Why did this delta wing generate a lower Cl at a higher wind tunnel velocity?
2
How to define quarter-chord sweep angle for a cranked wing?
0
How to identify shock waves and expansion waves on a representation of the mach number?
2
Blunt noses subsonic drag - why a complete ellipse?
1
Why doesn't a wing in supersonic flow produce a shock that results in flow parallel to the leading edge?