How can I calculate the tail area required to achieve longitudinal static stability?

I've got a longitudinal stability question. I've not attempted this question yet as I didn't know where to start from, also my lecturer hasn't explained static stability to us clearly and I needed a step by step if that's fine. 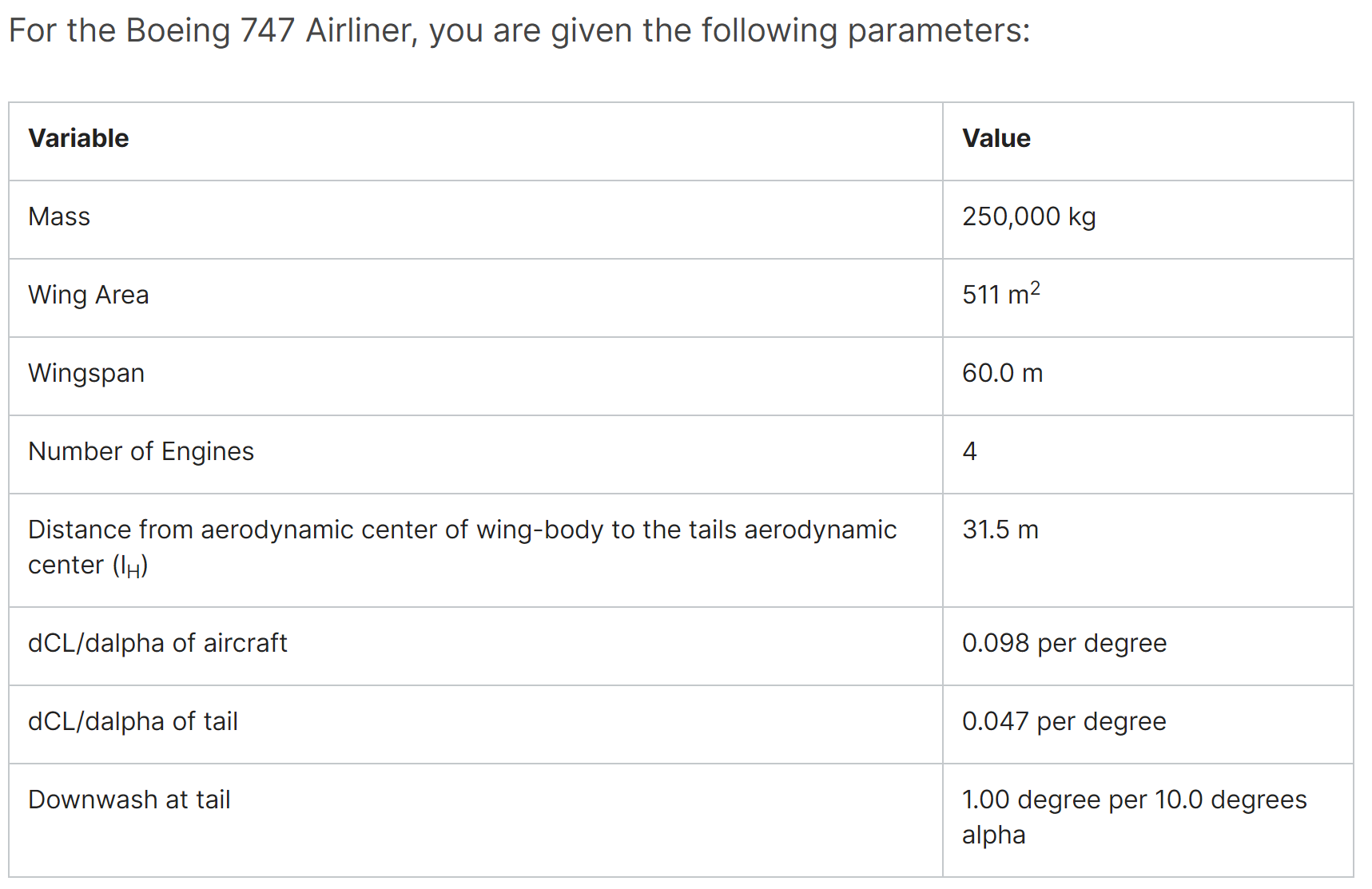 And this is the question:

The design requirement is that the aircraft should be stable when the c.g. is less than 1.8 meters behind the aerodynamic center of central wing.

What is the minimum required tail surface area to achieve this? Tip: first derivate the expression for longitudinal stability.

I'll leave it for @Peter Kampf to explain the math, but I find it's easier to conceptualize static stability if you simply think of the airplane as a weathervane turned so its pivot axis is horizontal. Static stability simply is the forces making it point into wind, except the wind is changing in a vertical direction rather than a horizontal one.

Instead of the weathervane's pintle, the pivot is the aircraft's center of gravity. The "vane" of the weathervane, the part the wind is blowing on to align it, is the aerodynamic center of the horizontal footprint of the entire aircraft, the sum of all of the dynamic forces acting in a vertical up or down direction on the fuselage, engine nacelles, wings and tail. This is the Neutral Point.

So the question is basically how big does the tail have to be so that the overall aerodynamic center, the Neutral Point, of the entire airplane is sufficiently aft of the Center of Gravity for an adequate pitch axis "weathervaning" tendency, or positive static stability. Making the tail bigger moves it aft, making it smaller moves it forward. The formula for longitudinal stability derives the surface area required of the tail when its influence is combined with the aerodynamic forces acting on the overall horizontal footprint of the entire body.

This is what got Boeing into trouble with the MAX. The engine change, moving the nacelles forward, basically shifted the aerodynamic center of the weathervane too close to the pivot axis (the most aft C of G), reducing its "pointing ability" in certain flight regimes. As if you'd added surface area to the front end of your weathervane.

Beyond that, you then get into trimming forces, or the use of opposing pitching moments between tail and main wing to create force balances that allow the aircraft to point "off wind" (vertically), which gives you the ability to maneuver and be stable at various angles (angles of attack on other words, which you need to do to make the wings lift in the first place) other than directly into wind, as well as have good dynamic restoration characteristics. Without trimming forces, the airplane becomes a very statically stable lawn dart.

Your previous questions have already established that your professor oversimplifies things and has an issue with teaching basic concepts.

Static stability means that a change in angle of attack (AoA) changes the aerodynamic moments around the center of gravity (c.g.) such that a restoring moment change remains. Mathematically speaking this means: If the derivative of the moments over the angle of attack is negative, the airplane is stable. Here we look for the minimum tail area that creates stability, so the desired derivative should be zero, becoming more negative with larger tail areas.

Now let's get to work: What are the contributions to the aerodynamic moment change over AoA?

Since neither speed nor altitude are known, I cannot use a number for the dynamic pressure and keep its symbol ($q$). All other parameters are given.

The 29.7 meters is what remains between the c.g. and the a.c. of the tail. But we forgot one thing: There is downwash to consider! When the real AoA change is 10°, it is only 9° at the tail. Mathematically, this means $\delta\alpha_H = 0.9\cdot\delta\alpha$

Now it is time to set the sum of both moment derivatives equal to zero:

which is 14% of the wing area and far less than the real number of 136.6 m². Umer, you should now at least check the units in all those equations to see whether they make sense. Report in the comments what you have found out!

The real number is higher since the rear c.g. location does not produce an indifferent longitudinal stability but leaves a nonzero minimum. Unfortunately, this minimum is not given. Another reason is that the tail is normally sized for the landing case with full flaps. A third reason is that you want to keep some margin for maneuvering - again, such a margin is not given here.

Not the answer you're looking for? Browse other questions tagged aircraft-design aerodynamics stability or ask your own question.