I am working on an electric ducted fan rocket that has thrust vector control,in image 1. 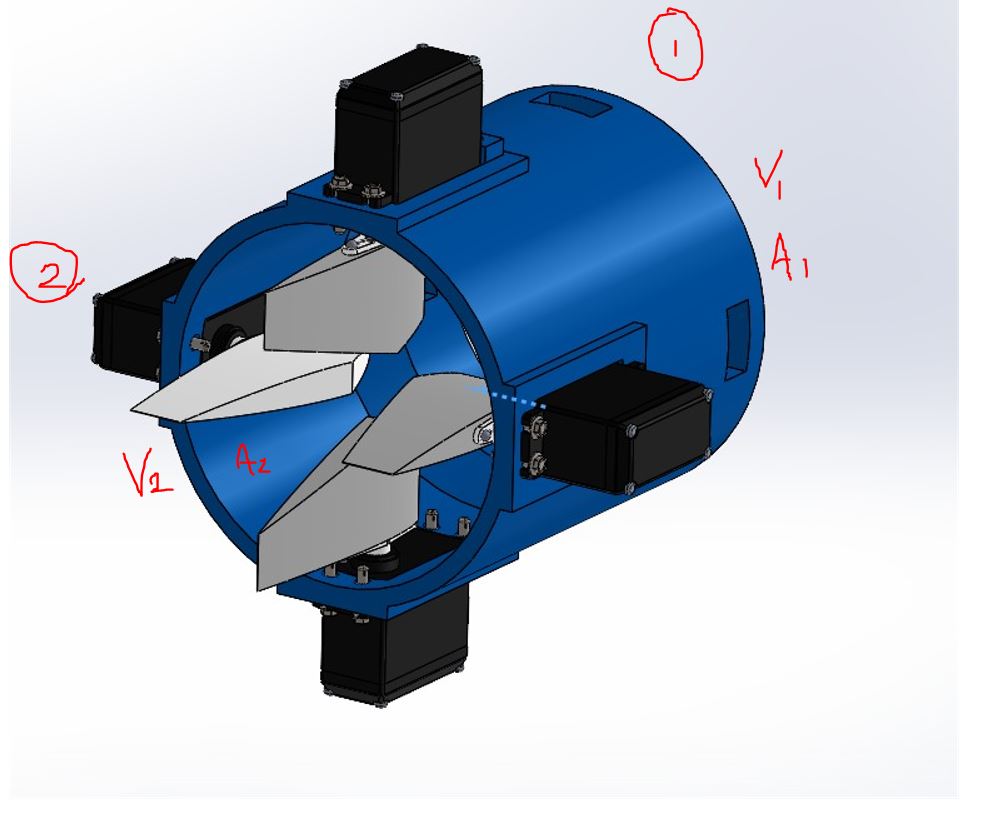 For a given static thrust (3.62kg in my case),I am interested in the maths behind finding the velocity exiting the annular area, V1, the velocity at the exit of the ''thrust tube'', V2 and why the EDF thrust varies depending on the thrust tubes exit area. I had seen a formula that can find this V1 velocity

. M_dot can be expanded to densityAreaV1, where Area= annular area of EDF or FSA.

On the velocity note, another confusion arose in me. If there was no thrust tube, I could find V1 using the first equation for the given static thrust. The area would be the annular/FSA area of the EDF. With the thrust tube, I would think the same formula and values would apply, getting V1. But if the thrust tube exit area affects the overall thrust, there must be some relation to and the the 1st formula.

Edit: In short, my goal was to find the velocity at the EDF exit. I was to use this value as an initial condition for a CFD analysis( to determine the values for redirected thrust), seen attached. 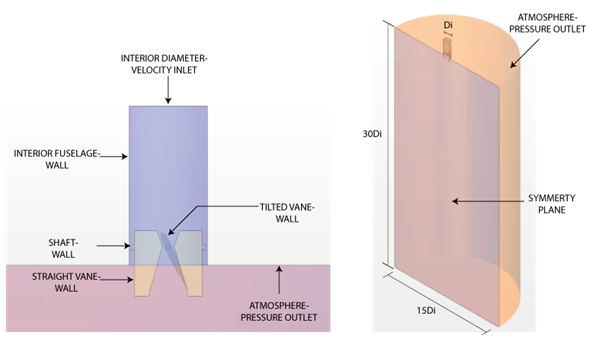 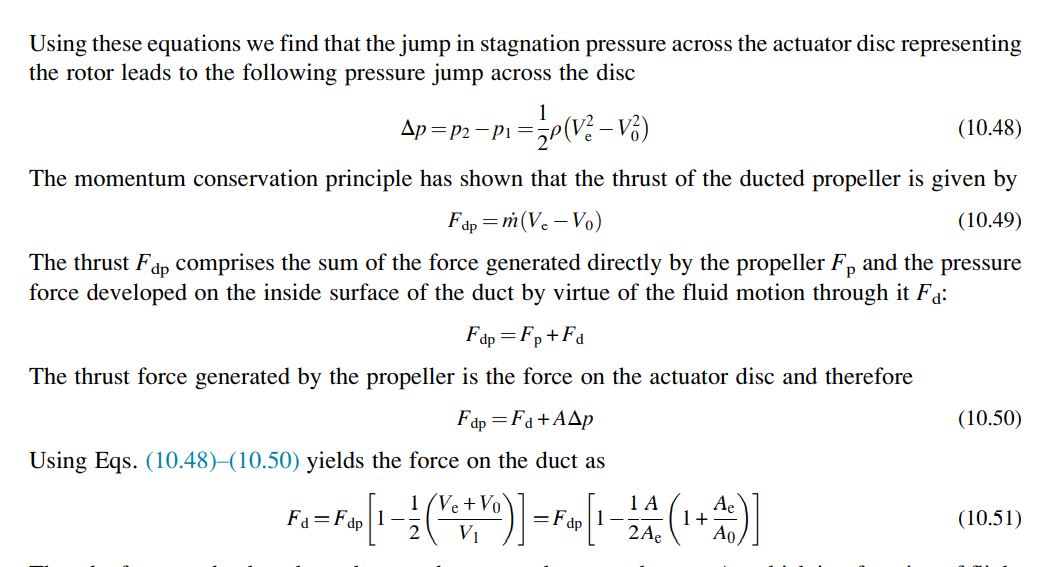 involved knowing the overall thrust, made of the propeller thrust and force developed by the duct interior. The problem is that the EDF thrust (3.62kg) is specified for solely the EDF; my scenario has an additional extension, so the actual overall thrust is unknown ,leading to being unable to find the EDF exit velocity

I would appreciate any advice

I think you have a couple of questions, which I will try to answer in order.

As wikipedia puts it:

Normal unducted propeller produce trailing vortices, however in a duct these vortices cannot form (simply because the duct wall hinders them from doing so). This means increased efficiency, as a trailing vortex requires energy to form. It is important to note however, that these efficiency gains cannot surpass the idealized propeller assumptions/calculations. And if you get your duct design wrong, it can even hinder efficiency as it interfers with incoming or outgoing airflow.

The formula for an idealized propeller (one which sets air in motion without any losses uniformly across its crosssection), the formula is:

In order to find your velocities at point 1 and 2, you would simply plug in these numbers.

Adressing your last paragraph: These formulas are for an idealized propeller. For an ideal propeller you would encounter all sorts of losses and real-world effects like vortices or inequal velocity distribution etc. etc.. Therefore engineers normally start with these kind of "rough" formulas in order to get a sense or idea of the quantities involved. In your case this is exactly what you would want to do. The next step would be either rather extensive CFD analysis, or real-world test (Due to time, effort and cost involved, Hobbyiest normally choose the latter).

Note that as I pointed out before, the EDF is merely a way to increase the efficiency of the propeller, therefore to reduce the real-world effects in order to approach the theoretical efficiency of the propeller. Do not make the mistake to think that the duct is a magic device which will push the efficiency through the roof, because it will not! In fact if you make errors in designing your duct (for example by making it a simple straight tube), you will encounter yet other real-world effects which will hinder the airflow (e.g. airflow seperation at the inlet or outlet, which will produce inefficiencies, therefore eating up power).

Not the answer you're looking for? Browse other questions tagged thrust thrust-vectoring e-fan propfan or ask your own question.

16
What are the advantages and disadvantages of ducted fans in designs such as the Airbus E-Fan?
12
How (and why) does engine thrust change with airspeed?
3
How to realistically model propeller static thrust?
26
Do multi-engine jets need all engines with equal age to reduce asymmetry in thrust and fuel consumption arising out of deterioration?
2
How can I calculate the relationship between propeller pitch and thrust?
2
How does altitude affect the TAS and thrust of an electric fan powered aircraft?
1
How can a small ducted fan produce a large amount of thrust?