Why don't militaries use ram-air parachutes?

Military parachutes for use by humans (both paratroopers and distressed aircrew) tend to be of simple round or (more recently) cruciform design:

(Image by the United States Army, via Wikimedia Commons.)

(Image by the United States Army, via Flickr, via Wikimedia Commons.)

These are simple drag parachutes, generating no lift. In contrast, sport parachutists nowadays almost invariably use much-more-advanced rectangular or elliptical ram-air parachutes, which generate much lift and relatively little drag: 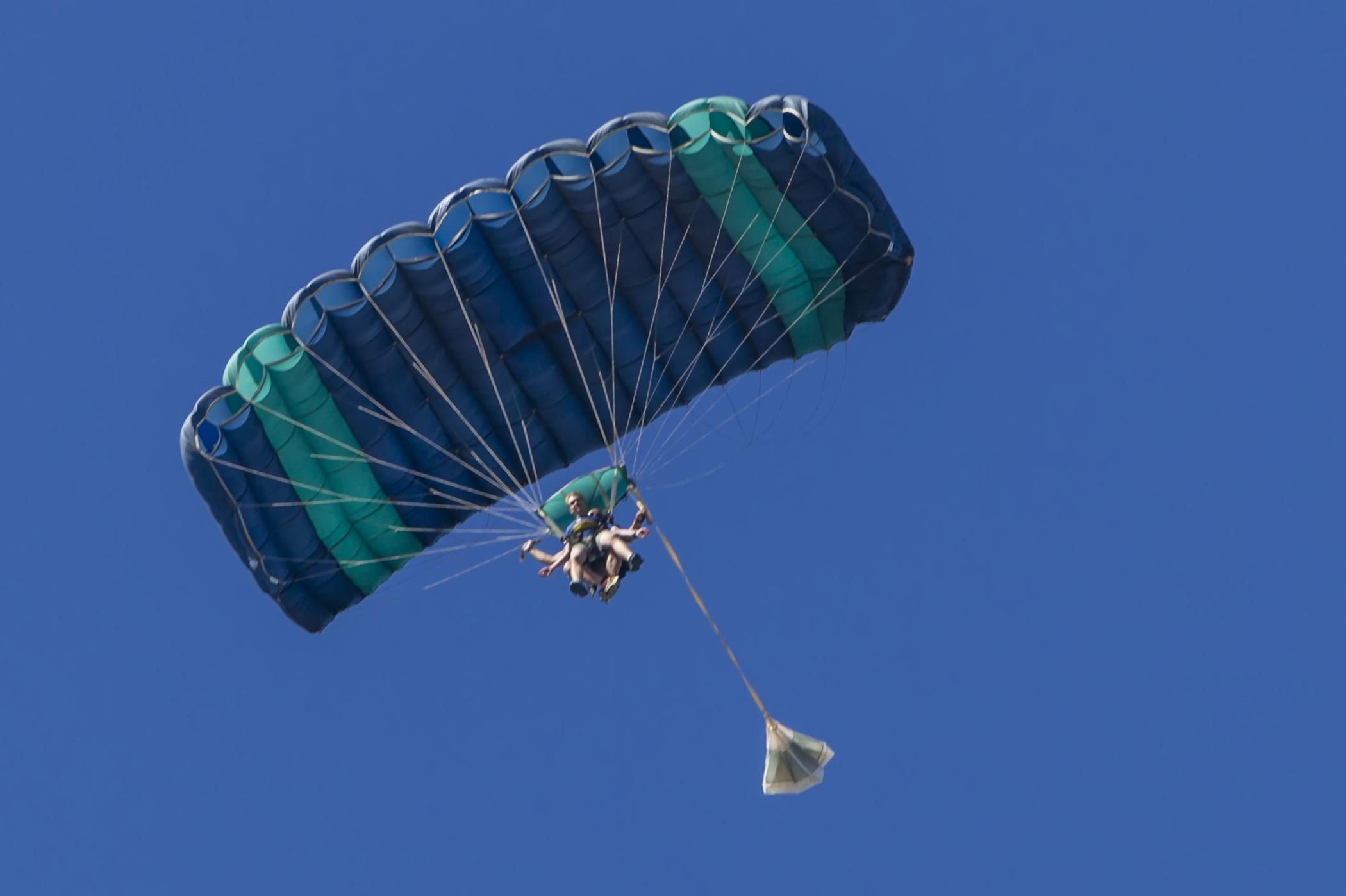 (Image by John [shebalso] at Flickr, via Wikimedia Commons.)

Military use of ram-air parachutes is essentially limited to display teams.

This seems rather odd, given that lifting ram-air parachutes:

So why do military users stick with drag parachutes rather than moving to lifting ram-air parachutes?

You’ve made some faulty assumptions there as the military does use square chutes for specialist parachuting, but rounds are popular for several reason:

As Arkem stated, they use both, but the primary reason for the use of a simplified parachute is just that it's simplified. In general Airborne troopers are supposed to fall where they are told to, as intended by the pilot, as instructed by the wing commander, as ordered by the REMFs.
When you give that same trooper the ability to adjust their flight path then you add in all manner of variables that are not only unnecessary, but dangerously unpredictable.

There are serious military advantages to using a round "non steerable" parachute for mass tactical assaults. (And there are sometimes military reasons to use ram air or steerable rounds, generally for special operations forces operating in small teams...)

First, keep in mind the purpose of "regular" airborne operations. We aren't talking about inserting a highly trained and experienced 12 man Green Beret A Team behind enemy lines and land them all in a volleyball court sized clearing.

We are talking about dumping at least 500 fully equipped infantrymen on a drop zone that is probably at least two miles long and a half mile wide... we want them on the ground safely, with 100+ pounds of combat equipment, as quickly as possible, and we don't really care where on that DZ they land. For larger operations, well have to use larger DZs or multiple DZs, and may well be dumping 20,000+ troops. We also want the troops to be able to walk out of a relatively short course with a very low number of practice jumps, and be ready to make a combat jump for real the week they report to their unit. (There were two brand new E-1 privates who literally hadn't even reported to their units after Basic, AIT, and jumpnschool, whose first jump after jump school was a combat jump into Grenada with another unit - these privates were engineers and qualified to drive bulldozers, were so new they could be soared from their unit without costing serious combat capability, and thus available to jump in with the Rangers to drive away the heavy construction equipment the Cubans left parked all over runways the Rangers needed to sieze and put into service. They jumped at 500 feet into combat as their "cherry blast", before they even met their own platoon leader.)

This thinking also applies to military emergency parachutes, like bail out and ejection seat rigs. And those military pilots, by and large, are not parachutes, so it needs to work well the first time theybuse it, even if they are unconcsious or injured when the canopy deploys, it's too dark to see anything, and they don't know what's on the ground other than "bad guys".

69
Why are commercial flights not equipped with parachutes for the passengers?
42
Do unused parachutes need to be repacked? If so how often and why?
15
Why is there a difference between military parachutes and those used for skydiving?
6
Why don't most military transports use modern commercial engines?
1
Why/how is a downplane parachute configuration aerodynamically stable?
9
Why don't [most] sailplanes use whole-airplane / ballistic parachutes?