What could cause both engines on a 737-200 to fail at nearly the same time?

On July 2nd a 737-200 departing from Honolulu experienced engine trouble shortly after take-off. The flight ended with the flight crew having to ditch the aircraft and being rescued by the Coast Guard.

Starting at 4:15 in this video the pilot states that the remaining engine is running hot. This is conjecture on my part, but I wonder whether the cause of the engine running hot has something to do with what made the first engine fail.

So my question is: Are there special aspects about the older 737-200 (that may have been fixed in later models of the 737) that could result in both engines failing at around the same time? I have no knowledge about the 737 in general, but an example could be a joint oil reservoir, a pilot action related to the fuel management, or something similar.

Also, related more-so to flight operations: Why would the flight crew choose to fly out over open water instead of returning and landing, or, at least staying closer to the airport?

Generally, without knowing the details of this accident, dual engine failures are typically caused by one of the following:

Regarding the last point (overstressing the remaining engine):

Now looking at the specifics of this accident.

The weather at the airport at the time of the incident was not particularly hot (26 Celsius) or humid (±61 % relative humidity). And being at sea level, the airport is not high either. Note that in case of an inversion layer, the temperature may have been higher at altitude.

The planned flight was approximately 100 NM, so the aircraft was unlikely to be heavy.

Although we can safely reject many of the causes listed above, there is no obvious or very likely cause for this dual engine failure. As always, we have to let the investigation team do their work and wait for the final report.

In general there's a few reasons for a multiple engine failure:

I will not speculate as to the cause of the mishap to which you are referring (Transair 810), however, I believe I can provide some clarity regarding the route over water. The Honolulu airport is located relatively close to Waikiki, a neighborhood with a lot of hotels and apartments. Many airports have noise abatement procedures in place to minimize the impact to residential areas nearby. As it turns out, there is a voluntary noise abatement area off the end of the Reef Runway (26L). This may explain the turn offshore after takeoff. It’s also worth pointing out that ditching (or, god forbid, crashing) offshore is a FAR superior option when compared to the same over a (very densely) populated area. The planned route was to fly the PALAY3 departure, then to the LNY VOR, before flying the CAMPS3 arrival. Obviously, the flight never got beyond the PALAY3. The PALAY3 takes the aircraft initially offshore and away from noise-sensitive areas. 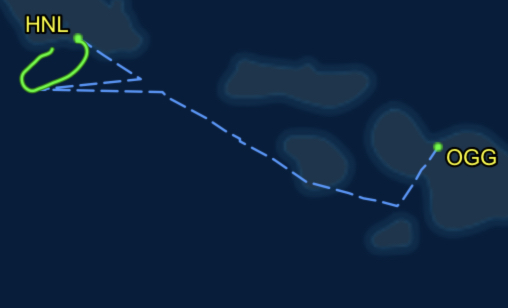 A look at the flight path on FlightAware shows the intended route. While it might’ve made more sense to fly a different route, SIDs aren’t customized. They have to serve a variety of routes. The routes work well for ATC flow control and keep aircraft away from risky or noise-sensitive areas and they then disgorge aircraft toward their destinations. Heading offshore isn’t generally dangerous, as twin engine jets are very safe. Hopefully this sheds some light on why the route was picked.

The oil systems on the two engines are separate, for the obvious reason. If there is (uncontaminated) fuel in the tanks, pilots can't starve the engines without deliberately closing the engine start lever (i.e. shutting the motor down themselves) or getting into unusually nose-high attitudes. The latter don't matter when boost pumps are operating- which is basically always, in flight; nose-high attitude can interfere with gravity-feeding fuel from the main tanks. (But that wouldn't, per se, lead to a "running hot" condition -- rather the opposite.)

Ingesting hail or birds can affect both engines, and can cause damage or failure; damage in the right spot could lead to excessive EGT on the way to engine failure.

Not the answer you're looking for? Browse other questions tagged boeing-737 engine-failure ditching or ask your own question.

8
Why are 737-200 engines more susceptible to separation?
9
Could the Concorde reliably land with all engines out?
4
What happens to cabin pressurisation when the engines fail?
6
Why has Boeing used mini winglets on the 737-200?
3
What is the absolute ceiling of a 737-200?
5
What would cause an abrupt increase in engine noise after takeoff on the Boeing 737-800?
9
What could cause the Boeing "Pickle Fork" issues?
8
What is the procedure for an engine fire in the 737-800?