What is the function of the aft stator in CFM's open rotor engine design?

CFM revealed their design for a open rotor propfan engine with two stages of blades - one active set of blades rotating in the forward and an static sets of blades on the aft. 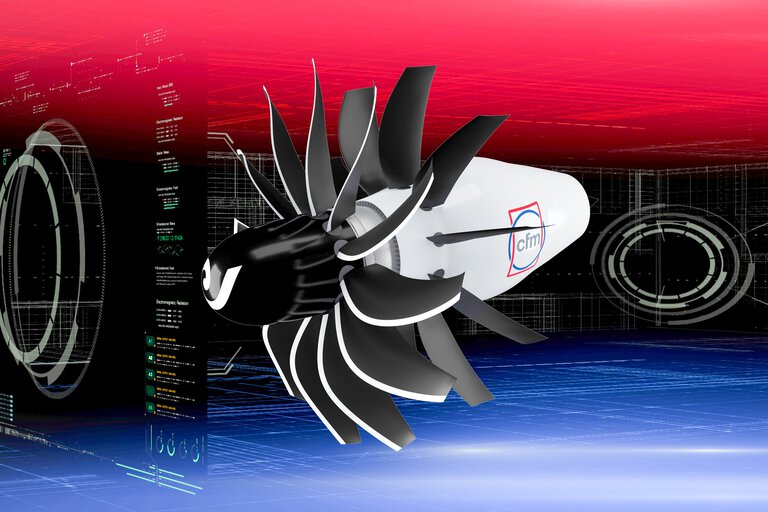 According to The Seattle Times the design of this engine is:

…with scimitar-shaped rotating blades, and behind that a circle of fixed blades, or stators, that straighten the air flow.

Short answer: that fuel saving figure does not depend on the stator stage.[1] The aft stator function is swirl recovery, assuming its weight penalty can be offset.

GE's (part of CFM) patent for that engine was filed in 2020: Unducted thrust producing system architecture US20200308979A1. From the patent, the second set of blades are optional, and also optionally they could rotate around their long axis to adjust their pitch angle. Assuming the weight penalty can actually be offset.[1] 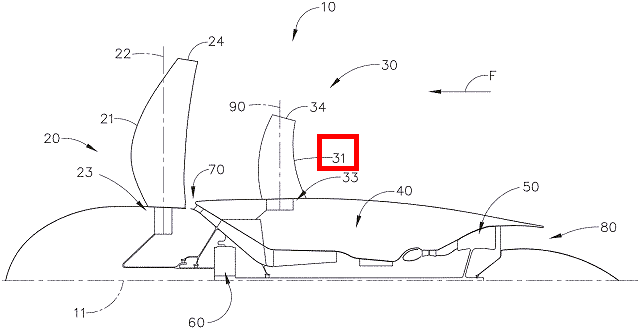 Blades 31 are sized, shaped, and configured to impart a counteracting swirl to the fluid so that in a downstream direction aft of both rows of blades the fluid has a greatly reduced degree of swirl, which translates to an increased level of induced efficiency.

That concept of swirl recovery quoted above isn't new. And the figure of 20% reduction in fuel consumption that you read is before any swirl recovery, according to an 80s NASA report:[1]

At intermediate stage lengths, fuel savings of 15 to 20 percent are expected for single rotation propfans with no swirl recovery, with the benefits depending to some extent on the choice of cruise speed. Benefits are projected to be even greater if swirl can be eliminated without excessive weight penalties, whether by swirl recovery techniques applied to single-rotation systems or by the use of counter-rotation propulsion systems.

Propfans/open fans/UDFs/UBEs (or as Flight quipped in 1985, "a load of bananas whirling round") keep cropping up in marketing every decade. Here's an excerpt from Flight International's coverage of the 1985 Paris Air Show:

Propfan started life as a single-rotation tractor configuration. There are indications that a wing behind the propulsor will recover some of the swirl energy, but not as much as contra-rotation. [emphasis mine]

GE's design from that air show had the contra-rotating design mentioned above:

Regarding the noise you ask about, at least to passengers, air hitting an object that is unducted as in this case, would add to the noise. GE said in 2007 that the noise would be "acceptable and certifiable", which isn't the same as as quiet as turbofans. Regarding the use of stators in turbofans behind the fan, they're indeed used, see: In a turbofan, why are there no stators behind the fan?

Only if fuel prices soared, and stayed high, would propfans be appealing, otherwise airlines will stick to ducted fans (Whatever happened to propfans?, 2007, Flight):

The signs were there the year before [i.e. one year before 1989], when Welsch [GE's general manager of commercial operations] admitted that at 65¢ per gallon, the fuel price was too low to justify the UDF. "If fuel were at a buck or so a gallon, they'd be clamouring," he said.

Accounting for inflation, the gallon price nowadays as of writing this is cheaper than or very close to that 65¢ quoted above from 1988.

Another thing is the scalability. A contra-rotating propfan like that on the McDonnell Douglas MD-94X demonstrator produced ~100 kN of thrust, which is what you'd expect on a twin-jet narrow-body. If the thrust is halved (ballpark) by omitting the second rotating set, more engines would be needed, which is a no-no (the fewer the engines the better).

A 60 kN propfan may find a market in business jets, but that's a market segment that really doesn't care about fuel or the most economical cruise speed. Going into the 200–300 kN range, and the number and size of blades needed will increase, and will be best packaged inside a duct as they are now.

Not the answer you're looking for? Browse other questions tagged engine-design efficiency blade fuel-consumption propfan or ask your own question.

8
In a turbofan, why are there no stators behind the fan?
5
Do any propellers/propfans use stator vanes? Why is this not a commonplace feature?

25
What does the actual path of air within a turbojet engine look like?
37
Why increase the number of cylinders in an engine instead of increasing their volume?
1
What are the conditions for the percentage power vs fuel consumption figures in the engine operator manual?
5
What is the fan tip speed at maximum thrust?
3
Is the rotor described in this Kickstarter new?
6
What passenger airplane has the lowest fuel efficiency?
3
What is the correct equation for rotor solidity?
2
What is the most recent turbofan engine that used steel for its bypass fan blades?
8
What are the design principles that result in thin, long-span, narrow chord main rotor blades?