What prevents a small plane like a Cessna or Piper from flying as high as a jet?

Obviously taking oxygen in consideration. What prevents a small plane from being able to fly at a much higher altitude? I know some business jets can fly up to 40,000 ft. Does it have to do with the wings air foil? For example, can you fly a Cessna 172 at 20,000 ft or higher?

We will take the case of an unsupercharged piston engine, as used in most small Cessnas and Pipers.

All engines need the oxygen in air to burn their fuel. As an airplane climbs, the air thins out and so there's less oxygen available, so the engine can burn less fuel and so it produces less power. There then comes an altitude at which there's not enough power available to pull the plane through the air any faster so as to make more lift in that thinned-out air and keep climbing. Roughly speaking, that is the plane's ceiling.

Now if we put a more powerful engine in the same plane, not only can it climb faster, but there's more power on tap at higher altitude even though its power output is still falling as it climbs. So it can keep pulling the plane through the air progressively faster as it climbs and thereby keep the wing producing enough lift to add altitude. In this way, a more powerful engine will lift the plane higher before running out of power and so exhibit a higher maximum ceiling.

Jet engines are enormously powerful and because of their compressor design, they can make the ambient air denser at high altitudes and so they can maintain their fuel burn rate and keep producing high power up to very high altitudes- far above the altitudes at which a piston-powered plane without a supercharger runs out of climb capacity.

You can add an air compressor (called a turbocharger or supercharger) to a piston engine's intake to trick it into thinking it is breathing sea level air when it is actually at 10,000 feet, and then it can keep climbing, as pointed out by Mike Sowsun- as long as the pilot has an oxygen tank on hand so he or she can stay alive up there.

This is a simplified picture, but not to worry- in a couple of hours, Peter Kaempf will be out of bed and will furnish a more complete reply!

What limits a small plane to be able to fly at a much higher altitude? 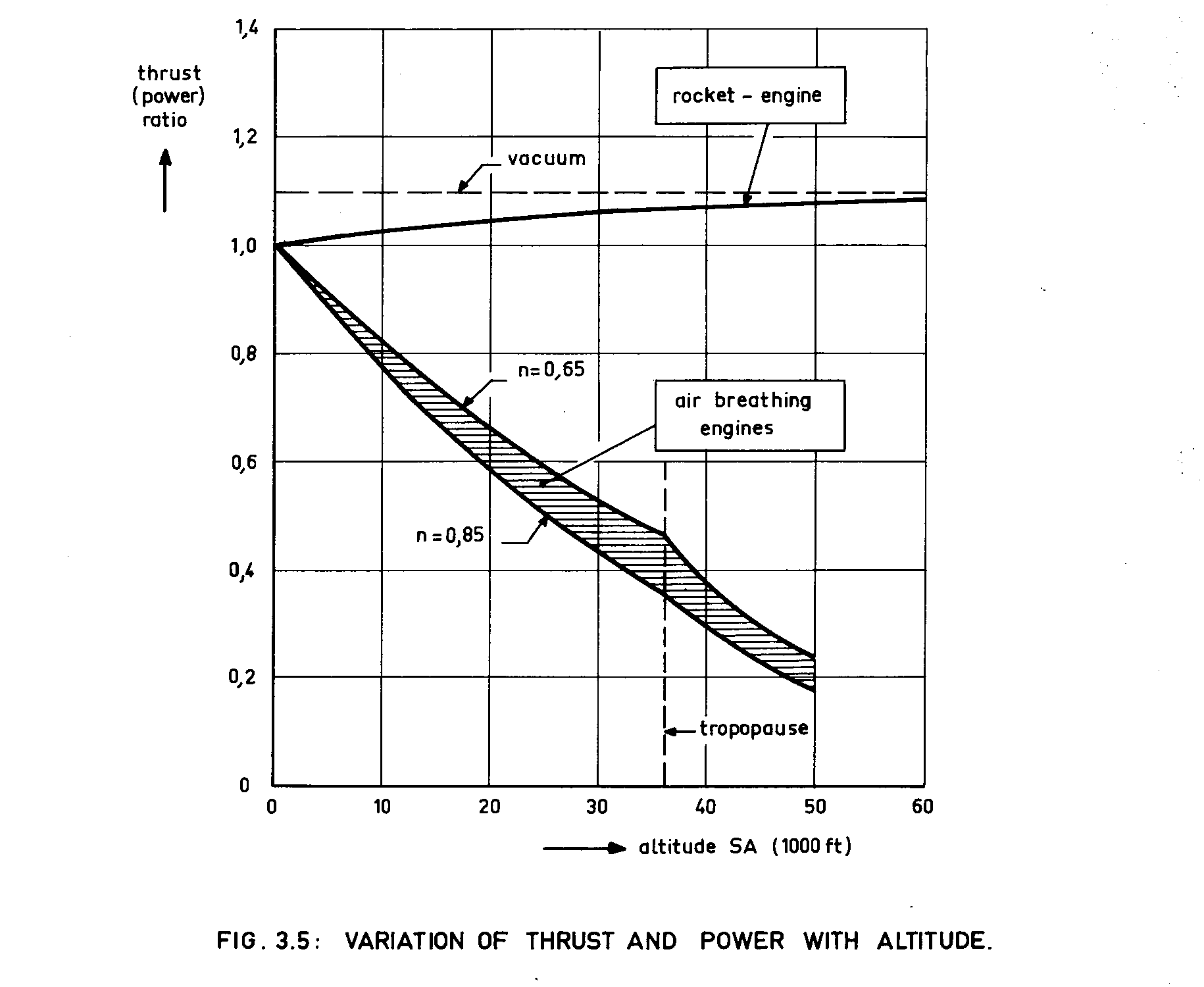 Power and lift on an aeroplane both decrease with increasing altitude, as shown in the image above, from my paper copy only old uni book of prof. Wittenberg. At 20,000 ft about 60% of take-off power is still available, at 40,000 ft about 35%. 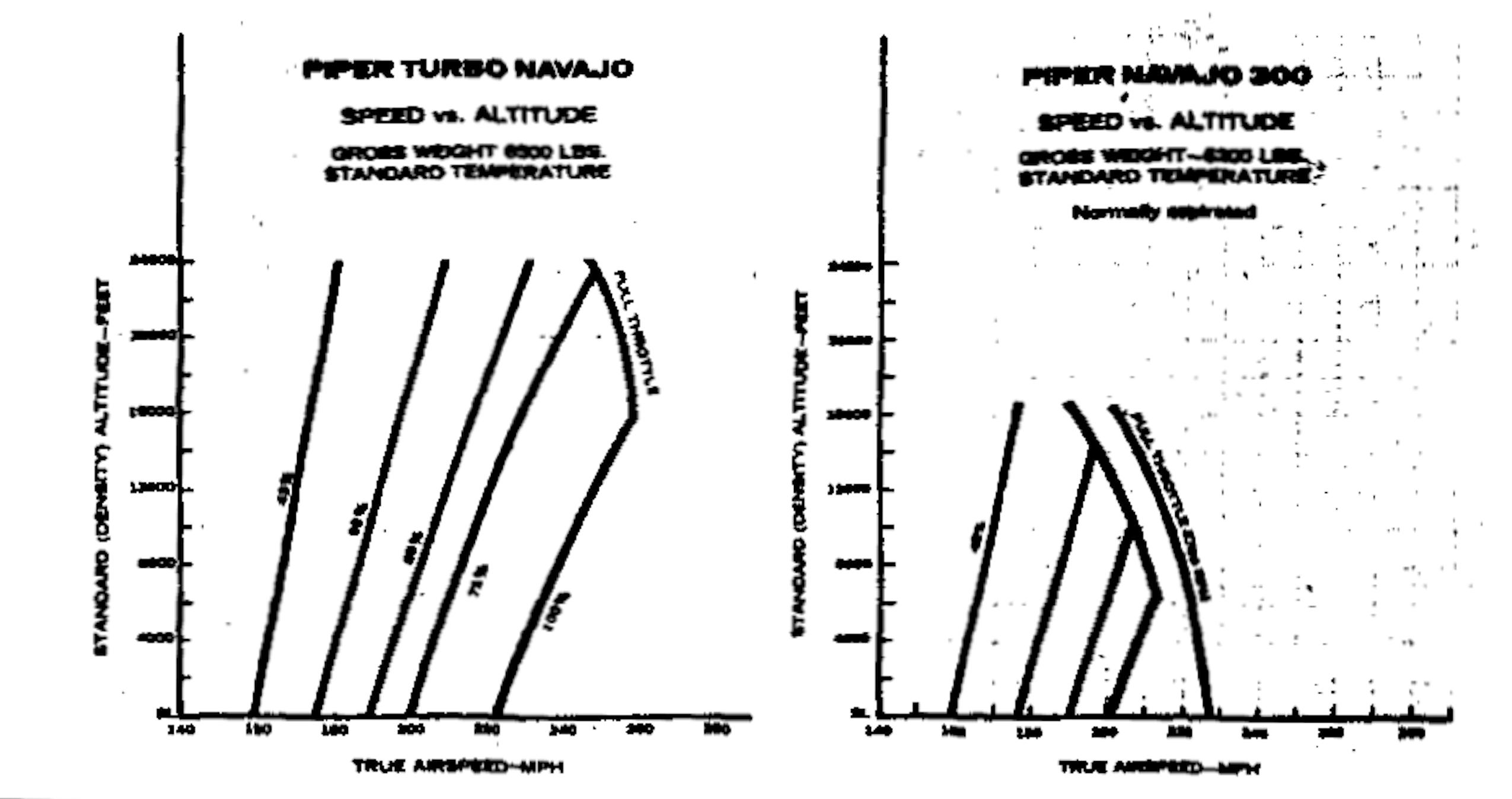 From Torenbeek, Synthesis of Subsonic Airplane Design, fig. 4-10: maximum altitude of a Piper Navajo, piston engine with and without turbo. The vertical scale is a bit hard to read, it increases with 4,000 ft to a maximum of 24,000 feet. Which the more expensive turbo driven engine reaches, due to compressing the thin intake air at altitude.

Install enough power to begin with, and a propeller plane with piston engine can reach 40,000 ft as well, as shown by the data for the P-51 Mustang.

The service ceiling of 41,900 ft was courtesy of the Packard Merlin engine. Which is not being produced anymore, due to turbine type engines such as in the PC-12 being much lighter and less expensive for the same power rating.The PC-12 reaches 30,000 ft, is still too expensive for the average Joe Private Pilot though.

Conclusion: throw money at it, and it will fly higher...

The previous answers give an excellent overview of limiting factors regarding high altitude flight with powered civil aviation aircraft like a small Cessna.

Of interest might be that people have operationally used these aircraft at altitudes in excess of the aircraft's original-design flight envelope. One use in particular which comes to mind has been in special applications such as high-altitude aerial-photo surveys. A modified Cessna Turbo Stationair has been used in such high-altitude aerial surveys and was flown at altitudes above 37,000 ft (11.3 km). The plane's engine, modified to have a two-stage turbocharger, could maintain sufficient manifold pressure to fly at such altitudes.

The interior of the plane was essentially stripped of unused, excess-weight items (five of six seats) and other miscellaneous and unnecessary equipment. The camera bay, aerial camera and camera operating equipment, necessary flight instrumentation and radios, and sufficient oxygen (tanks), were items carried on such flights, along with required fuel. The owner of this plane commented that at such altitudes, the plane did not fly especially well, but it was manageable. He also commented on the interesting view looking down on commercial jet aircraft flying at altitude below.

Also of interest might be that other much lighter, essentially smaller, commercially built, single-place, unpowered aircraft have been routinely flown at altitudes well above 40,000 ft (12.2 km). These are sailplanes, and oxygen is required on such flights. Although generally less than 600 lb (270 kg) in weight (one-fourth the weight of a small Cessna), they have larger span wings (55 ft or about 17 m, more or less) with generally similar wing area compared to a small Cessna powered aircraft. Paul Bickle, retired director of the NASA Dryden Flight Research Facility, flew a Schweizer 1-23E sailplane to an altitude of 46,267 ft (14.102 km) on February 25, 1961. His flight was within a Sierra wave and was just over 2 hours from take-off to landing. Bickle's record for altitude gained, 42,303 ft (12.894 km), is unchallenged in a single-place glider. He suffered outside air temperatures of -65 deg C which frosted the inside of his canopy so badly he could not see the expansive view before him. He only had his instruments to guide his flight, and, because he could not close his cockpit outside-air vents, became so chilled and distracted by the cold that he had difficulty paying attention to piloting his sailplane. Of course, he was more attentive as his canopy cleared in warmer air at lower altitude. Also, Robert Harris flew a single-place Grob 102 sailplane to a record altitude of 49,009 ft (14.94 km) on February 17, 1986. His flight was also in a Sierra wave.

In 1952, Larry Edgar and Harold Klieforth set an altitude record in a two-place Pratt-Read G-1 glider, soaring to 44,255 ft (13.489 km) in a Sierra wave. However, on April 25, 1955, Larry Edgar's Pratt-Read glider was destroyed in the lee of the Sierra by a rotor-cloud at 17,000 ft (5.2 km) as he was investigating the rotor's turbulent structure at the base of a wave. The acceleration he experienced, in excess of -20g, ripped off his helmet, boots, gloves, and oxygen mask. As he drifted downward he could see parts of his glider being carried upward and worried if he pulled his parachute rip-cord, he might be carried upward as well. Fortunately, he was able to make a parachute landing and survived without breaking any bones. The extreme negative acceleration partially damaged his vision. Edgar was the only one in his sailplane when this happened.

As one can see, all caution must be used when flying an aircraft in conditions that are not within the original aerodynamic-design flight envelope of the aircraft. The plane will fly, but nevertheless, aerodynamic control is critical. This brings to mind the following caution that is especially true in high-altitude flight, and known all too well...

Aviation, although not inherently dangerous, is, to an even greater extent than the sea, terribly unforgiving of any carelessness, incapacity, or neglect.

Not the answer you're looking for? Browse other questions tagged cessna-172 aircraft-limitations high-altitude or ask your own question.

9
What keeps an aircraft engine from flaming out at high altitude?
7
What is the safe separation for landing a Cessna-172 behind a commercial airline jet?
7
Passenger hypoxia in a small plane at 11,000 feet: what is the pilot's responsibility?
15
What are the limiting factors for high altitude planes (e.g: U2 or SR71) preventing them from going higher?
14
What causes a Cessna 172 and its gear to shake violently after landing and braking?