How much does the fuselage of an airplane contribute to yaw stabilization?

This is not a dumb question at all, and the short answer is not at all.

Since the fuselage must be balanced around the center of gravity (cg), part of it will be forward of the cg. This part contributes a destabilizing effect and since the fuselage is a slender object, most of its lift will be produced near the nose. This means that the whole fuselage, even if it is very long, is still destabilizing as a whole.

The vertical stabilizer is closer to a wing and also more effective. The aspect ratio also influences the amount of lift that can be achieved with a given angle of attack (lift curve slope) and for slender bodies the lift curve slope per radian is as low as π/2 times the aspect ratio while for a wing of infinite aspect ratio it is 2π. This is all valid for attached flow, so with larger amounts of sideslip and flow separation on the leeward side things will change and the exposed area will become more important.

The heavy engines and very lightweight structures of early airplanes would allow a very short forward fuselage while the rear fuselage would have a large side area. Still, even those needed a small vertical tail, mostly for control, but also for stabilization. Note that all airships were laterally unstable and required constant attention by the person at the rudder controls to stay on course. 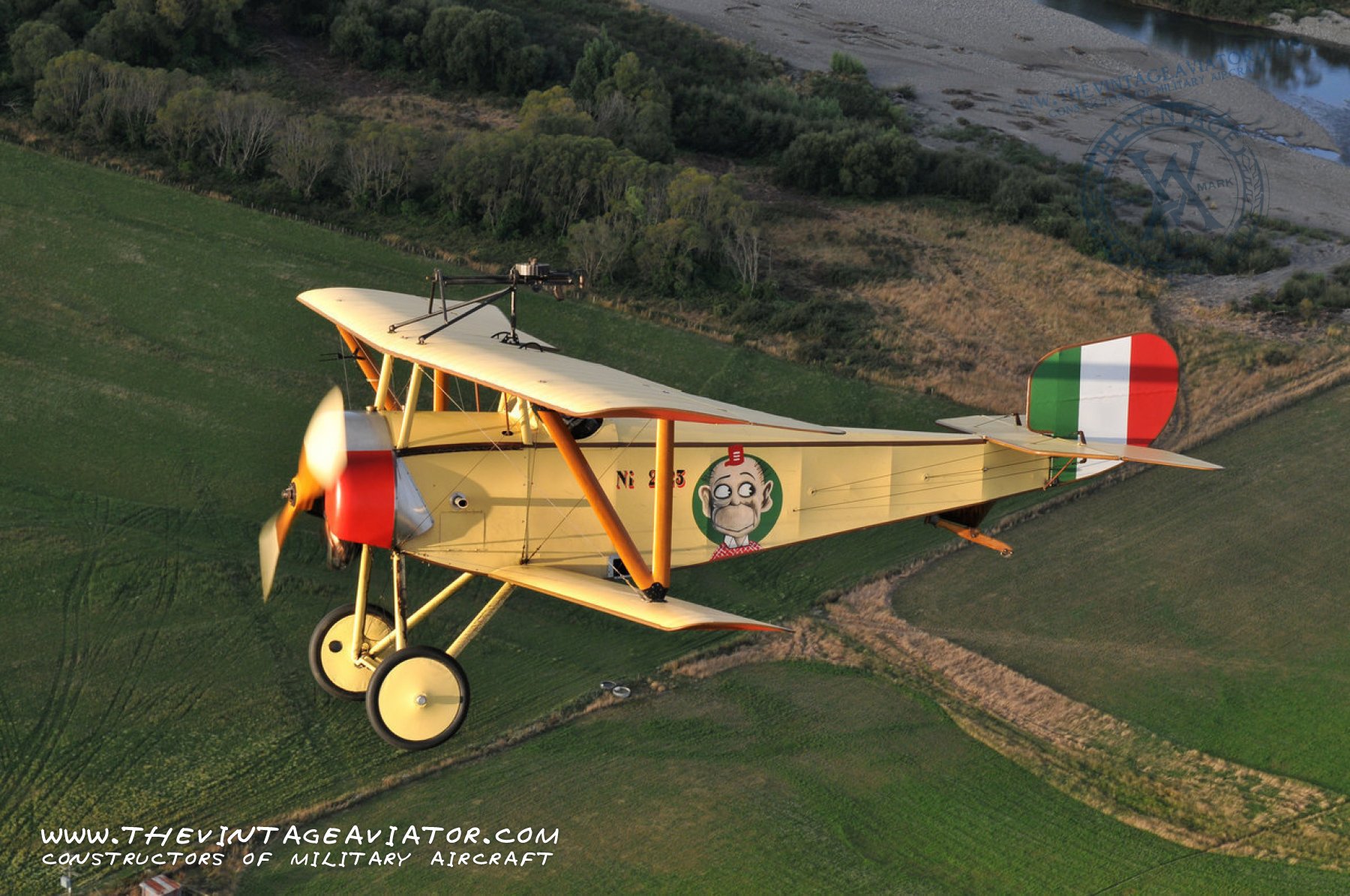 The Nieuport 11 (picture source) should illustrate the point about early airplanes nicely. If you take away the rudder, the fuselage will start to yaw off course until flow separation starts and limits the amount of yaw. However, at this point drag will already be punishingly high, so the rudder helps to keep the fuselage on course.

What percentage the fuselage contributes, depends of course on the shape of the aeroplane. The figure below is from my university book (paper version only) on flight dynamics, by prof. Gerlach, which shows the dimensionless yaw coefficient $C_n$ as a function of side slip angle $\beta$, for a wind tunnel model of the Fokker F27: 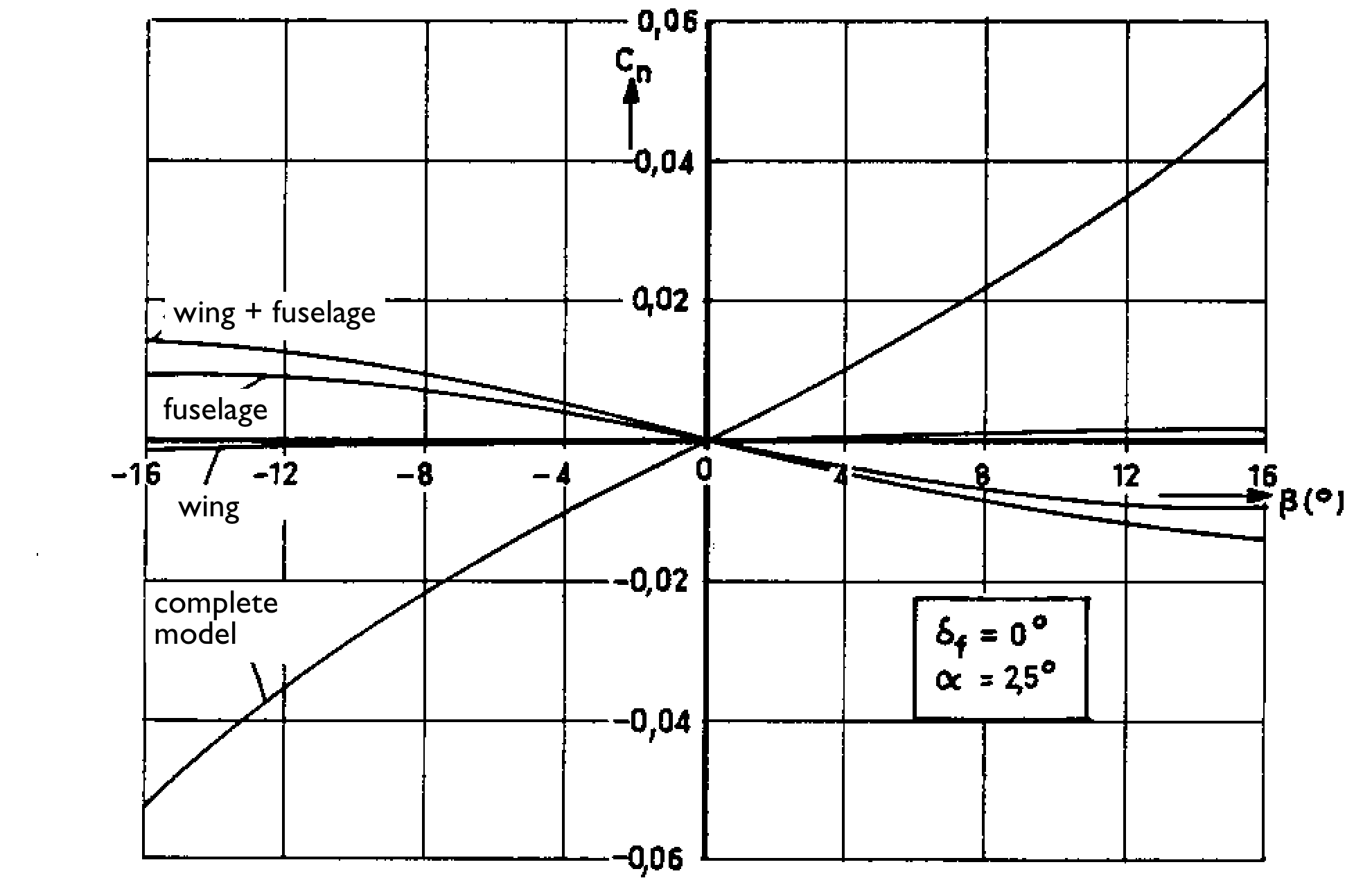 The four graphs indicate, from left top to bottom, the $C_n/\beta$ of:

For the two graphs with the fuselage, $C_n$ is negative for positive $\beta$, indicating a de-stabilising yaw coefficient as a function of slip angle. For the F27 the contribution of the fuselage/wing is about -30%, the vertical tail is an absolute necessity!

Not the answer you're looking for? Browse other questions tagged aircraft-physics yaw or ask your own question.

20
Why do blimps have fins?
13
What is the method to calculate a finite wing's lift from its sectional airfoil shape?
4
Why is the aerodynamic center for most airfoils located at the quarter chord location?

10
How does a tiltrotor yaw while in vertical flight?
5
How is a sideslip maintained (aerodynamically)?
16
Why not use the yoke to control yaw, as well as pitch and roll?
14
What are the exact meanings of roll, pitch and yaw?
1
How much force is produced by control surfaces?
2
Is there a standard word or phrase in the English-speaking world to describe the angle between the fuselage and the flight path / relative wind?
0
When do the lift and drag vectors contribute a force component along a glider's path of travel as seen from the ground?
0
Are there any helicopters with tail rotors where slip-skid ball may be centered even when fuselage is streamlined to the airflow in cruising flight?
1
How does vertical stabilisation work?