Who controls VFR flights in class B airspace in Europe?

I was reading about this incident where a near miss occurred in class B airspace between IFR and VFR flights that were in contact with different controllers. 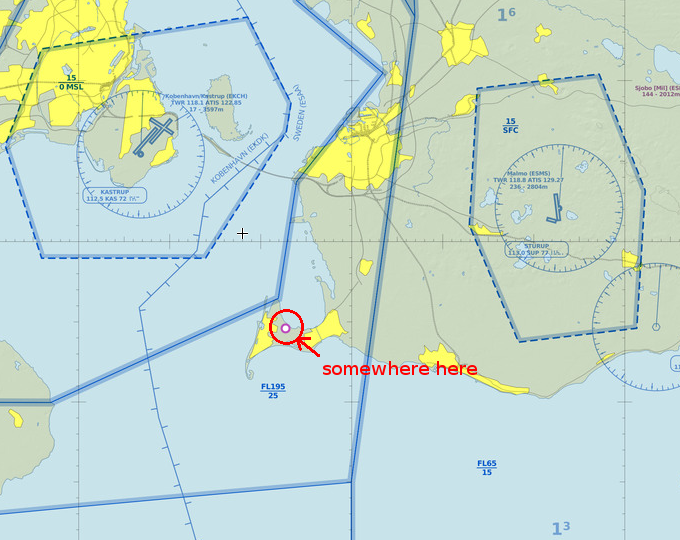 at 4000 ft amsl. This chart does not list frequency for that airspace, but it is clearly airspace of the (Danish) Kobenhavn/Kastrup (EKCH) airport. But it is in Swedish airspace and Sweden area (ESAA). The VFR flight was flying from east to west, so must have crossed from other class B sector that apparently belongs to Malmo (ESMS) about 5 nm earlier. So does it make any sense it was (still) talking to Swedish controller (the article is not absolutely clear, but seems to say it was Sweden area, not Malmo approach) while the other flight was talking to Kobenhavn approach?

Obviously I am not trying to find what happened; the investigation will hopefully eventually explain that. I'd just like to understand what the normal procedure in such situation is.

The airspace in which the mentioned incident took place is not classified B. In fact, no class B airspace exists in Denmark or Sweden at all.

The incident did take place in København TMA (which is airspace class C).

So I would like to know which controller normally gives the clearance to enter class B airspace to a VFR flight?

I don't know how this works in the USA, but in most of the world, it is very easy to figure out which ATC unit is responsible for a specific airspace. All aerodrome specific airspaces, such as control zones, are listed in the appropriate AD 2 section of the AIP. For all other airspaces, including TMA's, you should look at the ENR 2.1 section of the AIP.

If you look up the airspace in question in AIP Denmark, you will see that the responsible ATC unit is Copenhagen APP, specifically the approach east sector (118.450 MHz). So, the specific unit who will give clearances to enter this specific airspace is Copenhagen Approach. There is no general answer to your question, since different procedures are used in different places.

When entering from class E, does the area controller provide the clearance or the approach controller of the airport whose class B it is?

There is no class E airspace to be found around the position of the incident. Plenty of G, though.

And when the aircraft then crosses from one class B airspace to another?

The answer to which is quite simple: the aircraft will be transferred to the next ATC unit, who will then provide appropriate service within its airspace.

So does it make any sense it was (still) talking to Swedish controller (the article is not absolutely clear, but seems to say it was Sweden area, not Malmo approach) while the other flight was talking to Kobenhavn approach?

København TMA - airspace class C - extends from various lower levels to FL195. At the position of the incident, as you have indicated on the chart, the TMA extends from 2500 FT upwards. While Copenhagen Approach provides service within København TMA, service in the airspace below the TMA (which is classified G) is not provided by Copenhagen Approach. Unlike other Danish airports, where the local approach unit will provide service "in, above, below and around" the TMA, Copenhagen Approach is simply too busy dealing with IFR traffic to and from EKCH. Service to traffic below the TMA (which is mainly VFR traffic) is thus provided partly by Malmö ACC (Sweden Control), partly by Copenhagen FIS (Copenhagen Information).

As it so happens, service within Malmö TMA (which is class C, rather than class B as you suggest) is also provided by Sweden Control. There is no approach unit at ESMS - approach control service is provided by Malmö ACC. Therefore, it makes perfect sense that the pilot, coming from the east, was talking to Sweden Control. And since the controllers on the Sweden Control sector had no reason to assume otherwise, they had to believe that the VFR flight in question was in fact below København TMA, in class G airspace, where Copenhagen Approach does not provide service. This is of course not true - the VFR flight was actually in København TMA, for reasons which are beyond the scope of this to discuss - and as such, should have been talking to Copenhagen Approach (and should have been operating a mode C transponder).

At the same time, the IFR arrival (737) was approaching EKCH, within København TMA (class C), and so, was correctly talking to Copenhagen Approach.

What happened then can be read from the incident report. My purpose with this was simply to clear up the misunderstanding concering the airspace in question (which is also what the original question was about).

I'm assuming you're referring to this where a Cessna 172 had a near miss with a 737: http://www.havarikommissionen.dk/~/media/Files/Havarikommissionen/Havarirapporter/Luftfart%202014/Preliminary%20ATI%20Bulletin%20HCLJ510_2014_273.ashx

It really depends how they've set it up. The terminal area chart (TAC chart) for the bravo airspace contains VFR flyways and procedures including who to contact for clearance. So if you're interested you can get the TAC chart for Kobenhavn and look (usually) on the back of the physical chart where it has more info.

However, having said that: I think this VFR pilot accidentally flew into bravo airspace and will probably lose his/her license. Here's why:

Aircraft B was reported to fly at 4000 feet with no radar presented altitude readout.

I'm not sure how "Sweden control" hands off to Denmark, but if he's flying to bravo in Denmark you'd expect him to be talking to someone in Denmark, either the bravo airport's tower or Copenhagen Approach which is who the Boeing 737 involved in the incident was talking to.

If he was in Bravo legally he should have been assigned an altitude, heading and squawk code and ATC should have maintained separation between those two aircraft and the bravo controllers are the best in the world at doing exactly that. So I think he accidentally flew into bravo and was talking to the wrong controller.

Not the answer you're looking for? Browse other questions tagged air-traffic-control airspace easa-regulations or ask your own question.

14
“<Callsign>, remain VFR” — may I enter Class C airspace?
6
Who has authority over stadium TFR exceptions in VFR flight?
17
Does Flight Following automatically include permission to fly through class C or D airspace?
12
Can an IFR clearance be issued and flown through IMC in class G airspace?
11
Why does a pilot want to hold a Squawk Code when leaving Class B airspace?
7
Is prior clearance into Class B airspace revokable?
3
How can I plan a VFR flight through controlled airspace, without knowing what instructions ATC will give me?
2
Is mode C required for CVFR in Canadian Class B airspace?
0
What requirements aren't met, that would designate an airspace to be Class E instead of A, B, C, or D?
2
What altitude restrictions are there in Class C airspace?