What should the Attitude Indicator be reading when in straight and level flight?

I recently replaced the vacuum instruments in my plane, a Piper PA-28-180, to a GI-275 Primary Flight Display (PFD). This plane is being used for training at my local flight club.

It is my understanding that most airplanes require a positive angle of attack to generate lift. It seems to me that 5 degrees nose up would be about right for a 180 horsepower airplane with 2 people cruising at a density altitude of 10,000 feet.

Is my lead flight instructor correct that the attitude indicator should read level with the horizon in level flight?

Essentially this question boils down to, what is the definition & reference for "0" pitch?

"Level flight" would be a problematic answer, because as Ron Beyer notes, your deck angle for level flight varies with airspeed (among other things).

With the old attitude indicators, one could set the airplane symbol to whatever you wanted, so setting it so that at "these" conditions "today", level flight matches up with 0 pitch displayed is viable. Maybe not wise, but that's its own discussion. (For instance, if you lose your airspeed indicator & have to use known pitch & power settings, you've just introduced a delta to every pitch setting that's published, by tweaking the attitude indicator like that.)

With modern AHRS and INS/IRS/INU's, the answer to the question becomes simple... 0 pitch is whatever the airplane/software manufactures say it is, and that's that... no adjustments available. That zero reference typically corresponds to a 0 AOA in level flight or level attitude on the ground or something like that. Thus, "level flight" generally corresponds to some amount of nose-up attitude. The 737 is about 3-4 degrees nose up, although the difference between clean & 200 knots vs clean & 320 knots is significant; then you start adding flaps or changing the gross weight & everything changes some more.

I don't know if 5 degrees is right or not -- it certainly seems in the ballpark. The lead CFI may be right that it's off, but if he's claiming that it's off by the full 5 degrees I'd be doubtful. If the pitch shows zero when taxiing on a level surface, I'd tend to think that the system is okay. If it's showing +2 or +3 degrees at that point, it might be worth consulting whoever installed the new system & asking if that's right or if a sensor needs some adjustment.

The direction your thoughts have taken is absolutely correct. While we can all understand the simple expedient of aligning the airplane symbol with the horizon, the practice is incorrect when referring to actual pitch attitude.

It's possible, but unlikely that an uncomplicated design like a PA-28 have a 0 deg pitch attitude in 'normal' straight and level flight at normal cruising speeds. 5 deg seems to be more likely correct, though it seems also too suggest a slower speed. Maybe the CFI is referring to the worst case to emphasize his objection.

I remember transitioning from a 2 seat trainer to a high performance 19 seat turboprop and being embarrassed because I would dutifully put the nose of the airplane on the horizon of the ADI to level off and almost instantly develop a 2500fpm descent as a precursor to the ensuing camel ride. The Instructor, had superannuated not a month earlier from flying the wide body Airbus 300 and hadn't dealt with 250 hour trainee pilots before. Ironically, the A300 can be flown beautifully using simple pitch and thrust values.

The only saving grace for me was that the series of trainees that followed were a shade worse if anything. For me what followed was a day of sussing things out, and the fastest growing up I've ever done in a 24 hr period.

To be fair to all of us trainees, a simple brief on 'Pitch Attitude flying' would have avoided the whole debacle and waste of the first days aircraft training (no 'luxury' of a simulator)

From the question asked, it's clear that the issue has not died away, for pilots who are essentially transitioning from mostly VFR to IFR style flights.

For pilot's of larger airplanes knowing the Pitch + thrust/torque/power for different phases of flight and especially for straight and level, is probably the most basic, useful and unfailing tool given to them. It is the mainstay in tackling "flight with unreliable airspeed". It is second nature for a heavy jet pilot to aim for somewhere around 7 deg pitch for level flight the moment the first stage of flaps/slats are extended.

From the discussion and answers given so far, the record is far from clear and the following concepts need clarity:

PITCH ATTITUDE: There should be no ambiguity in the understanding of pitch attitude - it is the angle made between the Longitudinal Axis and the local horizon of the Earth, the longitudinal axis being a straight line that runs in a fore-aft direction and is the axis around which the airplane ROLLS.

LEVEL FLIGHT: refers to flight with no change in altitude, i.e. Vertical Speed (VS) = zero. Level flight can be performed at different speeds and during turns.

Attitude and Heading Reference Units (AHRU) boxes are installed to provide inputs for the PFD. Level attitude i.e. Pitch = 0 and Bank = 0 for the PA 28 is defined in the diagram below: 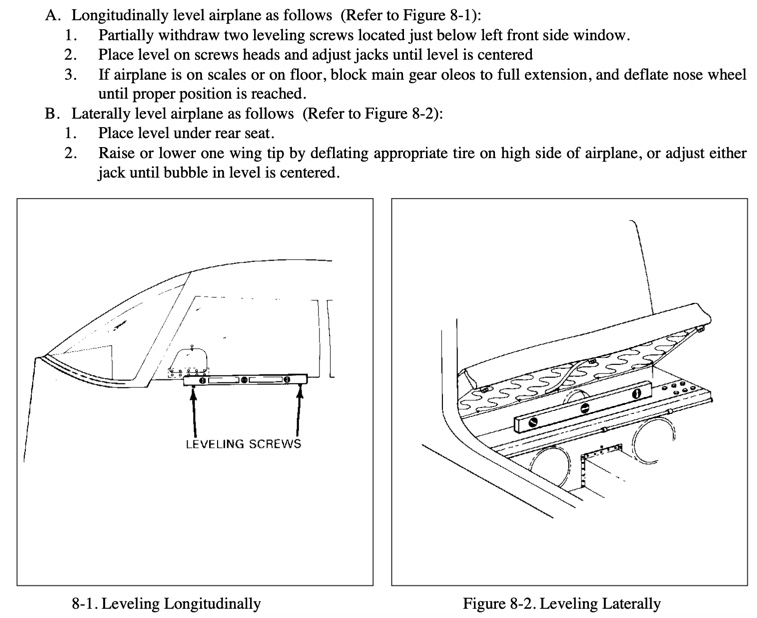 Once the AHRU is installed and connected and feeding the PFD, then pitch and roll calibration offsets are set as required so as to display Pitch = 0deg and roll = 0deg with the airplane level. These software controlled offsets are available via menu on the GI-125 interface.

Given the above description and 'definitions', an important property of such systems is that they naturally align themselves to the Earth's local horizon, or put another way, they exhibit the behavior of a 'bob' that hangs vertically along the line of gravitational force and the local horizon is at 90deg to this, and this is what the PFD displays. This holds true whether the system contains mechanical gyros mounted in a gimbal, or the ring laser type and is basically governed by thee properties of the inertial gyro and the rotation of then Earth around it's geographical, or True axis.

The upshot of all this is that the pitch attitude and AoA are governed by the laws of Physics and cannot be simply set to match what is convenient to us as doing so would render them erroneous under different circumstances.

As for whether 5 deg is correct - you could check about the calibration offsets as described above - this should not be difficult to ascertain from the shop that did the installation.

5
Does Smeaton's coefficient have a modern accepted value or it is dependent of the air density?
1
What dictates the shape of the attitude indicator display on the PFD?
2
Is it possible to fly a Straight and Level flight at high speed?
5
How to convert IAS/CAS to TAS up to Mach 3?
0
What does CSTR means on an Airbus FCU and what happens when CSTR PB is pressed?
0
What is the relationship between drag and sink rate?
4
Is Turn and slip indicator a good back-up for the attitude indicator?
5
What exactly happens when power is reduced in trimmed, straight and level flight?
0
RC airplane required engine power