Why does Class D overlap class B around SeaTac? ...and other Seattle Bravo airspace strangeness

I noticed KBFI's class delta overlaps SeaTac's bravo by 500 to 700 feet. Does anyone know which tower the overlapping airspace belongs to? Does it classify as Bravo airspace and do you need to hear the magic "cleared into the bravo" phrase before entering the overlapping areas?

This is a great question. For those who are unfamiliar, and in areas where airspace is complex, it’s sometimes useful to look at the VFR Flyway Chart. This is the one on the back of FAA Terminal Area Charts. 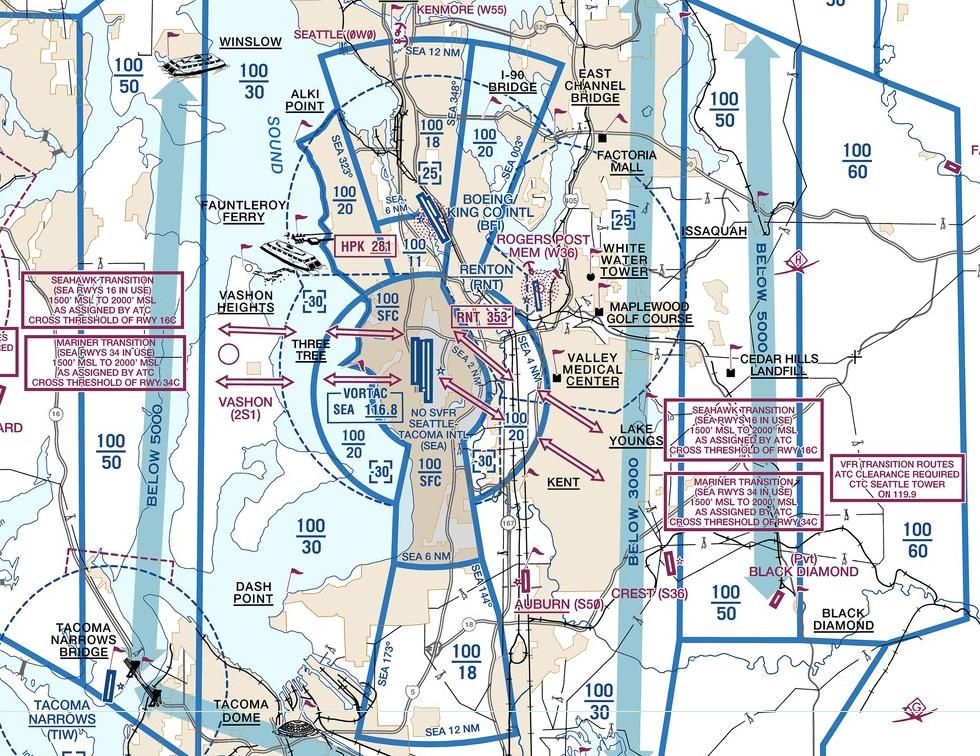 Why does KBFI stick into the KSEA Class B?

Class D airports, or at least those that don’t exist entirely within more restrictive airspace, will always have a ceiling. This is because there will be sections that are not contained within the Class B (or C) areas. For those areas, we need to know how high the Class D airspace goes.

If there is Class B and Class D airspace in the same place, which is it?

Why does KSEA have weird class D chunks?

This one is easier - because Class B doesn’t always go to the surface (only at the core), but there is still a need to filter out traffic from the immediate airport environs. Because two-way communication is required, pilots will need to talk to the tower before getting too close (~5SM) to the airport.

Another factor is that Class D centers on the airport; Class B is centered on the SEA VOR, and they are not coincident. This is so that the rings could (when it was circular) be defined with DME.

The SeaTac Class D space is below the SeaTac Bravo.

Its purpose is basically that if you are getting close to the Bravo, SeaTac wants to be in communication with you, and know that you're aware of your proximity to the Bravo. But they probably won't issue you a Transponder Code or give you vectors (unless traffic is near by).

Its just gives them confidence that you're aware of where you are and what you're doing before you end up in front a 767 on short-final. :)

In the FAA's "Airspace Designations and Reporting Points" document, this airspace is specifically described as "Class D airspace... extending upward from the surface and designated as an extension to a Class B surface area." (page D-164). It is the only example of this kind of airspace in the entire US national airspace system.

There is also one single example of "Class D airspace... extending upward from the surface and designated as an extension to a Class C surface area." It is at Biggs Army Air Field at El Paso, TX (KBIF) (page D-165).

Not the answer you're looking for? Browse other questions tagged air-traffic-control airspace aeronautical-charts class-b-airspace class-d-airspace or ask your own question.

37
How do I "sightsee" in a class Bravo airspace?
5
Who controls VFR flights in class B airspace in Europe?
12
Which parts of class E airspace can an ultralight (part 103) fly in without prior ATC authorization?
12
Is it possible for a non-towered airport to have keyhole extensions Class E starting at the surface?
3
Sightseeing in a class Bravo airspace?
5
Does the flight always switch to TRACON on a go-around in class B airspace?
3
Does this chart show a heliport in class D airspace without a control tower?
10
What do these double Class Bravo airspace floor and ceiling limits mean?
4
What airspace class is the New York Hudson/East River SFRA airspace, and what is its visibility requirements?