Which hand do fighter pilots use for the control stick?

Or is it the other way around? Or do they maybe use both hands a lot of the time? It also brings up the question as to what the other hand is expected to do and which side of the cockpit the most common control buttons are on.

My guess is that since most people are right handed, they use their right hand. There's also triggers on the yoke so it seems all the more likely that the right hand is used for right-handers.

I'm asking because you look at video games and their controllers. They always use the left joystick for moving the character. In the case of flight simulators, the left joystick is used as the 'stick' or yoke. So you're pretty much left with no choice but to use your left thumb. Not saying this is awkward for video games, however, on those big joysticks for PC games, I remember I always used my right hand.

Also, let's ignore civil commercial piloting because those seem to usually use steering wheel type controls, not a traditional stick. Please let me know if you're a fighter pilot when you answer, because the triggers on the yoke have an effect on which hand you're most comfortable with.

Most fighter pilots, regardless of their handedness, use their right hand to fly the stick, and their left hand to move the throttle(s)/PCL (Power Control Lever). This is just how most fighter cockpits are set up, with the power on the left side. 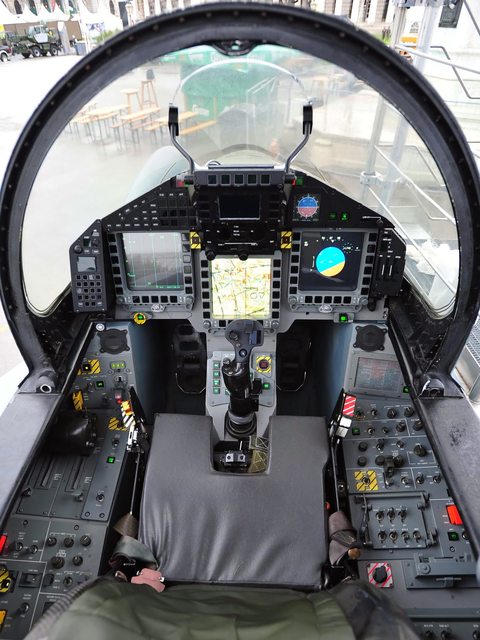 The sticks are also not really usable for a left hander because a few of the buttons would be inaccessible with a left hand on the stick. In some cases (like the F-16), the cockpit uses a sidestick layout, with the stick on the edge of the cockpit, rather than in between the pilot's legs. 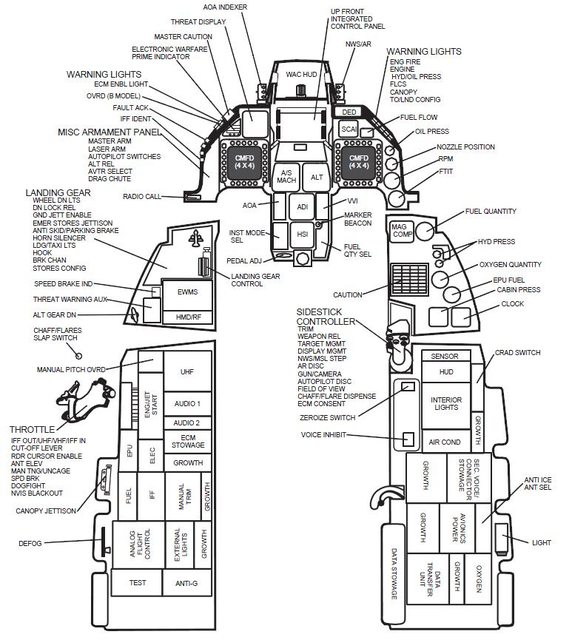 So no, it would not really be possible for left-handed pilots to fly with their left hand on the stick for long periods of time (I will note, that if you need to select something on the right side, most will hold the stick lightly in their left hand for a brief second, actuate the item with their right hand, and then switch back) unless the entire cockpit were redesigned, which is just not worth it.

I am an ex-military pilot and retired airline pilot who is still an active pilot in general aviation. The simple answer is that single seat and tandem seat cockpits are set up with the throttle and trim on the left, so that the stick has to be handled with the right hand.

I never have trouble switching back and forth, but some people do.

Its not just fighter planes that have the stick in the right and power in the left. That's the way tandem (front-and-back seating) aircraft are set up in general. You can see the throttle on the left-hand wall in this Citabria: 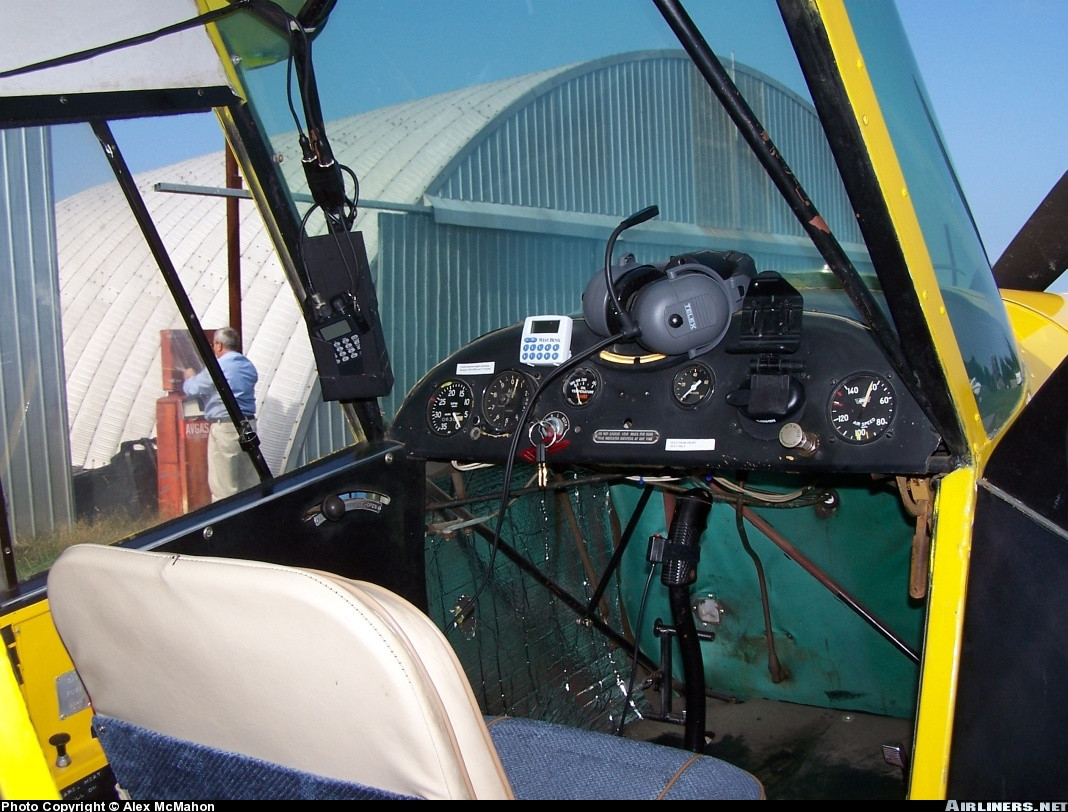 And gliders and helicopters are also set up with "the stick" in the right hand and "power" in the left.

Even though a glider doesn't have an engine, most of them have some kind of airbrakes, which are deployed just as if it was a throttle. Pushing the lever forward with the left hand decreases drag and pulling backwards increases drag. This isn't the same as thrust, but to a power pilot, it feels fairly natural to push forward to go faster and pull backwards to go slower. The speed brake handle in this glider is the blue handle on the left. 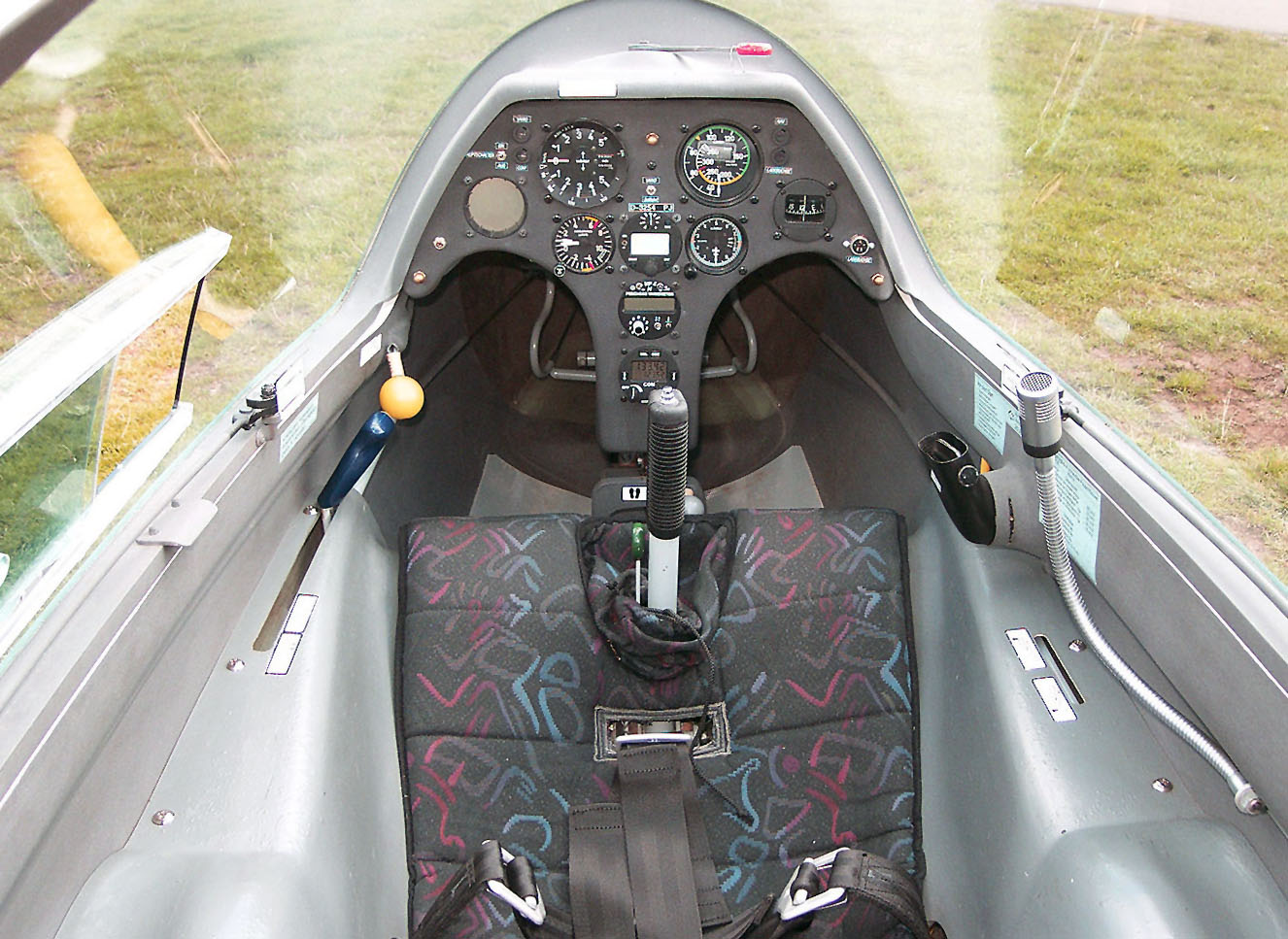 In a helicopter, the right hand (no matter which side the pilot sits on) is for the cyclic, which (for the post part) controls pitch and roll, and the left hand controls the collective and throttle, which together work to add and remove power from the aircraft. This also feels fairly natural to pilots who are used to stick in the right, throttle in the left. The big difference is that the collective is an "up/down" control like a Johnson bar, not a "forward/back" control, and you put it down to reduce power and up to increase power. Furthermore, the throttle, when manually controlled, is a twist grip on the collective, which operates more like a motorcycle throttle. You can see the heli controls in this simulator. 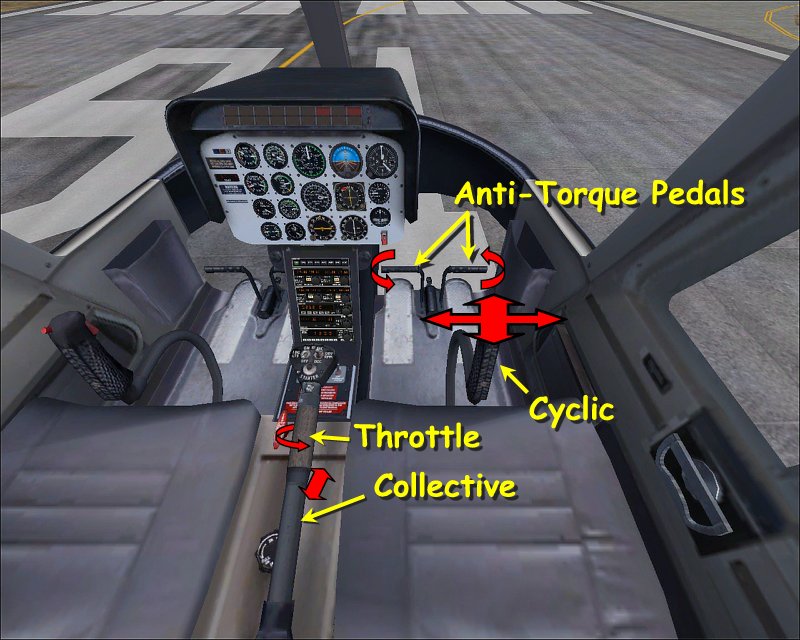 Not the answer you're looking for? Browse other questions tagged military flight-controls fighter or ask your own question.

22
Why are Airbus captain control sticks placed on the left when most people are right-handed?
11
Are there risks if the side joystick must be handled with a pilot's weaker hand?

11
Are there risks if the side joystick must be handled with a pilot's weaker hand?
15
Is it safe to fly a glider when I can't move the stick fully left and right?
9
Do fly-by-wire fighter aircraft automatically reverse the direction of control surface deflections during a tailslide?
6
Are there left seat qualifications specific to actual handling of the aircraft?
7
Why does the A320 use the rudder for lateral control in mechanical law?
16
Why not use the yoke to control yaw, as well as pitch and roll?
7
In simple mechanical stick linkages, is there crosstalk between the aileron and the elevator movement?
0
If pilot use rudder to roll the aircraft at high AOA in the F4 Phantom then one aileron from one wing and one spoiler from other will be deflected?