Most of the value of K is given by the formula: K = 1/(Aspect Ratio (AR) * Wing Efficiency (e) * PI). But you can further adjust K by multiplying it by a another constant, which I shall call K0.

You can enter estimated values for Cd0 and K0 and see if the results agree with the published performance data for the aircraft. I generally try to use Sea Level data since that eliminates the variances that arise at different altitudes. I also need to take care to determine the aircraft Weight or Mass that is used in computing the public data.

At Maximum Speed (Vmax), Drag should equal Maximum Thrust (Tmax). On a piston or propeller aircraft Tmax decreases with Speed, so you have to use the trial and error method to compute Vmax.

At Maximum Lift/Drag Speed (L/D max), Cdi = Cd0. This is the low point for Cd and Total Drag. There are equations for computing the Speed at L/D max.

At the Best Rate of Climb Speed (Vy) for a piston-driven airplane with a constant speed prop, Cdi = 3 * Cd0. There are equations for computing the Speed at Vy speed.

My understanding is that you must use the trial and error method to determine the Best Angle of Climb Speed (Vx) for a piston-driven airplane with a constant speed prop and I am not aware of any necessary relationship between Cdi and Cd0.

At Takeoff Speed, the coefficient of Lift (Cl) = Clmax. I am not aware of any necessary relationship between Cdi and Cd0.

I create an Excel spreadsheet which has a graph like this: 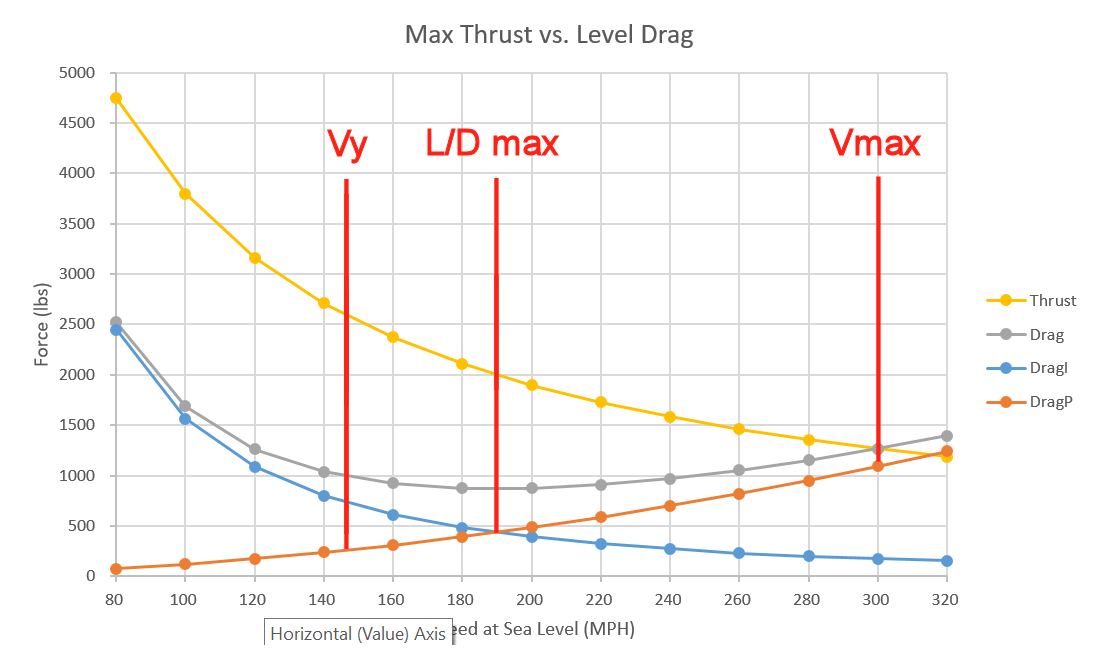 I initially leave K0 at 1 and insert different values for Cd0 until I find one where the lines for Tmax and Total Drag cross at the published Vmax.

I determine whether the lines for Parasitic Drag and Induced Drag cross at the published speed for C/L max. If not, I adjust Cd0 and K0 until they do, while not changing the computed Maximum Speed.

I can change the Thrust and Drag values a bit by changing Prop Efficiency and Wing Efficiency, respectively.

Given that the Drag Equation follows a fairly fixed plot, there may be situations where I get two of the data points to fit perfectly, but a third data point does not - which means that I must use values which generate the "best fit".

Also, reviewing the effect of changes in altitude, it appears that for both Vy and L/D max, the Cl and the relationship between Cdi and Cd0 remain unchanged as altitude increases. And Vy Speed remains equal to L/D max Speed divided by 3^.25.

5
How do you calculate total drag on a wing?
2
How can the zero-lift drag coefficient (parasitic drag) be calculated?
0
How to calculate the induced drag coefficient?
5
How do I obtain the max endurance altitude?
1
Why isn't Vy lower than the speeds for best L/D ratio and best glide ratio in an airplane with a piston engine and a variable-speed prop?
1
How can the lift induced drag for a wing be calculated?