What proportion of a flight do planes spend in the upper atmosphere?

While creating a methodology for the carbon footprint of flights, I came across some information which required the calculation of the distance travelled by a flight in the upper atmosphere. Essentially, aircraft emissions at higher altitudes have a larger climate impact than ones at lower altitudes and to compensate for that, we multiply the emissions when the aircraft is in the upper atmosphere by a constant like 5.2.

I have almost no knowledge about aviation and so it was hard for me to gather any information for how I could go about calculating the distance travelled in the upper atmosphere (and then calculate emissions based on the fuel consumption for that distance). I came across a diagram that showed the stages of flight and I guessed that I was attempting to find the proportion of the flight in cruise mode. 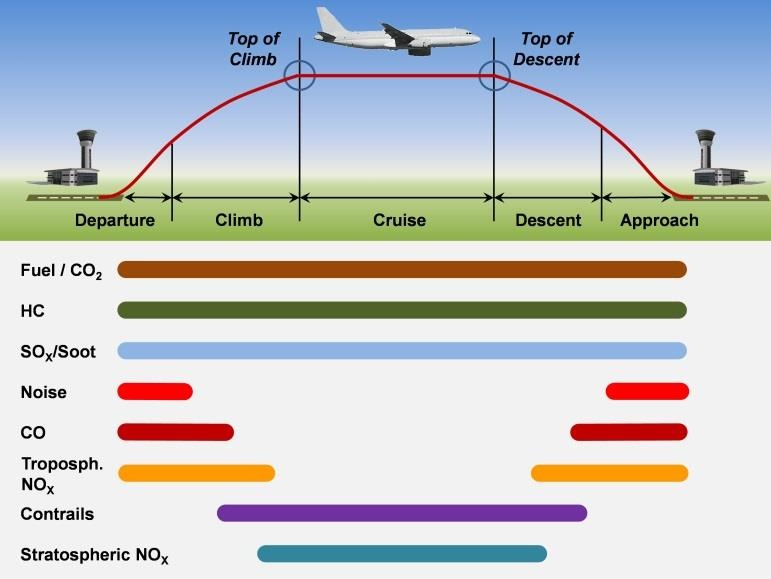 Could someone help me understand a way I could calculate the proportion of a flight that that the aircraft travels in the upper atmosphere? So far I'm expecting to multiply the total distance travelled by a given proportion, say 70%, given that the flight is long enough. Even if such a simple proportion isn't available, is there a way I could potentially calculate it given the origin and destination of a flight (and access to no financial resources for paid databases)?

Note: I was unaware that the 'upper atmosphere' had no standard meaning, so for this question defining it as above the troposphere is probably what I want as suggested by @Ben. This also restricts the question to commercial jets as pointed out by @jamesqf

From an unverified source, a typical rate of climb is 1800ft/min and the stratosphere is reckoned to begin at 33000ft. If we assume that the flight begins at sea level and that the descent is also at 1800ft/min then the aircraft will be below the stratosphere for 36 minutes and 40 seconds, and the remainder of the flight will be in the stratosphere. You would then need to estimate the average duration of a flight, and consider short hops where the maximum altitude may be lower. Perhaps look at flightradar24.com, grab a snapshot of what’s happening at one instant and assume that it’s representative of typical conditions. If there’s too much data to look at then select a random subset and analyse them. There are several assumptions here, so be sure to consider how valid they are and adjust your methods accordingly.

Not the answer you're looking for? Browse other questions tagged carbon-footprint or ask your own question.

3
Does the Enroute Phase begin at a 30NM distance from the departure airport?

7
What is the most carbon-efficient way to take off in a passenger plane?