How are compressor disks connected to the shaft?

I am trying to learn how compressor disks and shaft are connected each other. I don't have any idea about the terminology so I couldn't find anything useful.

Here is a section view of a sample and I indicated the connection area. What type of connection elements are used there? Anything related will be helpful. 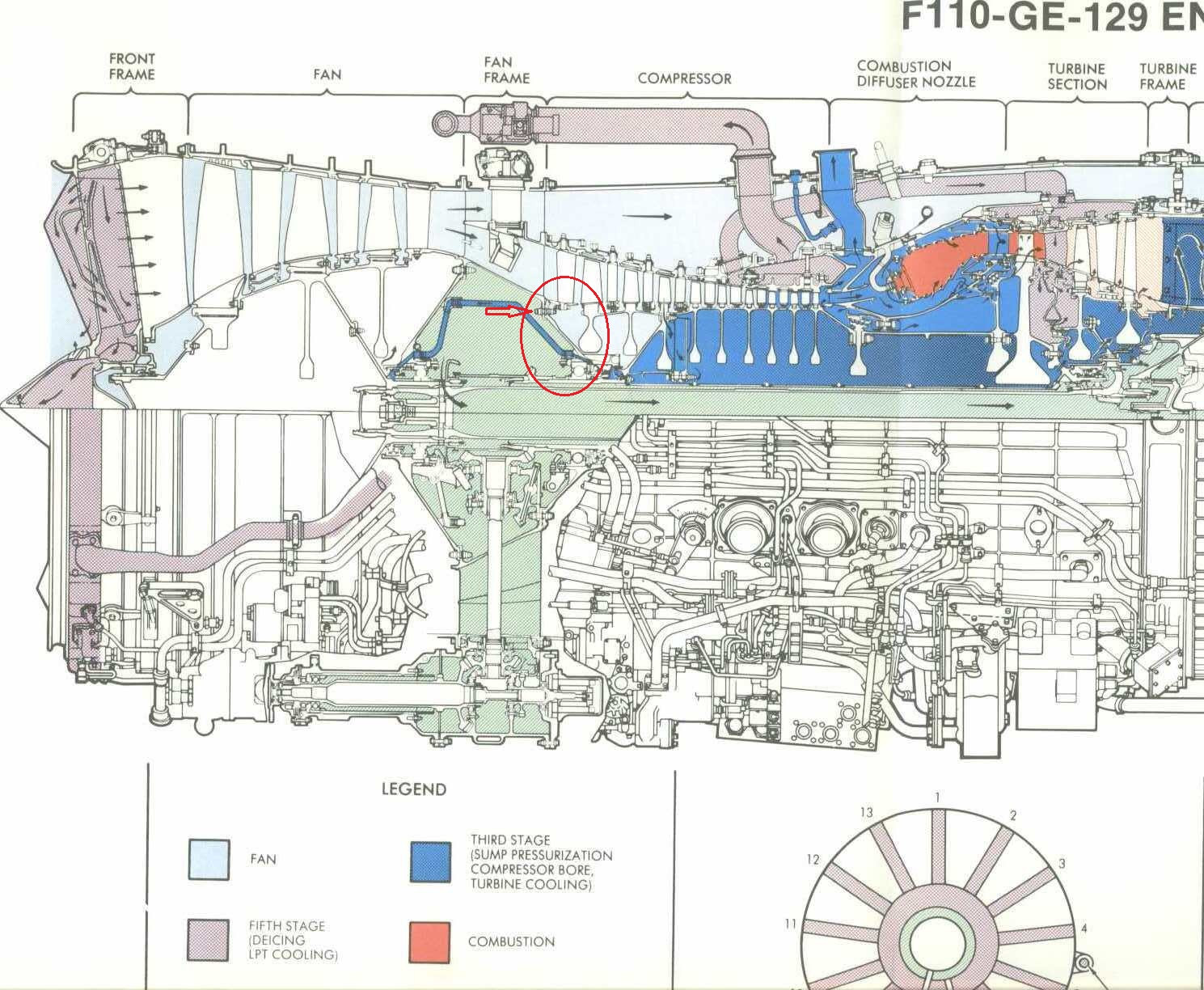 Here is a section view of a sample and I indicated the connection area.

What type of connection elements are used there? Anything related will be helpful.

From the title of your question I guess you assume the bolted element is a HPC rotor, and you might be wondering why a rotor would be bolted to a stationary element, the fan frame.

Indeed this would make no sense, and the explanation is the area you point to is not a HPC rotor but the rear seal support of the forward sump, a stationary element which role is to contain oil within the sump. The linkage is indeed a series of bolts.

The explanation below is related to this sump seal, but as you will see it also incidentally explains how disks are connected to the shaft as this plays a role in the sealing.

Rotors in the engine are centered within two frames, the fan frame and the turbine frame. The fan frame in addition has the role of transferring engine thrust to the wing. These two functions (centering and load transfer) are implemented using bearings requiring cooling and lubrication. Oil is used, and contained around bearings by closed sumps.

The area in your question is the end of the forward sump, located within the fan frame. The sump contains bearings #1 and #2 at the front and #3 at the rear. Bearing #3 is actually made of a ball bearing for thrust transfer to the fan frame and the mount point on the pylon, and a roller bearing for centering the HPC shaft. Here is a view of this portion for a CFM56-7B: 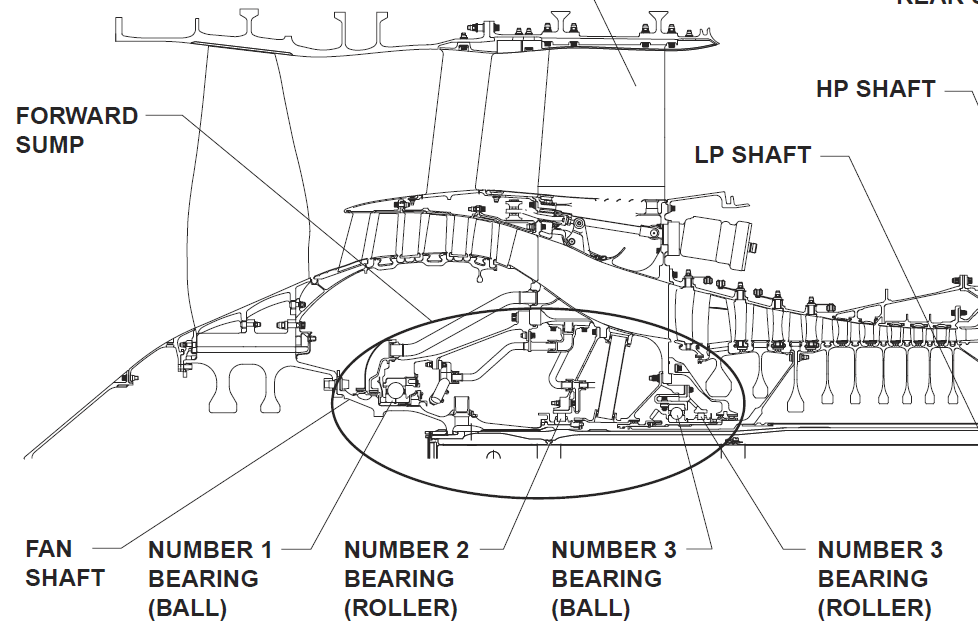 If you are not familiar with the bearings, sumps or seals, or the engine mounting points, the following questions will help:

If we focus on the rear portion of the sump, we see the sump is closed by a seal between the fan frame and the HP shaft N2: 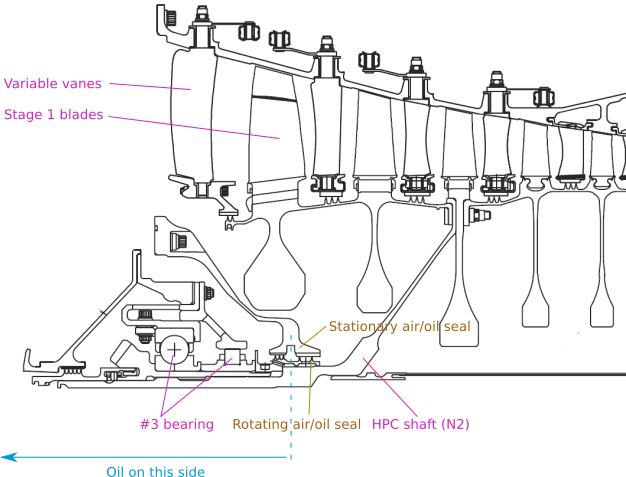 The seal is made of two elements: A stationary support centering seal tracks, bolted to the fan frame hub, and the labyrinth seal rotating with the HPC shaft. The bolts are the ones indicated by the arrow in your question. This looks like this: 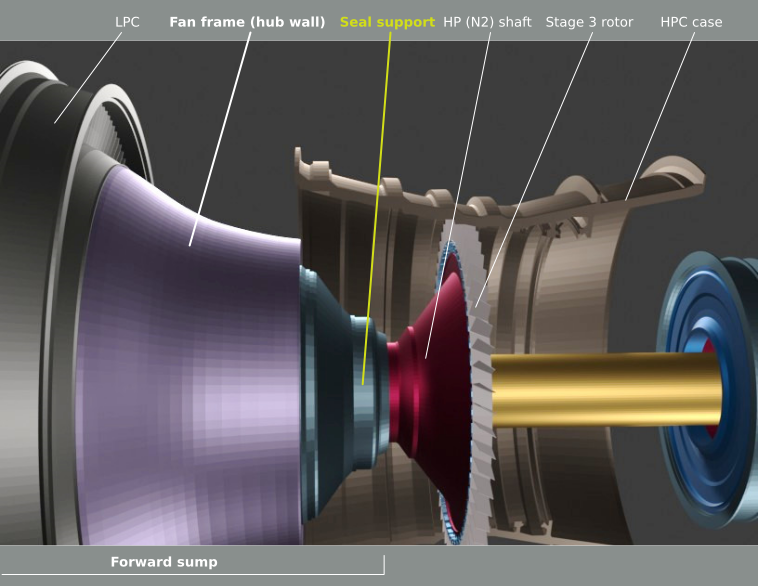 The seal support closes the sump. A part of the sump enclosure is given by the fan frame: The fan hub. Note also the red (magenta) N2 shaft which is bolted to the 3rd stage rotor and centered in the fan hub by the seal (the load is actually on the bearings within the sump).

A picture of the stationary part, with the tracks in white (that's the best picture I could find): 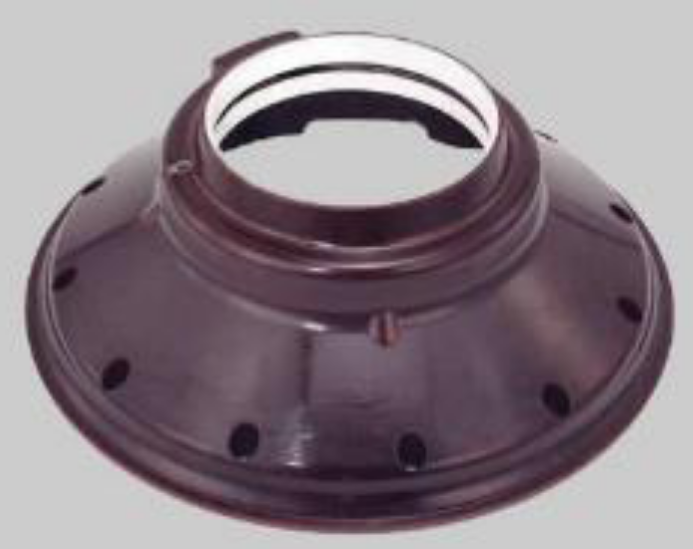 The labyrinth rotating ring is fixed to the IGB horizontal bevel gear sleeve which is used to spin the accessory box. 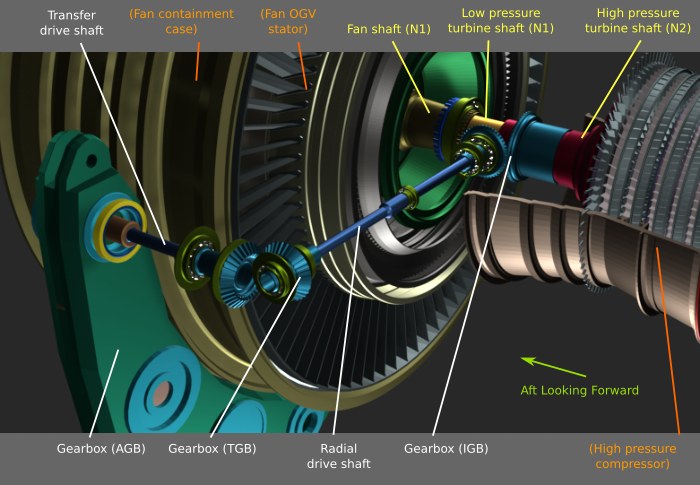 In the picture above we can see:

The stationary seal just close the green cavity by linking the shaft to the fan frame (the frame has been removed to show the sump).

See this answer for more.

Oil is prevented to leave the sump by the labyrinth teeth, but this is not perfect, so air is also injected into the labyrinth to push oil back into the sump. There are holes in the labyrinth ring to let air in and oil out. Air and a bit of oil fog not eliminated by the centrifugal filter are drained into the center pipe running up to the exhaust where they mix with hot air from the turbine (path used is indicated on the drawing in your question by arrows).

From Airbus, the role of the seal is:

The rotating air/oil seal provides the sealing of the aft end of the forward sump and acts as a locknut for the No 3 bearing.

In effect, this question is related to In a turbofan what holds the spinning axis?. This question has an excellent answer that closely relates to this question (but isn't a duplicate). The following figure is re-posted for a relevant answer. Credits go to user mins.

This answer hints to the given figure of the F110-GE-129, but may be equally valid for other engine types (as seen in the image above for a CFM56 turbofan engine, the image is very similar, this is because the CFM56 core comes from the GE F101, which was the basis for the F110), note that some differences are found, but the general idea to assemble the rotor disks are similar.

The encircled area contains the first high pressure compressor rotor disk (it looks as if it is dangling freely, but remember that the disks are rotationally symmetric, so this is basically a ring), this disk is bolted or more commonly, inertia welded (reducing structural complexity and the number of parts), to the next (second high pressure) compressor disk, which is connected the the next, etc. Sometimes, the disks are sets, so multiple disks are connected to another set or welded all together. Note that the high pressure turbine rotor is (or sometimes rotors are) also connected to this drum.

The inertia welded 12-stage F101 (and the CFM 56) compressor rotors have only five structural parts and two bolted flange joints.

The third (high pressure compressor) disk expands or is connected to a hub (in the image above designated to be the N2 shaft). This hub contains a spline interface that is connected to the high pressure shaft, or makes up the high pressure shaft (such an interface is also present at the turbine disk, so there are two points where the drum attaches to the bearings). Basically, all rotor disks form a drum with an extension to mount the drum to the shaft to form the spool.

I have found detailed cross-sectional diagrams can be somewhat confusing. Here is a video from a Canadian gas turbine mechanic who has hundreds of videos of their components & assembly methods. I think the answer to your question is a combination of splines, & nuts & bolts. If this video doesn't satisfy you, then search the rest of his channel, it is quite extensive.

Not the answer you're looking for? Browse other questions tagged jet-engine compressor turbojet turboshaft or ask your own question.

2
What type of bearings are used to support the shafts in jet engines?
30
In a turbofan what holds the spinning axis?
16
How are engines mounted onto wings?
7
What is a seal in aeronautics?
9
How is a turbine engine rotated for starting and inspections?
8
How does a labyrinth seal work when the engine isn't rotating?