Did the jet stream really stop the B-29, or was it just bad luck?

The B-29 bomber, used in WWII, was designed as a high altitude bomber, capable of operating from altitudes in excess of 30,000 feet. However, starting with their first missions to Tokyo in Nov 1944, the B-29s encountered a 200+ mph jet stream which made accurate bombing impossible.

After General LeMay arrived in Jan 1945, he reduced their altitude to around 20,000 feet - sometimes as low as 8,000 feet. Because of improved bombing accuracy, higher bomb loads and acceptable losses, the B-29s never returned to 30,000 feet (except for recon and atom bomb missions).

The public perception appears to be that the B-29 could not be used as a high altitude bomber because of the jet stream. (There were other problems, of course, but the jet stream always seems to be singled out as the reason.) 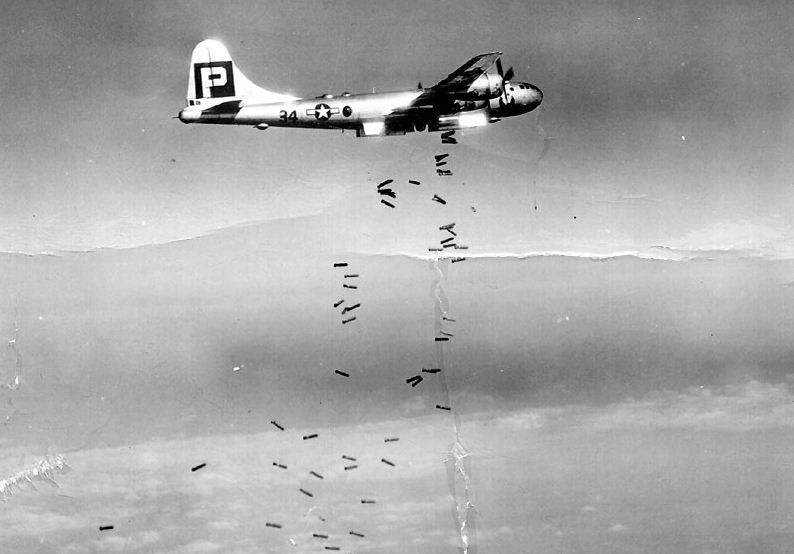 The picture above has been described as an illustration of the effect of the jet stream on bombing accuracy. See XXI Bomber Command

My understanding of the jet stream (including the jet stream over the US) is that it is stronger in the winter, fairly localized and often changes speed, altitude and location.

Vern Haugland of the AP wrote a lengthy article "World's Most Violent Winds Are Problem in Bombing Tokyo" [Evening Star, Washington, DC (Jan 8, 1945), Page A-2] which described, in great detail, problems caused by the winds encountered over Tokyo and the extreme cold at 30,000 feet.

The article did not use the term "jet stream". That term did not appear until 1949 when scientists published studies describing the discovery of "the jet streams of wind blowing from east to west around the world at different latitudes". [Evening Star, Washington, DC (Apr 20, 1949), p. A-6]

Thus, it is possible that, given their limited knowledge of what was happening, the military did not realize that what they were dealing with could have been a temporary phenomenon.

p.s. The picture above is probably not an illustration of problems caused by the jet stream because both the aircraft and the bombs should be traveling at the same speed within the jet stream. Instead, it could be illustrating the effects of wind shear, where winds at different altitudes are moving at different speeds.

Jets form along warm/cold airmass boundaries, such as the mid latitude Polar and Tropical air mass borders, where the warm side tapers off into a wedge shape at the top of the airmass at the tropopause. So jets form randomly at different locations along the writhing "belt" of Polar/Tropical frontal boundary that is always present along the mid latitudes around the earth.

It was a bit of bad luck insofar as Japan is at a latitude that places it frequently on the Polar/Tropical airmass boundary if the frontal conditions were right, so jets could frequently form at places that happen to be over a particular target. Jets were only dimly understood and were likely very difficult to predict with the weather technology of 1945. So the bombardier only knew he was in a jet when he was in it.

Surprisingly, jet stream problems notwithstanding, according to this article, bombing accuracy over Asia was roughly the same as Europe, with about a third of bombs hitting within 1000 ft of the aim point on precision raids (but the Norden was supposed to do better than that).

So I suspect that jet streams were an occasional problem (because they come and go), but the larger one was simply the vertical distance that magnified the Norden's error band, which was a problem in Europe and Asia. Also, even without being in a jet, if you imagine the variation of winds through 4 or 5 miles of air, and the fact that the Norden made its ballistic wind drift compensation based on the airplane's track/heading offset at its bombing altitude, it's not hard to see the overall problem, jet or no jet.

In Europe, precision was vastly increased when bombing altitudes were lower to the mid teens in the last 6 months, where the Norden really could place bombs with great accuracy (60% hitting within 1000 feet).

The B-29 could carry high explosive or incendiary bombs, or a mixture of both. High explosive bombs have a much higher terminal velocity, there for in the presence of appreciable cross winds, high altitude precision bombing with mixed loads would be nearly impossible.

HE bomb terminal velocity of 600 mph reaches the ground from 6 miles up in around 40 seconds. The crosswind would move it around 2/3 of a mile.

Incendiary bombs terminal velocity of 300 mph would take 1 minute 20 seconds with a drift of over a mile.

They weren't going to hit anything and General Le May knew it. The decision to go low and carpet bomb with incendiary bombs effectively destroyed most of the major cities, but inflicted massive civilian casualties from the firestorms created.

The above picture has been described as an illustration of the effect of the jet stream on bombing accuracy.

If the suggestion is that the physical effect of the wind shear around the jet stream upset the flight path of the bombs enough to be visible in a photo taken at close range-- that is highly unlikely and casts doubt on the credibility of any source making that argument. The jet stream was not the primary obstacle to accurate bombing from high altitudes with the B-29 over Japan.

Not the answer you're looking for? Browse other questions tagged aviation-history wwii strategic-bomber winds-aloft b-29 or ask your own question.

10
What was the first jet-powered supersonic aircraft?
2
What was the first production jet engine to use a semiconductor based control system?
12
Did the Stuka Ju-87 really have a radio altimeter? If so, when?
3
What was the first Russian jet designed with the use of area rule?
5
Was the adoption of conventional tailplanes as 'everyday aircraft' inevitable, or are there other designs that can be just as good?
9
Why was the An-225 built when the VM-T Atlant already did the job?
11
Has the "Foote takeoff" technique really existed, and how did it work?
6
Could Sudden Decompression Cause You to be Shot Out of the Tunnel on a B-29?