When a bomber releases a huge payload of bombs, why don't they collide with each other in mid air?

Below given are images of bombers releasing many bombs at the same time.

Why don't they collide with each other? 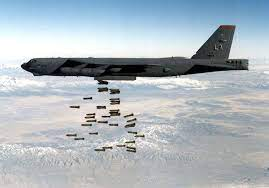 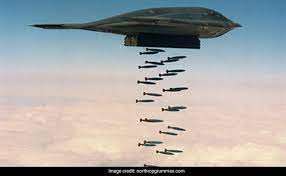 Because there's a lot of engineering effort to make sure the bombs are cleanly and safely released from the aircraft (safely, that is, for the aircrew, not for the recipients). Aside from the safety issues, it is also necessary to ensure accuracy.

The concern is in the first couple seconds after release when the bomb is moving through the air surrounding the aircraft. Once in clear air, gravity and aerodynamics keep them separate.

Much of it is controlled by the release sequence. If you look at the B-2 photo you can see that bombs are released in a left-right and alternating between the front and aft racks to maintain separation.

The USAF SEEK EAGLE Office is responsible for ensuring compatibility between the weapons and the aircraft.

If you’ve ever parachuted from an aircraft you’ll know that although you might expect to float gently away into the air, you do in fact drop like a brick. Bombs are typically released in a controlled manner and so they will tend to separate vertically as they fall. Given the significant weight of a bomb it’s most unlikely that there would be enough turbulence in the air to cause two bombs falling side by side to touch.

Then there is always the trusty Intervalometer which controls the rate or interval at which bombs are dropped.

The intervalometer generates electrical impulses that actuate the bomb release units. It may be set fore either selective or train release of bombs. When set at SELECTIVE, the intervalometer generates a single release impulse each time it receives an impulse from the bombardier’s firing switch or from the bomb sight. When set at TRAIN, the intervalometer provides a series of evenly spaced impulses. The number of impulses (up to 50), and therefore the number of bombs dropped, is controlled by a dial setting. The impulse frequency can be varied from 2 to 20 per second; it is controlled by matching two dial scales, one of ground speeds and one of distances between the impact points of successive bombs. When the desired spacing is matched with the actual ground speed of the aircraft, a small computing unit automatically sets the proper impulse frequency in the intervalometer.

Bombs aren't just laid together in a bomb bay and dropped out of the bottom of the bomber. They are connected to a launcher, like the Conventional Rotary Launcher in the B-52 (google that for nice pictures), that times the release of bombs to minimize any chance of overlaps during the actual launch process. In addition since the bombs are all the same size and weight and have the same aerodynamics, they tend to maintain the same relative distance from each other once they're launched because there is no difference in the forces acting on each bomb. If a gust of wind blows one bomb sideways, it blows all the bombs sideways the same amount, because they all have the same size and weight and aerodynamics.

And finally, on the modern battlefield bombers are no longer used for carpet bombing like in the pictures you posted. Instead they are dropping precision JDAMs onto exact targets marked by spotters on the ground. These are conventional bombs with fin kits that guide them directly to a designated target. Unless multiple bombs are being sent to the exact same target, they're going to diverge after being dropped from the bomber as their fins guide them towards their specified targets. The end result is, if the guys on the ground called for five buildings and a fortification to be bombed, there's going to be six bombs dropped, all going in slightly different directions, not a whole string of bombs carpet-bombing an area.

Not the answer you're looking for? Browse other questions tagged military bomber ordnance or ask your own question.

15
Why do air forces still use bombers?
20
Why do heavy bombers not carry air-to-air missiles?
10
Are strategic bombers still useful, or are fighters taking over this role?
26
What makes a bomber able to deliver nuclear bombs?
11
What are some disadvantages that come with a design like a B-2 spirit bomber?
9
How effective was WWII bombers self defense anti-air armament?
0
Is moving payload masses during flight to restore mass centering, or to avoid having to trim, a useful approach?
13
What are these pipes on an Avro Vulcan?
1
What were the common crew ranks on WWII US Navy flying boats and bombers?
6
What aircraft equipment produced the three recordings of unidentified aerial phenomenon released by the US Pentagon in 2020? What does black signify?