Is the total upwards vertical force (lift included) greater than the weight in a steady climb? 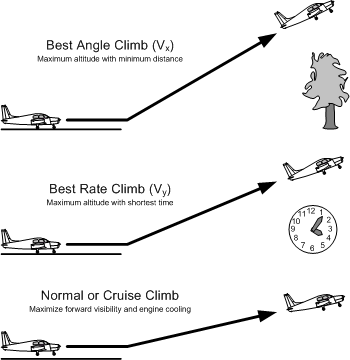 Related to questions on forces in a climb: if any aircraft is climbing with a constant velocity, is the total upwards vertical force (lift included) greater than the weight?

This question is purely a definition issue, and the answer is 'yes' or 'no' based only on which definitions you use. In Newtonian physics, a lot of complex interactions are modelled as single, lumped vectors which we call "forces". These forces share nice properties with vectors: notably, that we can decompose vectors into multiple vectors, or sum multiple vectors into a single vector. One of the main reasons to do so is to decompose a vector into components parallel to some (typically orthogonal) coordinate system.

An important observation is that there is no 'true' way of representing the forces acting on the airframe. While some decompositions are more popular than other, all are equally valid (if done correctly). I will take two examples, one of which arrives at your conclusion 'yes', the other 'no'.

Example 1. Decompose the aerodynamic forces on the airplane, parallel and orthogonal to the flight path. Call one 'lift', call the other one 'drag'. Let's assume 'thrust' is also parallel to the flightpath. Weight is represented as a single vector, orthogonal to Earth, and is not decomposed along the flight path. Now take all the forces that we decomposed along the flightpath, and again decompose them but now orthogonal to Earth. Now, only look at the forces pointing 'up', which in a climb (but not in a descent) removes the vertical component of the 'drag' vector, and compare it to the weight vector. With this elaborate procedure, we can conclude the answer is 'yes'.

Example 2. Combine all aerodynamic forces on the plane in a single vector instead of decomposing them into lift and drag, called the 'net aerodynamic force'. Leave the thrust and weight vector unchanged. Again, we decompose all vectors along the Earth reference frame. Now, we find the sum of all the upward components is exactly the same as weight. We can conclude the answer is 'no'. 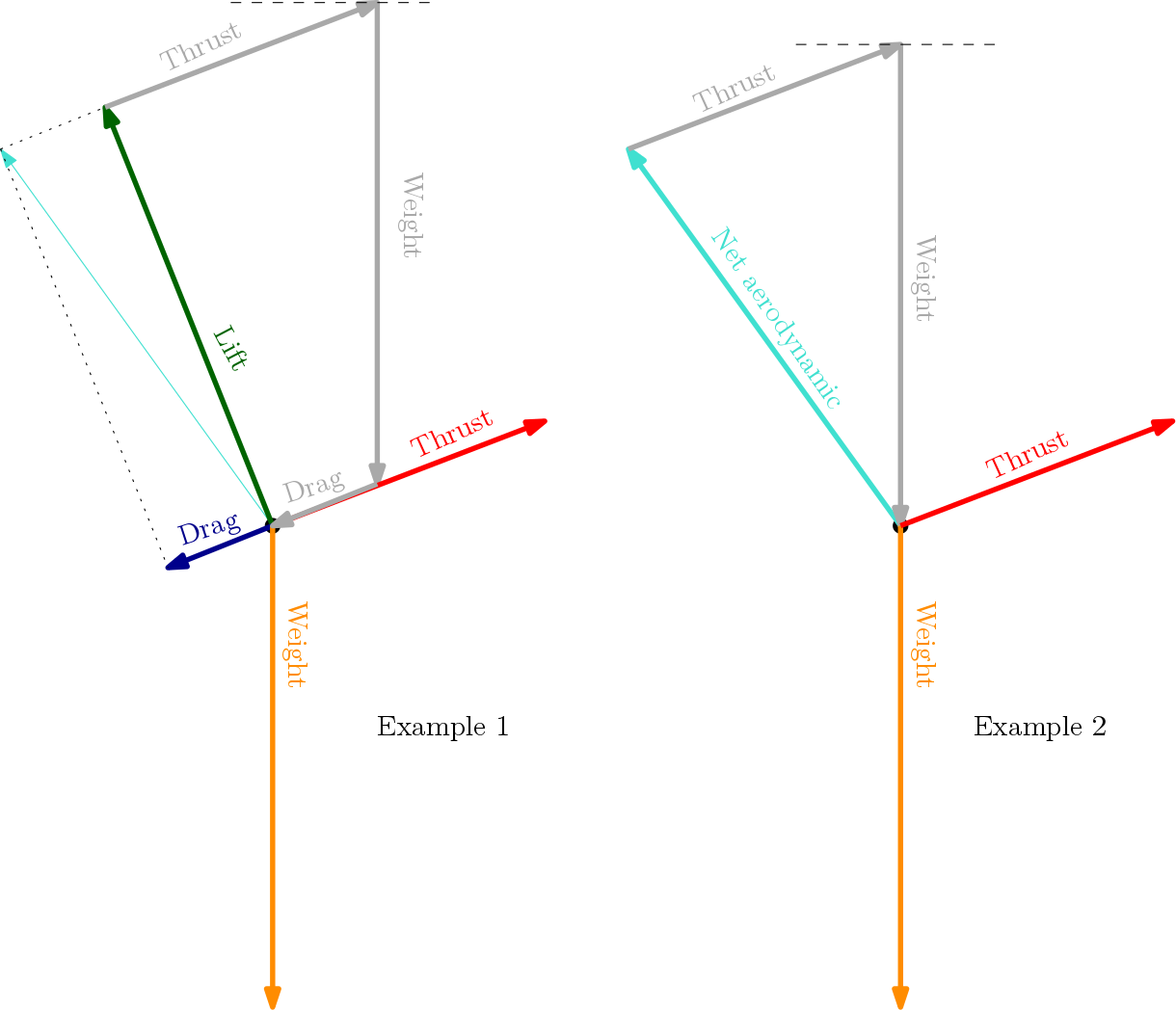 Note: the net aerodynamic force is shown in the left diagram for illustration only to show that it is the sum of lift and drag, and is not actually part of the force balance for example 1. 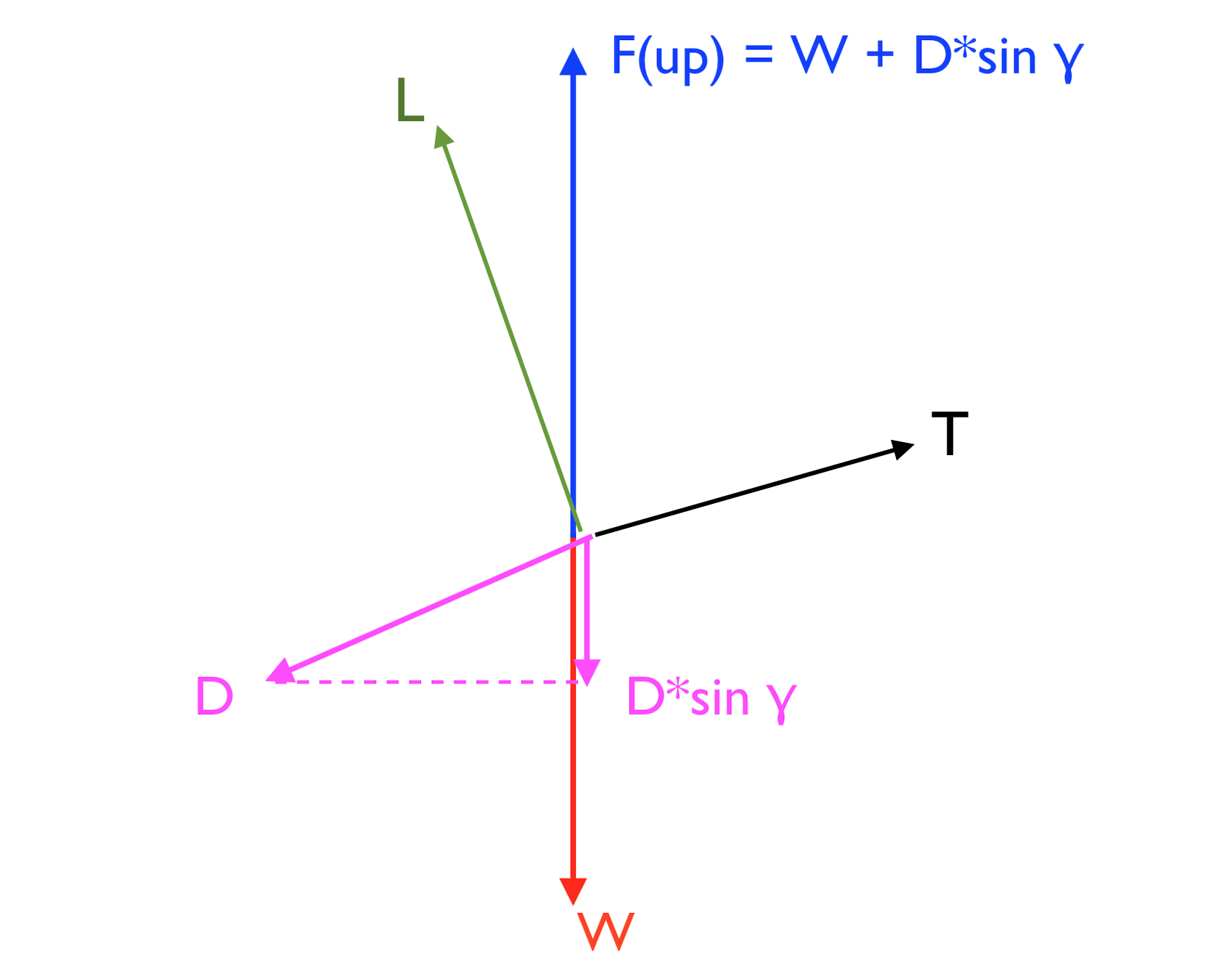 So in order to continue climbing, the total upwards vertical force - consisting of a combination of Thrust and Lift - must be larger than weight by a factor of D * sin $\gamma$

Yes, always, unless aerodynamic drag does not exist.

For winged aircraft, the above is impossible, therefor the answer is yes, always.

It is important to realize excess thrust is required to climb. Excess thrust closes the weight/lift triangle but does not account for aerodynamic drag, which equals the amount of additional thrust required to maintain airspeed.

Always there, in any climb, for any aircraft.

An aircraft that has a thrust to weight ratio of less than one simply must use a ramp while maintaining airspeed against drag.

The combination of excess thrust and lift support the weight, enabling steady state flight with 0 acceleration (from Gravity), while the remaining thrust at a given velocity opposes aerodynamic drag (part of which is being used to create Lift). 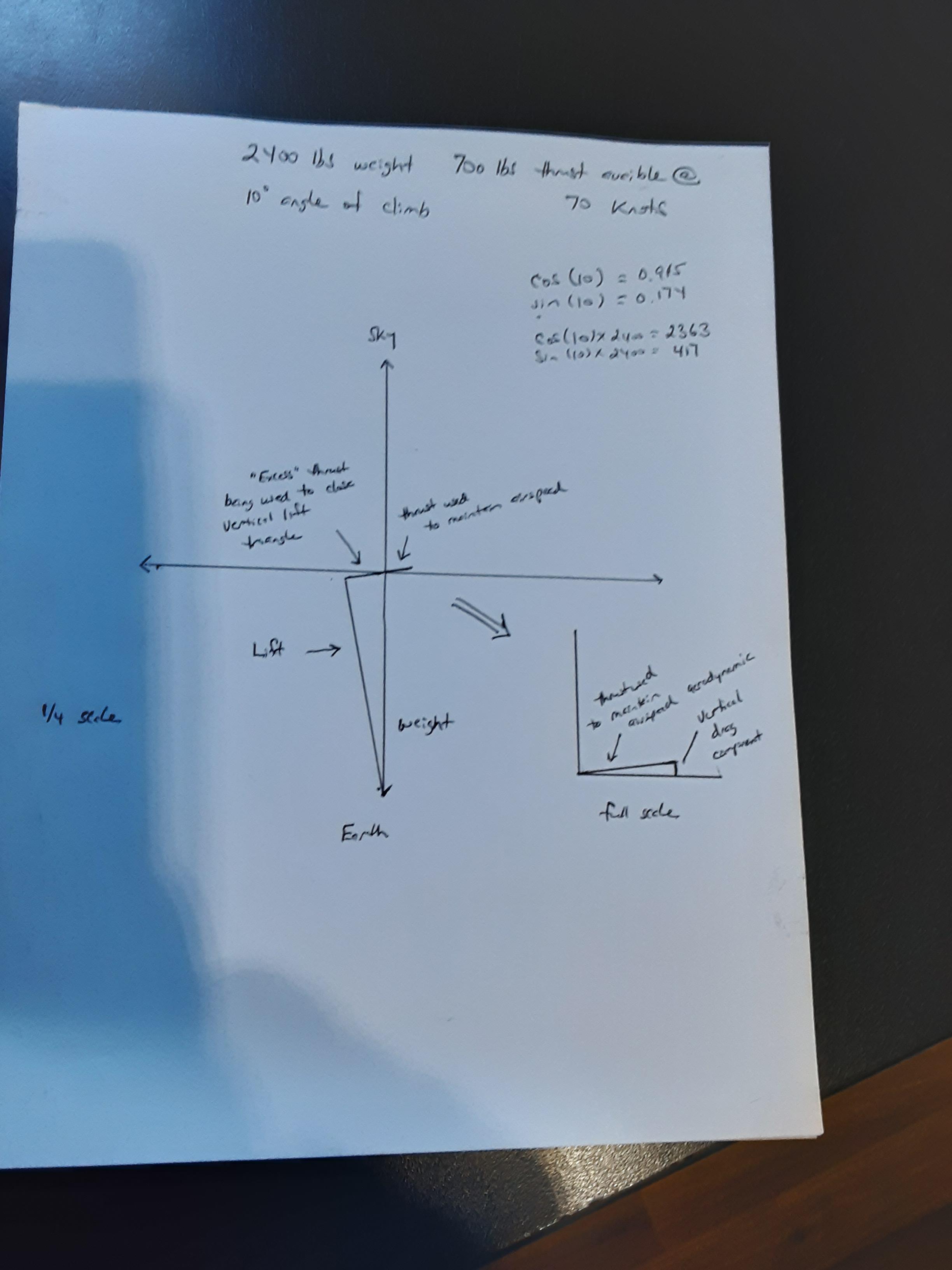 In level flight only around 300 lbs of thrust is needed, as the far more efficient wing can now bear all the weight.

If the net forces are zero, the movement will be steady, as per Newton's second law.

If the total upward forces are greater than weight we will have a vertical acceleration until drag brings velocity to a steady state.

If all vertical forces = weight the aircraft may be rising, hovering, or descending with 0 acceleration.

Not the answer you're looking for? Browse other questions tagged aerodynamics aircraft-physics flight-dynamics climb or ask your own question.

22
Does lift equal weight in a climb?
3
Is thrust larger than weight in a vertical climb?

52
Why do airplanes lift up their nose to climb?
32
Is excess lift or excess power needed for a climb?
22
Does lift equal weight in a climb?
4
How can an airplane keep going forward if it has no thrust?
0
What is the total EXTRA lift produced using an 80 deg flap and distributed propulsion?
1
Why is there no lift component when calculating rate of climb?
3
Is thrust larger than weight in a vertical climb?
7
In a banked turn, why does the center of gravity, rather than the center of lift, follow the path of a circular arc?
0
Does the nacelle strut experience reaction forces due to lift, drag, thrust, weight of engine during cruise flight?