Calculating angle of attack during bank

I'm programming a flight dynamics simulation and am running into issues with calculating the angle of attack during banked flight. I know what I'm doing wrong, but I'm not sure what I should be doing instead.

When an aircraft banks, angle of attack and lift are expected to increase in order to compensate for the reduced vertical component of lift: How does the angle of attack vary in turns? 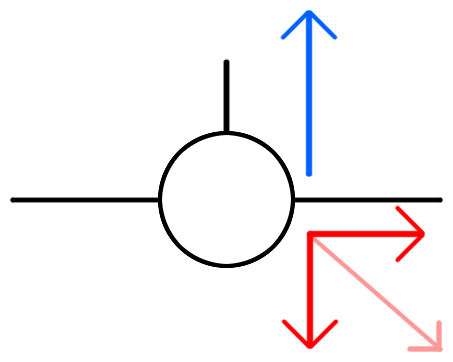 This means that it is generating more lift than gravity, causing the simulation to reduce angle of attack to compensate, and it stabilizes at a lower angle of attack. This causes issues like reducing drag, causing the aircraft to speed up as it banks, when I would expect it to slow down.

These are the (simplified) calculations I use to get the vertical acceleration components:

So I rotate the gravity acceleration according to bank, but not the lift acceleration. This is what causes vertical acceleration in the body frame to decrease with bank. I've tried flipping it and rotating the vertical lift component instead, but this causes issues with other forces still being calculated in the body frame, and the simulation becomes unstable.

My question is: how do I calculate vertical acceleration in the body frame in a way that acceleration due to lift does not stabilize according to only the vertical component of gravity, but the entire gravity force? Or, how can I get angle of attack to increase in a bank, not decrease?

It seems you forgot to add centrifugal acceleration. Lift must increase to produce the centripetal force that is needed for turning. I suggest you start with the desired turn rate and determine the amount of sideways lift from there. This in relation to the amount of lift for compensating gravitational weight will give you the bank angle.

Now it is helpful to split forces into their horizontal and vertical components.

Your equation for $L_z$ gives actually the full lift. You need to split this into its components, namely for becoming $L_z$ it needs to be reduced by the cosine of the bank angle.

Your $g_z$ would become zero without bank. It is always helpful to see what the expressions are for zero and 90° bank. Gravity works only in the vertical plane, so you need no modification for bank angle.

It's an axes definition issue, it is important to realise that altitude and weight are earth axis variables. 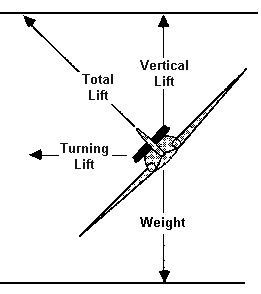 Centripetal force is provided by lift, not by gravity. Downward gravity force does not reduce when the aeroplane takes on a different attitude, it always pulls downward to earth with magnitude $m*g$.

in the statement "..angle of attack should be calculated using the vertical velocity in the body frame..", "vertical" should be defined in earth axes frame. In a bank angle, gravity is tilted relative to the body frame, however it will cause the aircraft to be accelerated in the gravity vector direction if the compensating force is not equal in opposite direction. "Downward" is always in the direction of gravity.

Best to compute this issue in earth axes via an axes transformation matrix, and then there are many answers on this site on how forces, AoA and altitude should be accounted for. Lift must be larger than weight in a bank, the pilot must increase AoA until the altitude remains constant.

It appears that you are assuming that there is a human pilot (or autopilot) in the loop, making pitch inputs as needed to prevent the aircraft from accelerating up or down as the bank angle is changed.

(You could also model what the aircraft tended to do on its own if the aircraft entered a bank but the elevator position remained constant. This would be a completely different--and much more complex-- problem than the one you appear to be describing. See these related ASE answers (1, 2) for more on this. There is in fact no tendency for the angle-of-attack to automatically increase as an aircraft enters a turn. Rather, in the absence of any corrective action on the pilot's part, the flight path tends to curve downward, leading to an increase in airspeed. The aircraft ends up following a descending helical path, at a higher airspeed than it started with. To a first approximation, angle-of-attack remains constant, but see the above link for why this is not exactly true.)

You've implicitly set up a scenario where thrust is varied as needed to equal drag, and you want to vary the angle-of-attack as needed to prevent the flight path from curving upward or downward as the aircraft enters a turn.

If I've misread your question, and your intent really is to describe how the aircraft will react on its own to entering a bank, in the absence of corrective input from a human pilot or autopilot, then your present approach to the problem has numerous other issues that need to be fixed. You would need to start by re-examining your conception of how angle-of-attack is actually governed during flight. What you would need to do, for a good first approximation, is hold the angle-of-attack constant, and model how much the airspeed needs to increase in order for the vertical component of lift plus the vertical component of (drag minus thrust) to equal weight, as the aircraft settles into a descending turn. For shallow descent angles, you can ignore the contribution from the vertical component of (drag minus thrust) and still be "in the ballpark", so that's a good starting point for figuring out how much the airspeed will increase when the aircraft is banked. The steeper the bank angle (and thus the steeper the descent angle), the more this simpler method will overestimate the actual increase in airspeed.

Not the answer you're looking for? Browse other questions tagged flight-dynamics flight-simulator or ask your own question.

5
How does the angle of attack vary in turns?
7
For light, GA aircraft, is there a "standard" turn, and what does that mean?
3
What are the effects of the tilted lift vector in a banked plane?
2
How do I make a simple model to simulate a banked turn?

5
How does the angle of attack vary in turns?
5
What is the time derivative of the angle of attack?
4
Finding Angle of Attack/Angle of Sideslip using East/North/Up Coordinates
0
Procedure for simulating nonlinear flight dynamics
3
How are pitching and rolling moments transferred from rotor to the body?
3
Does adding high thrust prevent a plane from stalling?
1
With flight dynamic equations, how do I return to positive alpha if alpha is always negative with negative w?
1
How do you quantify rudder effectiveness as a function of bank angle?