Can liquid hydrogen be pumped directly into a jet engine without a heat exchanger? Is it burned as a gas or a liquid in the combustion chamber? [closed]

This NASA research paper on H2 engines includes a diagram of Wesley Kuhrt's 1956 design for a hydrogen-fuelled engine, which has no heat exchanger: 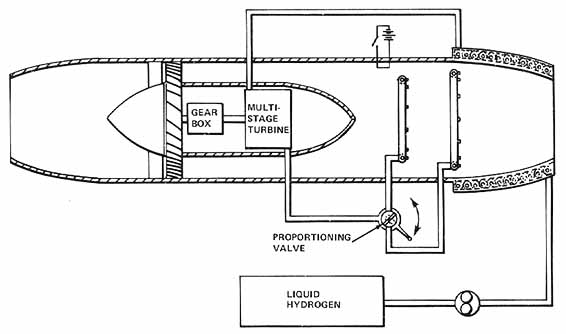 But, later on, it also has two diagrams showing hydrogen-fuelled engines with heat exchangers for warming the hydrogen before use; first, a Pratt & Whitney JT3C (J57) modified to burn hydrogen instead of kerosene:

(Image by Pratt & Whitney, via NASA.)

followed by the Pratt & Whitney 304, an engine designed from the start to run on hydrogen:

(Image by Pratt & Whitney, via NASA.)

In a jet engine using liquid hydrogen for fuel, does the hydrogen have to be warmed (presumably using a heat exchanger) and converted to a gas before it can be introduced into the combustion chamber, or can it be pumped in and burned straight as a liquid?

Hydrogen has to be in gaseous state to burn. The boiling point of hydrogen is ~20 kelvins, while oxygen boils at about 90 kelvins and freezes to solid at ~54 kelvins. It is therefore impossible to mix these two for combustion if hydrogen is in liquid state.

A non scientific answer to pumping liquid hydrogen directly to the combustion chamber is, that it will not work, because the evaporization of hydrogen would bind too much energy from the compressed air, thus cooling it and lowering the pressure to a state that no longer can support efficient combustion.

However, as elements might work in surpising ways under pressure, I'm not 100% sure.

Not the answer you're looking for? Browse other questions tagged jet-engine aircraft-systems engine engine-design hydrogen or ask your own question.

14
Has anyone burned hydrogen in a gas turbine?