Is there independent evidence that the Wright brothers celebrated Roosvelt's election in 1904 by a flight of over 5 minutes?

In a letter addressed to Octave Chanute, Wilbur Wright made the following statement:

“On the 9th we went out to celebrate Roosevelt’s election by a long flight and went around four times in 5 min. 4 sec. We unfortunately failed to set the recording anemometer and so did not get a measure of distance, but it was evidently a little over three miles. The trouble in righting the machine after swinging a short circle is evidently corrected. The machine landed without any injury and was put back on the track for another trial, but the wind had been working more and more to the south and we were unable to get another start.”

I guess, there should have been some witnesses, journalists, etc., present. Well then, who really saw the flight?

aviation-history
Share
Improve this question
edited May 27 at 7:21
Robert Werner
asked May 26 at 18:33

The short answer is No. The independent witnesses are missing. Only Wilbur, Orville, and possible their father, saw the Nov. 9, 1904, flight.

There exists a commented collection of old documents of the period 1903-1905 (most of them from 1904), over 200 letters and articles, all quoted in full, that studies, based on primary sources, whether the Wrights really flew a plane in 1904 (they claimed 105 landings for that year).

This book is titled: "The Wrights and their impossible 1904 flights" 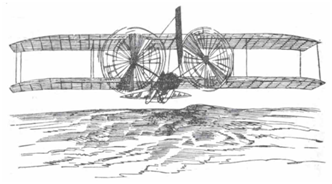 Regarding the existence of the Nov. 9, 1904, flight, besides the letter sent to Octave Chanute, this is the evidence I could find, in the above mentioned work:

In conclusion, the Press states that nobody saw a powered flight performed by the Wrights before December 17, 1904. The only possible witness (not really independent) of the Nov. 9th long flight could have been Bishop Milton Wright. However his diary just implies he witnessed the performance of that day. The father of the two inventors does not explicitly use the words "I saw".

If somebody else finds new evidence, in the book or from other primary sources not quoted there, I would be happy to see it.

48
Could the Wright brothers fly across the US today?
15
Did Clement Ader make the first flight even before the Wright brothers?
4
How did Wilbur Wright create and use the formulas he mentions in his letter to Octave Chanute?
5
Does a 1lb crow expend only 7.68 Watts to fly at 37 km/h?
2
Did the Wright brothers discover the three-axis control system for airplanes/gliders and the adverse yaw?
3
When was the first picture of the Wright brothers' 1903 plane published?
12
Is it possible for a plane to accelerate easily from 30 to 45 mph in flight while it struggles to reach 30 mph (the engine runs at constant power)?
3
I calculated that Flyer I and II (1903-04) of the Wright brothers were underpowered. Are there better (drag, lift) coefficients than those of Culick?