What aircraft equipment produced the three recordings of unidentified aerial phenomenon released by the US Pentagon in 2020? What does black signify?

I don't follow these things closely and my question is carefully scoped to ask ONLY about the type of aircraft equipment used and what the various gray levels in the images indicates.

In CNN "The Point" Video Barack Obama just said something very interesting about UFOs by Chris Cillizza, there are three snippets from videos which are described as follows:

In April 2020 when the Pentagon released three videos of what they called “unidentified aerial phenomenon” which amounted to a huge break in the government’s acknowledgement of their existence...

Below are cropped screenshots from my linked video, presumably from the three videos mentioned. The unidentified phenomena all appear as small black objects, sometimes with a lighter "halo" against gray backgrounds. If for example these are thermal infrared images, one might naively suppose that the black tone indicates a temperature far lower than anything else in the field of view.

Question: What equipment produced the three recordings of unidentified areal phenomenon released by the US Pentagon in 2020? What does the black tone of the spot in question actually signify? 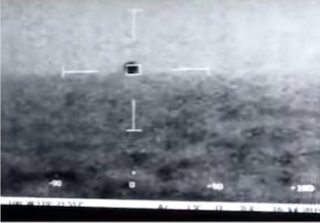 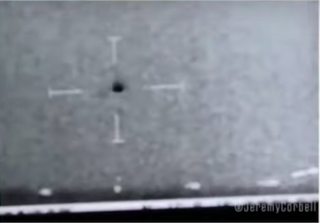 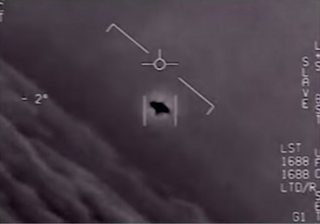 update: Screenshot from CNN's Retired US Navy Chief explains tech witnessed in UFO aircraft sighting around 00:13 shows a switch between opposite tone scales in the middle of a video clip, clearly the same clouds and object, just flipped in sign: 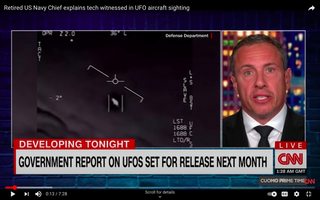 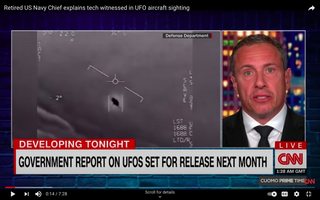 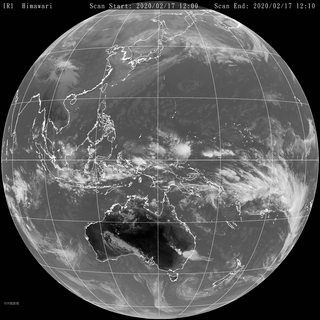 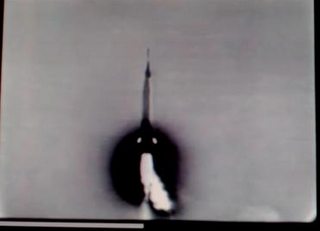 military aircraft-identification flight-instruments
Share
Improve this question
edited May 27 '21 at 13:02

There are multiple UFO videos/photos being asked about, I think. The clearest exhibition of the phenomena I know of are from the videos Dave Fravor released. In this video/timestamp that @uhoh found, one of those "GO FAST" encounters is annotated by the "To The Stars Academy of Arts & Science" Youtube channel as from an ATFLIR targeting pod, and variously in BLK (Black Hot) and WHT (White Hot) mode. I've taken the liberty of inexpertly combining three frames from the video in the following image: 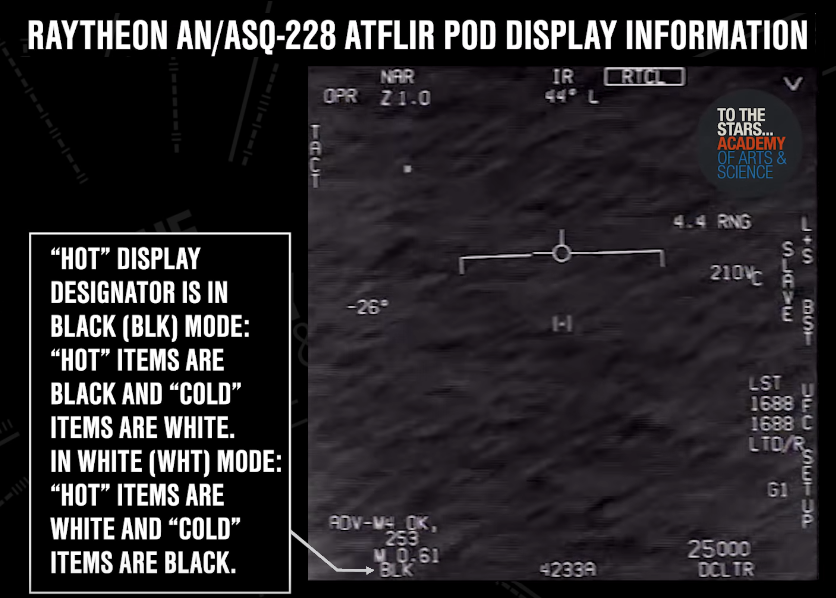 For this image, the UFO appears "cold." Others, including the ones in the CNN screenshots in the question from a different encounter, are "hot"--see e.g. the NavyTimes article Video shows apparent encounter between Navy pilot and UFO that shows the uncropped image with a black target and BLK mode displayed.

A word of caution in interpreting IR imagery: though the amount of infrared light coming from an object generally correlates well with its temperature, it isn't an absolute correlation. See, for example, Figures 10 and 11 of Design and Preliminary Testing of the International Docking Adapter's Peripheral Docking Target, which I'll reproduce here:

Some materials on those docking targets, and the flight hardware that eventually went on to fly on the ISS, were specifically chosen to passively appear "cold" in infrared by being mostly-reflective in the measured bands. Despite the docking targets being in approximate thermal equilibrium, the reflection of the sky over Houston is interpreted by the camera as starkly cold.

Not to say that you can't draw any conclusions on whether or not the objects in question are cooler or hotter than the background, just to say that it might not be entirely straightforward, especially from single still images.

We know that at least one of the sensor platforms involved was a Raytheon ATFLIR, based on information from their own website:

Fast forward 13 years to Dec. 16, when the New York Times published a report on the 2004 incident and a little-known Pentagon program that tracked such reports from 2007 until at least 2012. Included was the video of the possible UFO incident, which was captured by a Raytheon Advanced Targeting Forward Look Infrared sensor, mounted under one of the fighter jets.

The video was taken from an F/A-18 Super Hornet. This narrows down the recording equipment to either the ATFLIR or LITENING targeting pods. These pods perform essentially the same function. These pods can provide infrared imagery like that seen in the clip. Both pods are used on American military aircraft. I can't speak to the gray levels because I'm not familiar with the systems themselves, unfortunately. Hope this helps.

Not the answer you're looking for? Browse other questions tagged military aircraft-identification flight-instruments or ask your own question.

8
What does the crew of a long range miltary aircraft eat during a mission?
5
What are the costs and labour hours for converting a B767 airliner to an aerial refueling aircraft?
3
What is this transport aircraft, and why does it sometimes cary an air data boom when the Soviet Buran Space Shuttle is on top of it?
13
What does the letter E signify for the E-3 AWACS?
0
What is this jet aircraft appearing in the 2019 TV Series "Black Summer"?