Is it possible for an airplane to enter another airplane? [duplicate]

Ask Question
Asked 2 months ago
Active 2 months ago
Viewed 3k times
5
$\begingroup$
This question already has answers here:
Could a plane land inside or on top of another plane in flight? (4 answers)
Closed 2 months ago.

I was making some cool fictional airplane designs and realized that most of my larger airplanes have a bay inside that stores a plane or two. But then I thought, is it even possible to make a plane exit and enter a plane mid-flight? Such a plane to enter another plane would need to have folding wings to take up the least space when stored, and also because the plane it is entering would have to be significantly larger to have a fuselage wide enough to fit a smaller plane's entire wingspan. Note that I am questioning if it is possible to do something NOT in an emergency, but as a tactic or for other reasons. That being said, the question differs from an emergency situation due to the fact that the question is implying that the operation be done over and over, and not in a risky, dangerous, last-resort fashion.

This mainly branches two questions: Is it possible for a plane to exit a plane mid-flight, and if it is possible for a plane to enter a plane mid-flight. Clearly the plane must enter and exit through the belly of the larger plane, because something like a large hydraulic arm would be necessary to "grab" the small airplane and allow it to fold its wings up before hoisting it into the plane. This came to mind after considering that the plane must folds its wings up before entering the plane, and it also must take at least 5 seconds to fully fold the wings. So, folding the wings mid-flight independently isn't a good idea: The plane will plummet without wings to lift it. And to exit a plane, I'm assuming the arm will have to hold the plane out of the bottom and allow it to fold the wings out before dropping it. But here's what challenges that idea: When the arm is holding the plane and plane's wings are extended, will the little plane's wings effect the flight of the Larger plane? (Since the arm is grabbing it, it is the equivalent of the large plane having two tiny wings below it) and also, what are the effects of dropping a plane mid-flight? Any help on this would be very, very appreciated.

Oh, and a side-question from the above: Would a plane large enough to fit another plane be large enough to reasonably carry the weight of that smaller plane? And if so, how will the larger plane fair considering the fact that such a hydraulic arm necessary for mid-flight entry and exit of the large plane must be considerably heavy?

aerodynamics weight theory
Share
Improve this question
edited May 26 at 0:39
Ginger
asked May 25 at 23:59

Why so? If you drop this condition, things become much easier, because you could attach the smaller planes externally and avoid folding the wings. And this was indeed tried and even used operationally.

The concept is generally termed as Airborne aircraft carrier. The first (?) and most obvious application of the idea was with airships, where the airplanes could indeed be stored internally. 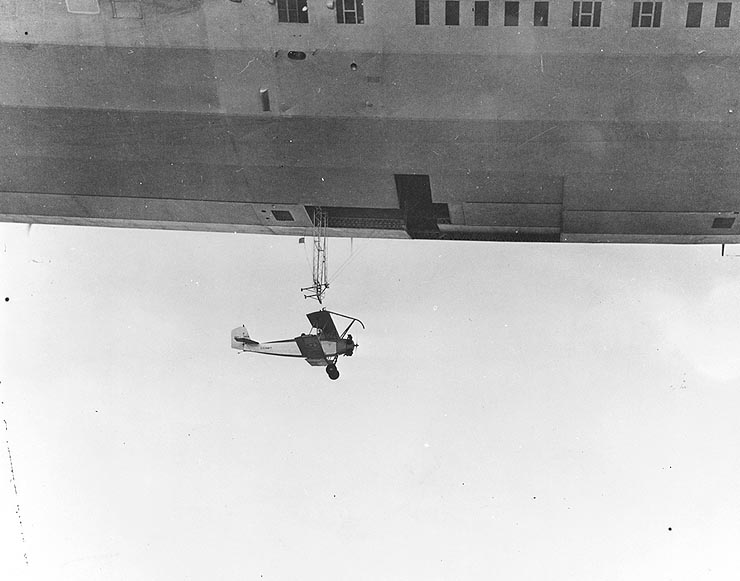 Russians extensively tried the idea in the 1930s with up to 5 fighters attached on or under the wing of a large bomber.

Admittedly, this configuration was mostly indended for deployment of the fighters, which would then land normally. This way it was used several times successfully for bombing raids early in the WW2. Recovery of fighters was tried, and some configurations even assembled in the air rather than on the ground. But it was quite difficult and required considerable skills even without any folding wings.

During the tests, on some occasions, there were problems (including at least one fatal incident) you are worried about, namely negative influence of the fighters on the carrier. Mostly they were related to failures, when the attachment broke down or didn't work as expected (sometimes due to incorrect control of the fighter during the process).

However, even pretty much the same idea as yours was explored in the 1970s, with the B747 or C-5 as the carrier and some "microfighters" as the payload. Apparently, the concept was deemed "feasible" but never went to an advanced stage of development. Yet today, the idea may be of some interest again with UAV aircraft.

It was actually done post-WW2 as part of the USAF FICON and Tip Tow projects which thought to extend the service life of the B-36 by giving it some escort fighters and photo reconnaiscance aircraft for damage assessment.

It ultimately wasn't put into production as it was rather dangerous and seriously degraded the performance of the carrier aircraft, meaning they'd be incapable of keeping up with the already slow bomber formations.

http://www.air-and-space.com/ficon.htm shows a lot of details of the actual system as built into the B-36 carrier aircraft, and photos of the parasite fighters involved.

"In parallel to both FICON and TIP TOW, project TOM TOM was being developed using a JRB-36F and two RF-84F. Using a newly designed articulated arm and clamp system, the RF-84F was intended to attach to the JRB-36F and be towed to the target site. The JRB-36F retained most of its cameras to record flights and the RF-84F would retain four of its .50 guns for defensive action for itself and the “Mothership.” Turbulence and vortices continued to be a problem for the RF-84F pilots, with one aircraft actually being torn from the JRB-36F in-flight. The program, much like TIP TOW was cancelled." from https://sacmuseum.org/project-ficon-and-the-b-36/ gives some details of the problems encountered.

In the end it was decided to retire the B-36 and build more B-52s instead.

For non-military missions, there were also the X-1 experimental rocket planes carried aloft by B-29 motherships and X-15s by B-52s, but those were incapable of being retrieved in flight.

Now...if you were to park the little jet on a platform extended from the back, and then fold the wings before pulling it inside, sure.

The question is, outside of fiction...WHY would you do this?

Sure, it's possible. There have been several experiments with so-called "parasite aircraft" over the years, some of which even managed some success before inevitably being canned for reasons of practicality and cost.

Docking them together is going to be the hard part. A hydraulic claw won't work; aside from the sheer weight of such a device, planes bounce around way too much to have a realistic chance of grabbing one mid-flight.

I'm picturing something similar to current midair refueling equipment. The big plane would trail a cable that engaged with a (deployable?) hook on top of the small plane. As the little one shut down its engines and folded its wings, it would naturally fall beneath the big one, and could then be winched in. Still not remotely practical, but believable enough for a fictional world.

Will the little plane's wings effect the flight of the Larger plane?

Yes, but only slightly. Any reasonably competent pilot could compensate easily.

What are the effects of dropping a plane mid-flight?

The big plane will suddenly be a lot lighter. The pilot would need to push forward to avoid climbing (although, come to think of it, they probably want to let it climb, at least a little, to reduce the chance of a midair collision). It would, in fact, be very similar to dropping a bomb, so you could look up info on big bombers for inspiration.

Shouldn't be a problem. After all, big cargo planes carry multiple fighters to deployments all the time.

How will the larger plane fair considering the fact that such a hydraulic arm necessary for mid-flight entry and exit of the large plane must be considerably heavy?

As mentioned above, a hydraulic arm would be the least likely part of the little scheme, which is why I recommend cables and winches instead.

Landing a plane inside another plane would entail the airspeed falling to zero, which would be possible during parabolic (zero-g) flight, although the control surfaces would become inoperative, so some kind of thrusters might be required. Failing that, if the larger aircraft were open at both ends it would be rather easier. I’ve seen paragliders deploy from helicopters and microlights; in principle many types of aircraft could be deployed in flight provided that they can stay within their safe envelope while adjusting to the airflow.

Not the answer you're looking for? Browse other questions tagged aerodynamics weight theory or ask your own question.

7
Could a plane land inside or on top of another plane in flight?
30
Can a fighter jet land on a modified airliner?

13
Could a plane be constructed to be fly in fixed-stick roll-stable circles?
23
Would an aircraft with contra-rotating propellers longer than the plane's wingspan be able to fly?
7
Would a 90 kg object jettisoned from an aircraft create a detectable movement?
5
Is it possible to maintain horizontal flight with the angle of attack above critical value by increasing speed?
1
Is it possible to design a GA plane with a 5' -10' wing span?
0
Pitching moment as a pure moment and its measurement with a homemade force balance
1
How to determine individual wing loading of a triplane for stress analysis?
4
Do wings on a plane need to be in the same plane horizontally, or can one wing root be 6" lower than the other?
2
Why does the NASA X-57 need a “gust control system”?