What is the lifespan of a level D simulator?

We have a few interesting questions about the normal ways aircraft end their lives. What about simulators? How long do they typically last? What is the typical reason for retirement?

I am particularly asking about high level simulators used for airliner type ratings.

This question was inspired by discussion of the time taken to reboot a simulator: Do Flight Simulation Instructors stop the simulator before a simulated crash?

flight-simulator economics
Share
Improve this question
edited May 25 '21 at 8:38

As long as it's maintained, and replacement parts are available, there is no limit. Although maintenance could end up costing more than the simulator itself:

CAE says the Series 5000 will offer a 25% reduction in lifecycle costs, which tend to be two to three times the original cost of the simulator during a 20-year lifetime (...)

The 20-year lifetime mentioned above is what would a training center expect, as that's typically how long an airliner model stays in service in sufficient numbers to promise a continued demand.

Lifespan of a Level D simulator is: as long as the maintenance costs are justified. 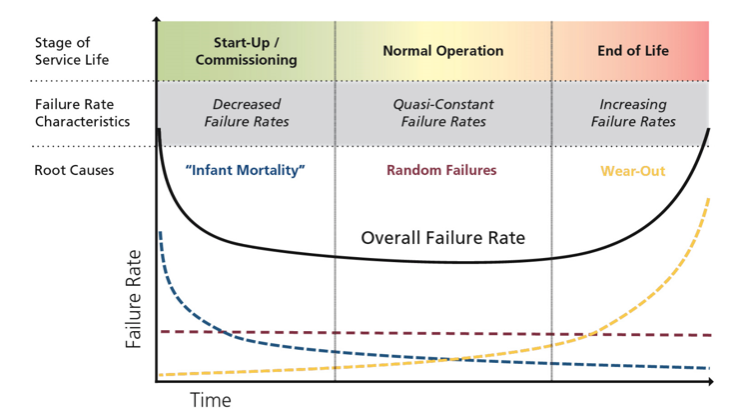 Maintenance costs of a simulator is according a typical bathtub curve, with the right side of the curve forever climbing up and up. Like with operating and maintaining an old-timer car, as long as spare parts can be purchased it is only a matter of justifying the costs.

New Full Flight Simulators are produced for new aircraft types. As long as an old aircraft type is still flying, there will be pilots that need to be trained on a Level D simulator constructed decades ago. There will be fewer and fewer of the old type simulators around, so training on an oldie may be very expensive indeed.

But spare part availability is the key. The real-time computers, I/O systems and analog electronics of the early 90s are really hard to find nowadays. But even then there is a solution: replace the old simulator sub-systems with modern ones. Host computer, visual, motion, control loading, audio, I/O, Instructor Operator System, weather radar...Not a cheap option, by the time all relevant systems are replaced the upgrade costs are higher than that of a newly constructed sim. But the costs can be spread over several years, with only the most pressing ones tackled year-by-year.

I know of several Level D sims constructed in the early 90s that are still in operation. Indeed the B737-200 in the museum mentioned by @ymb1, there is also one in Jakarta operated by Sriwijaya.

We're upgrading an 1993 Level D sim at the moment. Almost 30 years old, targeted future use of over two decades...

Not the answer you're looking for? Browse other questions tagged flight-simulator economics or ask your own question.

31
Do Flight Simulation Instructors stop the simulator before a simulated crash?
22
Under what conditions do airliners retire aircraft and sell them to other airlines?
26
What is the lifespan of commercial airframes (in general)?
13
What limits the lifespan of helicopters?
7
Why are some aircraft's life limited by both cycles and flight hours?