Does too big an angle of decalage make the horizontal stabilizer to stall?

This styrofoam airplane has two positions for stabilizer. When put in the upper one, the plane flies in a circle.

Is the stabilizer now stalled because the decalage angle is very big?What happens with the airflow over wing and stabilizer in this configuration? 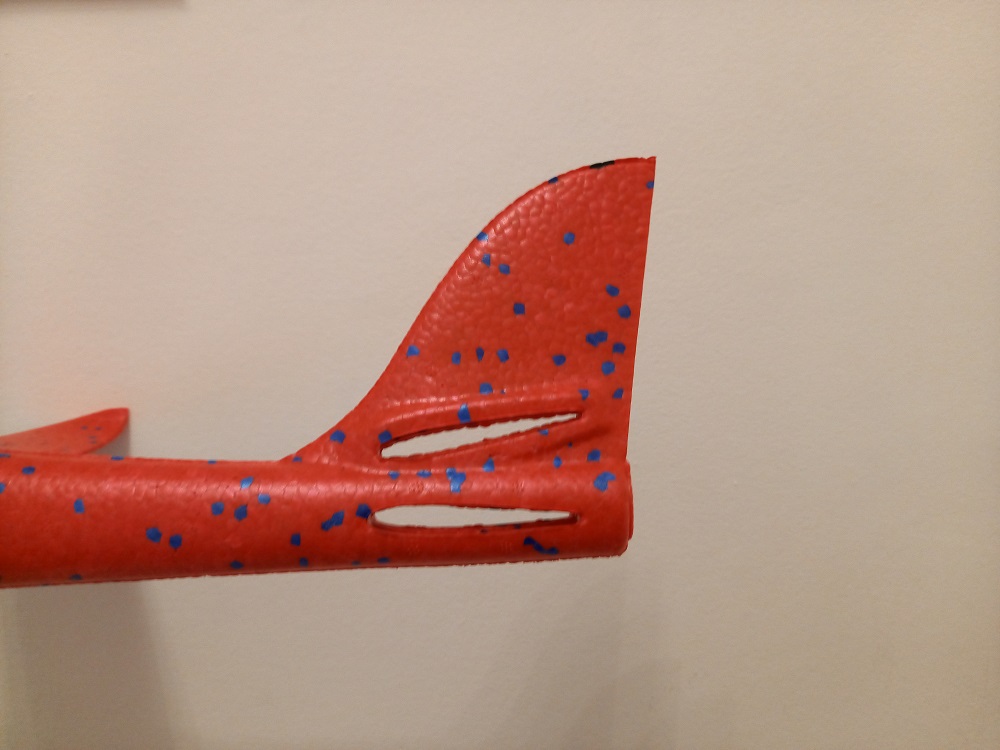 stall glider model-aircraft
Share
Improve this question
edited May 16 at 10:14

Declage controls the AOA to which the static stability forces will be focused with no control input; in other words, the hand's free AOA/speed. A higher declage angle is the same as increasing elevator input and holding it there.

It changes the trim force balance (nose down pitching moment from the main wing, C of G relative to wing center of pressure, and other appendages that generate pitching moments, opposed by the nose up pitching moment from the tail) to occur at a higher AOA. Airplanes with moveable horizontal stabilizers, like most jets and a lot of light planes like the Cessna 180/185 family, have what is in effect, adjustable declage as their method of changing trim. What you are doing by sticking the tail surface in the different slot, they achieve by cranking a screw jack to move the front of the same surface up and down for the same result.

So the tail won't stall at the moderate angle variation there, it'll just drive the main wing to a higher AOA to achieve trim equilibrium, and your glider will trim to a slower speed. If designed properly, if you keep increasing the declage, the main wing will be driven to its stalling AOA, and the aft Center of Pressure shift that occurs at stall will cause the nose down pitching moment to overpower the tail's downward lifting force and the glider pitches over before the tail's airfoil itself stalls.

The result is, when you throw it with the tail stuck in the upper slot, it will pitch up harder for the same throwing velocity as it seeks its higher trim AOA/lower flying speed (if you throw it at exactly its trim speed, it's already in trim when you release it and will just glide straight without pitching).

So bottom line; the lower slot is a "fast slot" and the upper slot is a "slow slot". The glider will trim to a lower AOA and a higher speed on the lower slot, and vice versa on the slow slot. That's the practical result of the two options.

The decalage angle of the upper horizontal stablizer slot was measured as arcsin × (.4/2.0 cm) = 11.5 degrees. This symmetrical airfoil will have a high coefficient of (downward) lift when thrown, which would immediately increase the angle of attack of the wing (raise the nose).

11.5 degrees Angle of Attack may be close to stalling, but even if it were stalled it would continue to generate lift.

The only way it could remain stalled would be if the weight were way too far forward. The glider would just crash into the ground.

If your Center of Gravity was set slightly forward of the wing center of lift (read instructions for your plane as to the where CG should be), the tail will pitch your wing to its correct angle of attack, and both AOAs will be well below stall AOA.

So, if you want to throw that glider off a hill, use the upper slot, set weight forward, and it will fly at a constant speed until it runs out of altitude. Do not try to throw it too hard when you launch it.

If you want to throw your glider hard for distance (without a hill), move the weight back and use the lower slot. This glider will fly at at variable speed until drag slows it down.

CG (weight) setting is critical in both cases. Try moving it back and forth until the plane flys the way you like it. (Some free flight models allow you to move the wing. This is a similar approach).

Not the answer you're looking for? Browse other questions tagged stall glider model-aircraft or ask your own question.

7
Does “trimmed for current speed” mean that the plane will do whatever to maintain the current airspeed?

5
Is it possible to maintain horizontal flight with the angle of attack above critical value by increasing speed?
10
Is this paragraph about the dihedral effect in the FAA's Glider Flying Handbook correct?
5
Definition of a Deep Stall
14
Why does a stall decrease lift, rather than increasing it?
1
Aerodynamics and fuel consumption of a powered glider
1
How do aircraft stall warning systems handle (or not) asymmetric-stall situations?
7
Why do aircraft stall warning systems use angle-of-attack vanes rather than detecting airflow separation directly?
1
Does the center of mass for an airplane have to be over the wings?
1
Helicopter retreating blade stall: Increasing the fwd speed decreases the tip speed on retreating side and angle of attack. So why limit on V_n.e?
2
Does dihedral improve roll stability in gusty conditions?