Would this mechanical apparatus be a new means of creating aerodynamic lift? [closed]

I recently came up with a conceptual idea for creating aerodynamic lift which would use an unconventional centrifugal impeller. I would like to know if this conceptual design of mine is something that has already been built and tested in the past.

I have created some CAD drawings (shown below) to illustrate what this mechanical apparatus would probably look like. Its primary components would be a centrifugal impeller with two rows of blades, a motor to turn the impeller, and a curved panel which would be fastened to the fuselage or to a wing of an aircraft. I want to point out that the curved panel would not rotate along with the impeller, rather the centrifugal impeller would rotate around the curved panel.

I am thinking now that it may be better that the outer row of blades be backward-curved in order to reduce turbulence and to maximize the static air pressure drop along the top surface of the curved panel. 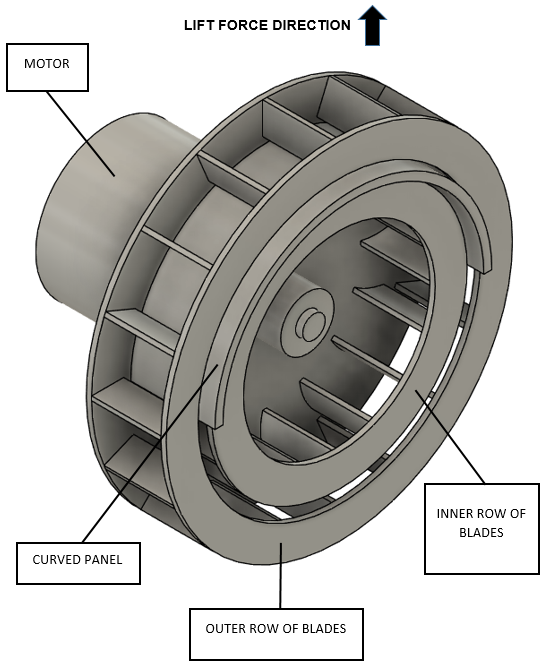 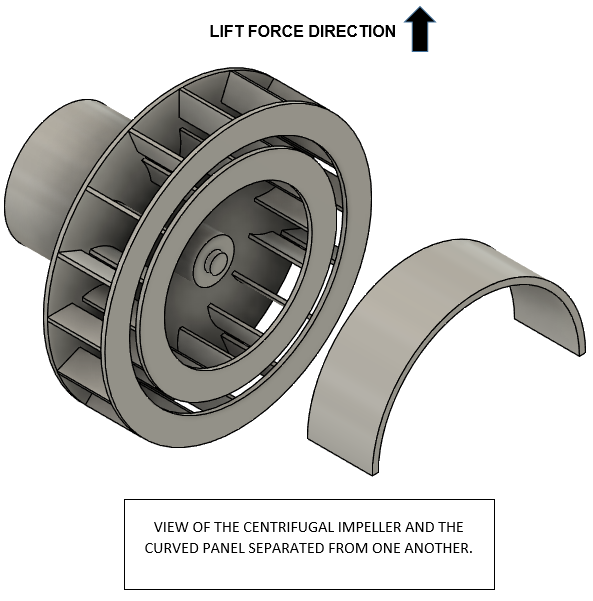 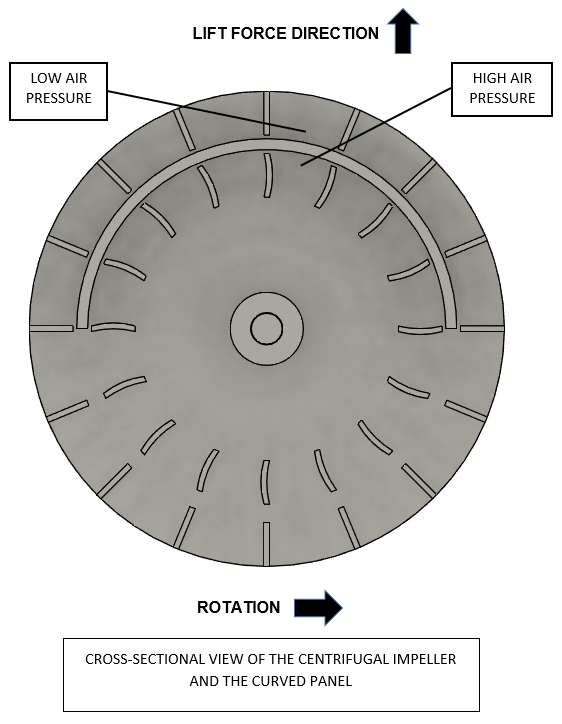 Would this mechanical apparatus be a new means of creating aerodynamic lift?

Yes, this device would produce some thrust. If oriented properly, this thrust could be used to lift a weight. But it would be extremely inefficient when compared to a standard airfoil, such as a wing or helicopter blade.

What you've basically created is a centrifugal pump without a case. Air would enter the "front" of the device (assuming the motor is the "back") just like a regular centrifugal pump, but without a case, it would be sprayed in all directions, including at an angle out of the "front". The curved panel would partially block the radial flow of air upward, creating a net upward force. But the fact that air exits at all angles, not just straight down, means that the various flows would partially cancel each other. What's worse, a lot of the air mass that emerges from the "front" would be drawn back into the incoming air stream, which would consume some of the motor's power but wouldn't contribute to the net thrust at all.

In short, I would be very surprised if this device could match even 1% of the performance of a simple ducted fan of the same power rating.

It's kind of hard to explain what I mean in words, so, here, have some bad, hastily-created images instead: 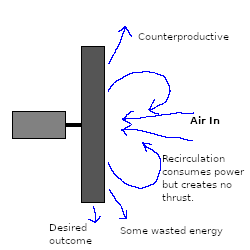 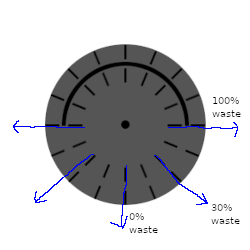 What you appear at first sight to have is a hybrid between the cross-flow fan and the paddle wheel, with a dash of the centrifugal fan thrown in. I have never seen it described, for example it is not discussed by Foshag and Boehler. I suppose that technically I can only give my opinion, since if nobody has written about it then one cannot declare a factual judgement. The device appears at best highly inefficient, I'll try to explain why.

First of all, recall the fundamental principle of lift; any heavier-than-air craft must accelerate air downwards, to create a reaction against that acceleration. That reaction is the lift.

The centrifugal fan throws air outward, typically collecting it in a duct and pointing it downwards. Accelerating that airflow down creates an upward reaction against the duct, i.e. lift. But I have never seen it used on an aircraft (in an engine it acts as a compressor).

The cross-flow fan uses subtle shaping to entrain air from one side and blow it out the other. Again, it is reaction against the acceleration of the air that provides lift. It has been known since Victorian times. It is a common form of fan in low-profile devices, such as small hot-air room heaters. It has been adapted as an aircraft wing relatively recently; checkout the FanWing.

The paddle wheel is the least efficient. It cannot accelerate the airflow beyond its own tangential velocity, which limits its ability to generate lift. Pressure differentials obtained by mechanical means are far less than those obtained aerodynamically for the same amount of work. This is why the centrifugal fan is used to accelerate the air along a duct or similar surface, not just to exert a pressure.

So your device will have low efficiency as a lifting device and once it starts to move even slowly, crossflow effects will quickly dominate. Remember too the fundamental principle of lift; if there is no device directing the air downwards, there will be no downward acceleration for the fan to react against and produce lift. You have identified no such device. What I would suggest you have come up with is an inefficient crossflow fan, in which your curved panel acts as a poor man's half-duct (and compared to the flyable FanWing is upside down, which is worrying).

You could put a shroud around it to eliminate the crossflow effects, with a downward exit duct and a central intake duct, and then it would just be a crude and inefficient centrifugal fan.

These issues might explain why nobody else has bothered to describe it before now.

No, not new, as pressure differential is the key to heavier than air flight.

In air, your device will also pull itself forward, so you now have the 2 necessary components of flight, thrust and lift. Theoretically, it works, but ...

Things that roll on the ground such as trucks and locomotives can be a bit heavy, but with aircraft, weight savings is essential.

Thrust and lift per kilogram vs a prop/wing or even a helicopter...

Sorry, not even close. For successful applications, one must either find a new niche, or be better than the competition at an existing one.

The closest the "mechanical apparatus" comes to being aviation related can be found as a centrifugal compressor in early jets. One could conceivably put in a fuel combustion chamber in the part labeled "motor" and with vectored thrust we have the "jump jet". +1 for thinking (and the diagrams).

Angle the rotor blades so that they force air upwards, not downwards.

Mount a stationary solid disk halfway between the two rotors.

Possibly enclose the entire contraption in a vertical cylindrical shroud.

Maybe the shroud should have some ports around the circumference to prevent the air from stagnating. Just above and just below the disk would appear to be the optimal location for these ports.

Would such a thing create some lift? Probably-- but in the downward direction.

Could a more optimal device be created from the same raw materials? Certainly.

The basic point here is that you have to consider the entire system-- you can't just home in on how a pressure difference may be created between two sides of one particular element.

Not the answer you're looking for? Browse other questions tagged aircraft-design aerodynamics aviation-history engine-design or ask your own question.

23
Would an aircraft with contra-rotating propellers longer than the plane's wingspan be able to fly?
13
Why do helicopter rotors have constant section and angle of attack?
1
Would a propeller extracting air from a cylinder with holes in it be an ideal lift apparatus for a VTOL aircraft?
4
Would this be a dangerous impeller to use for a drone?
7
Why do smaller RC helicopters have visible twist in their rotors, and slightly bigger ones do not?
4
Early turbojet RPM and thrust indicator
3
What causes lift?