Where must the glider tow line connection be?

I have styrofoam glider and I want to pull it with a rope, to fly with me when driving a bike. Where do I need to connect the attachment point, if I want the glider to fly stable above me?

I think, to stop roll disturbance I need connect the rope at both wings, but where do I need place them, at the center of gravity (CG), at the center of the overall lift, at 1/4 wing chord (center of wing pressure), or at the aerodynamic center? 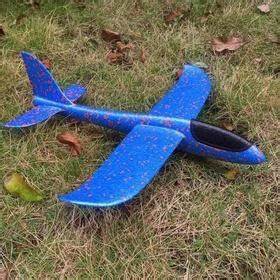 (I also notice that a plane tow real glider connects at the nose and when the winch tow connect at fuselage under wing, but what does this place represent in an aerodynamic sense?)

glider model-aircraft towing
Share
Improve this question
edited May 11, 2021 at 9:35

It needs to go just under the tip of the nose to have any chance. This connection is equivalent to the thrust line of an engine, except that because the connection isn't rigid, the longitudinal location matters; the farther forward, the more stable (if the attachment is rigid, like an engine/propeller, it doesn't matter whether the thrusting component is forward or aft, from a stability perspective).

Probably most normal gliders hook up at the nose but a lot of them have hooks near the center of gravity underneath to facilitate winch launching, and when used for aerotow these are less stable and somewhat of a handful to fly for an inexperienced pilot, especially on crosswind takeoffs.

You will have to set the horizontal tail to apply enough trimming force to overpower the nose down component of the pull of the tow line, that is, more nose-up trim than necessary for free flight.

You will find that because the thrust line is more or less concentric with the roll axis, there is not much you can do for roll stability and will be stuck with whatever inherent stability is there from the dihedral effect of the turned up wingtips. Connecting the tow line to each wing tip will not help with roll, since the two lines still run to a single attachment (until you get the angle of the tow line to the longitudinal axis high enough that the "Y" connection is influencing roll, but the thing may still just arc down into the ground anyway), and connecting that far aft will make you completely dependent on the glider's inherent pitch stability and damping.

My prediction is that as is, whether you hook it at the nose or the wing tips, it will go all over the place, than crash, and to get it to just kite along smoothly behind while on tow, you will need a lot of wing dihedral, similar to a 2-control model.

Lots to consider here. "Free-flight" model airplanes and gliders fly without any control inputs from a pilot whatsoever (and no automatic electronic stabilization systems either). One branch of this is called "towline gliders" and the "pilot" runs along pulling on a line attached to the glider to get the glider into the air. The line is attached to a tow hook just forward of the CG of the glider.

If you really want to dive into the subject, you could try to find out just exactly where the tow hook is in relation to the CG for various towline free-flight model gliders.

In full-scale sailplanes, the best location for the tow hook is near the nose for a greater tendency to track straight (and not pitch up) during aerotow, and on the belly near the CG for maximum altitude gain during a winch launch or car tow launch, both of which involve a tow line running to the ground. Some sailplanes have only one tow hook, rather near the CG, though this is not optimum for tracking straight during aerotow. Reasons for omitting the nose hook include-- leaving the nose free for something else like a pitot tube, keeping things simpler if there is already a hook near the CG, and keeping things more streamlined (often the hook near the CG is mounted on the landing gear assembly, and retracts with the wheel.)

It is certainly possible to do an car tow launch with a sailplane using just the hook near the nose, but the pilot typically exerts a lot of aft pressure on the control stick, often sometimes getting the elevator into the full up position to allow the glider to really climb steeply despite the downward pull on the nose. The maximum height gained is always less than on a similar glider with a tow hook near the CG.

It looks like your glider has very modest dihedral (especially in relation to the size of the vertical fin)1 and thus very modest inherent roll stability. It's doubtful that it could be successfully treated like a purpose-designed free-flight towline glider, in terms of tow hook position. If you want it to just follow along behind you as you ride a bike, you need to do everything you can to tip the odds in your favor, as far as preventing the glider from turning away and entering a "lockout" (imagine a kite veering "off course", away from pointing straight into the wind, and diving into the ground with string still tight.) The string should connect rather near the nose-- perhaps 1/3 of the way between the tip of the nose and the CG. Start there, and then start moving it slowly back to see if you can get the glider to progressively climb a bit higher each time, without going out of control.

Re your idea of connecting the line to both wings-- what about a three-point connection that includes a point maybe about one third or one half of the way out along each wing, and also includes a point on the fuselage closer to the nose? With the three lines converging several feet below the glider? It seems that this would "lock" the glider in to a level bank attitude, at least once the glider has gained some altitude, and so long as the glider is staying directly behind the bike. But it seems that nothing would stop the glider from rotating (yawing) around the towline as it veers off course-- like the "lockout" dynamic we see with a kite on a string, as noted above-- unless the net effect of the three lines is to cause the tow force to converge to a point well ahead of the glider's CG. It looks like your best bet is going to be to get the tow force to act rather near the nose, in which case the additional lines to the wing are only going to be a hinderance. You'll likely have better luck trying to just fly it like a glider (i.e. with a single towline), rather than treating it as sort of a hybrid between a glider and a kite.

The Blanik L-13 glider did indeed use a 2-point v-bridle for winch launching and car towing, but the bridle was connected to one point on each side of the fuselage, not on the wings. See page 7 of this manual for a very brief mention-- note the reference to "very light" control forces, which would have been in reference to pitch control. Presumably the reason for this design was to get the points of connection absolutely as close to the CG of the glider as possible in the fore-and-aft sense, for maximum altitude gain during car tow and winch launching. It would not have been possible to put a tow hook on the belly of the glider in the same fore-and-aft location, because it would have been behind the wheel. Most other sailplanes with a tow hook on the belly of the glider near the CG have it positioned just in front of the wheel.

Please let us know via a comment or an addendum to the question, or a self-answer, what you actually find to work best!

Not the answer you're looking for? Browse other questions tagged glider model-aircraft towing or ask your own question.

8
Do glider pilots have to wear parachute in countries where mandatory even if flying with a foreign glider?
14
How should a glider pilot signal turns to the towplane?
1
What is the effect of fuselage weight on a model glider?
3
What produces thrust along the line of flight in a glider?
6
What is the material of this tow bar?
1
Aerodynamics and fuel consumption of a powered glider
7
Is a vertical stabiliser needed for straight line flight in a glider?
2
Which pilot license is required in the US to engage in glider towing?
4
Calculate pitch balance of RC glider?
8
What effect does towing a glider have on the stall speed of the tow plane?