Is lift less in a steeper descent than in a shallower descent, and if so, by how much?

Is lift less in a steeper descent than in a shallower descent, and if so, by how much?

For relatively shallow descent angles (say up to 15 or 20 degrees), does it really make sense to say that if we leave thrust constant, we can increase the descent rate and make the glide path steeper "by reducing lift", meaning the actual lift force as we would measure in Newtons or pounds? Or does the idea of descending by "reducing lift" have some other interpretation that is more accurate or meaningful?

Does the answer depend on whether we are increasing the descent rate and making the glide path steeper by opening spoilers, or by deploying flaps, or by reducing power, or by just putting the nose down and allowing the airspeed to increase, assuming we end up with the same change in glide path in every case?

For example, what really happens, in terms of the lift force, when we open spoilers to "dump lift" and make our descent angle steeper, while holding airspeed constant, without changing thrust? (Assume that the "spoilers" really do decrease the lift coefficient, at the instant that they are deployed.) After we are established on the new flight path, has the lift force really decreased, and if so, by how much? (Specifically, for the change in glide path described above.)

aircraft-physics flight-dynamics
Share
Improve this question
edited May 8 at 13:25
quiet flyer
asked May 7 at 12:19

in an unaccelerated descent - or ascent -, lift - the force acting perpendicular to the direction of motion - scales with the cosine of the angle of flight from horizontal. Hence, an aircraft in a 90 degree dive will have no lift.

This is independent of airspeed or the method by which lift reduction is achieved.

Here's a graph of lift Vs glide ratio 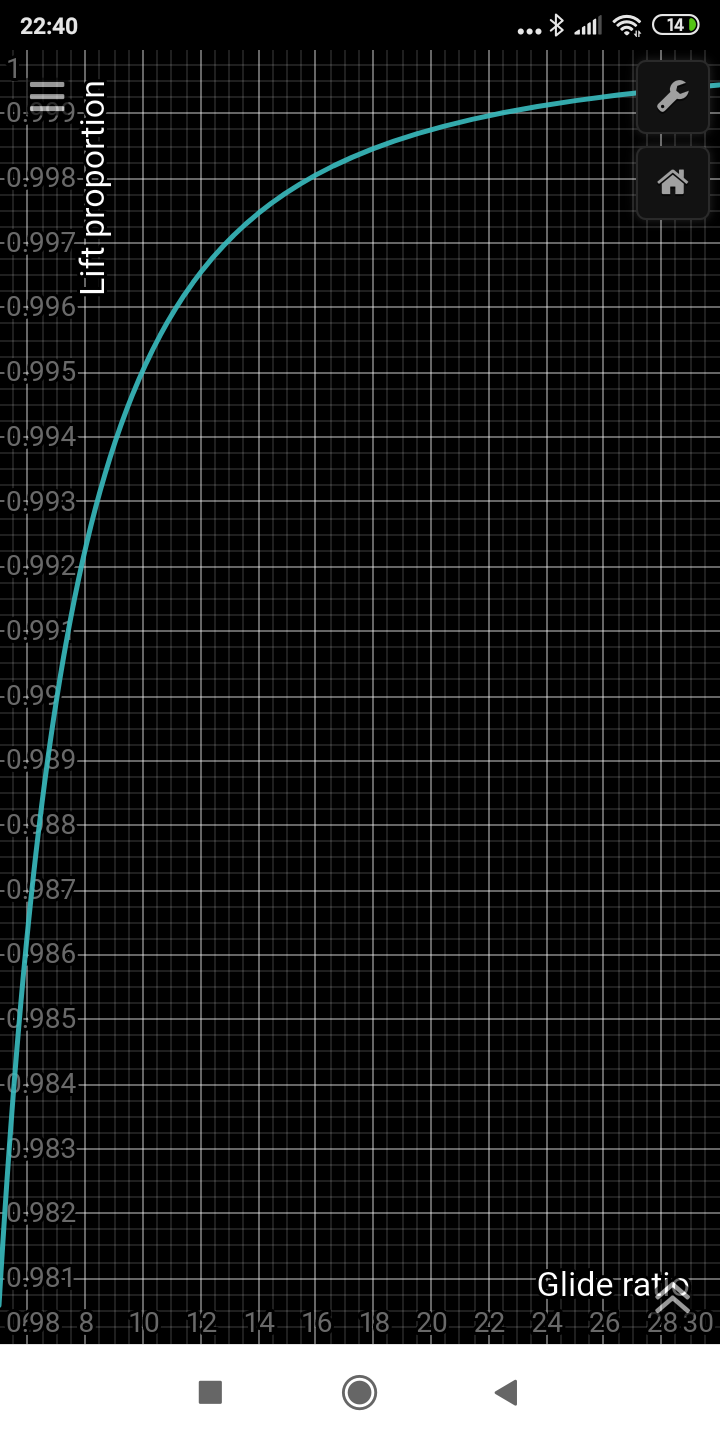 Lift requirement in descent is defined the same way as in a climb:

When you dump spoilers and flaps, this drastically increases the drag, requiring a higher angle of descent to maintain airspeed.

Spoilers decrease lift coefficient and increase drag, allowing for a faster, steeper descent. This very valuable to a glider trying to land under windy conditions.

But the lift requirement for stable, linear flight is determined by weight x cos angle to horizon, no matter what combination of drag, lift coefficient, and airspeed one uses.

Robert DiGiovanniRobert DiGiovanni
11.1k11 gold badge1414 silver badges4949 bronze badges
$\endgroup$
5
Add a comment  |
0
$\begingroup$
Locked. There are disputes about this answer’s content being resolved at this time. It is not currently accepting new interactions.

Other answers have already pointed out that

As long as the descent angle is small, when we say we increase the descent angle and sink rate "by reducing lift" -- e.g. by opening spoilers-- it is technically true that the lift force is slightly reduced, but if we are envisioning a significant effect, what we really mean must be something else entirely.

However, we have to be careful about how we apply this idea as well, for at least a couple of reasons. One, because it gives no insight into how we can descend by deploying flaps, or by reducing thrust. And two, because it gives no insight into any case where we are holding the airspeed constant. Whenever the airspeed is constant, the lift coefficient and the lift force are directly related, so the lift coefficient must be directly related to weight * cosine (descent angle). For shallow descent angles, we've already noted that the value of this expression only decreases slightly even when we make a large increase in the descent angle and sink rate.

So what is really going on when we increase our descent angle and sink rate by deploying spoilers, or deploying flaps, or reducing power, while holding airspeed constant?

If we deploy the flaps, this will have the initial effect of increasing the lift coefficient as well as the drag coefficient. If we don't want to lose airspeed, we'll need to decrease the angle-of-attack of the wing to return to (very nearly) the original lift coefficient. Decreasing the angle-of-attack in this manner slightly reduces the net increase in drag coefficient that would otherwise be created by deploying the flaps, but the drag coefficient is still higher than it was before we deployed the flaps. Unless the airspeed is quite low, we have more drag force and a higher descent angle and a higher sink rate when the flaps are down than when they are up. The higher the airspeed, the more pronounced this effect. When the flaps are deployed to a very large deflection, such as 45 degrees or more, lowering the nose to increase the airspeed can be a very effective way to create a very large increase in the descent angle. Another way to say this is to note that deploying the flaps creates a very large downward shift (toward a higher sink rate) in the far right-hand portion of the "polar curve" of airspeed versus vertical speed.

If we increase the descent angle by opening the spoilers, this will have the initial effect of reducing the lift coefficient as well as increasing the drag coefficient. If we don't want to gain airspeed, we'll need to increase the angle-of-attack of the wing to return to (very nearly) the original lift coefficient. The increase in angle-of-attack also further increases the drag coefficient. The net result on the sink rate and descent angle is somewhat similar to if we had deployed the flaps, except that there is no decrease in stall speed. Rather, the stall speed is raised.

(Note that increases or decreases in angle-of-attack (as measured at the fuselage or the unflapped part of the wing) do not directly correspond to identical increases or decreases in pitch attitude, especially if we're simultaneously making a change in configuration, which also affects the flight path. Note also that for simplicity this answer assumes wing area is constant-- the increased wing area due to deploying Fowler flaps, for example, is just treated as an increase in the lift and drag coefficients. Note also that throughout this answer, for simplicity we treat the thrust vector as acting parallel to the flight path through the airmass.)

Note that if we are operating on the "front side" of the thrust-required curve (i.e. not at extremely low airspeeds), simply moving the control stick forward is another way to add drag, even though the drag coefficient is actually reduced by the decrease in angle-of-attack. What we're really doing here is reducing both the lift and drag coefficients, which leads to a higher airspeed, which (for small descent angles) restores the lift force to (very nearly) its original value, but at cost of a net increase in drag. So the descent angle and sink rate are both increased.

Descending on a given glide slope (e.g. ILS) at a given airspeed-- is the size of the lift vector different in headwind versus tailwind?

(this answer contains vector diagrams relevant to the present answer, and also includes (near the end) a discussion of effects arising from the thrust line not being parallel to the flight path)

'Gravitational' power vs. engine power -- the variation in the size of the Lift vector as the flight path changes from horizontal to descending comes into play here, exactly as it does in the present answer

Not the answer you're looking for? Browse other questions tagged aircraft-physics flight-dynamics or ask your own question.

22
Does lift equal weight in a climb?
7
'Gravitational' power vs. engine power
3
Is lift force less than weight during a descent?
4
Descending on a given glide slope (e.g. ILS) at a given airspeed— is the size of the lift vector different in headwind versus tailwind?

7
Why is Reverse thrust more effective at higher airspeeds?
1
Is it possible to make an analogy between a lever and an airplane wing in terms of force applied over distance?
1
How much force is produced by control surfaces?
5
How changes in Air masses, Air flow direction and intensity affect lift?
3
What is physics explanation for minimum sink rate airspeed?
0
When do the lift and drag vectors contribute a force component along a glider's path of travel as seen from the ground?
1
In a full-rudder sideslip in a Schweizer 2-22 or 2-33 glider, is the descent rate higher at 50 mph airspeed than at 60 mph airspeed?
0
How does the aircraft keeps propelling forward when airflow and thrust are not aligned?