Can gliders and single-engine planes have vortices?

A third physical explanation of the source of induced drag is that the wing tip vortices contain a certain amount of rotational kinetic energy. This energy has to come from somewhere; indeed, it is supplied by the aircraft propulsion system, where extra power has to be added to overcome the extra increment in drag due to induced drag.

Could you see the vortices created by the glide of owl in the video here and here?

Also, if the phenomena of vortex is not due to engines than why there are four vortices in this famous image: 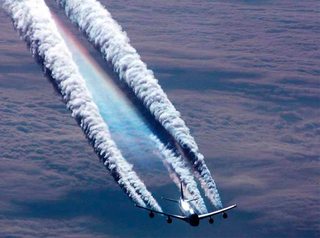 The jet in your photo is showing "vapor trails" or "contrails" from condensation (from the engines' exhaust) and are not wing-tip vortices.

I'm pretty certain there are a number of engineers on ASE that could provide a more technical answer, but the bottom line is the engines of an airplane do not create vortices (in the context of wing-tip vortices that I believe you are thinking of).

The meaning of the quote is not that the propulsion system directly creates a vortex, but rather that it takes energy to create the wingtip vortices, which (at least in the case of a powered aircraft in horizontal flight) creates a demand for extra power and thrust. The extra thrust required to create the vortices is exactly equal to the "induced drag", which is the drag associated with creating the vortices, or perhaps more correctly stated, the drag associated with creating the whole downwash system (which includes the wingtip vortices) behind the aircraft.

If something is not entirely technically accurate in my explanation above, I hope another answer will correct it, but that's the general idea that the quote was trying to convey.

The photo you included shows how the contrails behind the engines can help make the wingtip vortices more visible. The air behind the engines eventually gets entrained in the wingtip vortices. But you could create a similar picture just by mounting four smoke canisters under the wing of a single-engine airplane, or a glider. The airliner's engines are not actually creating the two main vortices that we see far behind the aircraft. Rather, the flow field around the entire wing is.

Hopefully this answer has made it clear that single-engine planes will have wingtip vortices, just as airliners do.

Gliders have wingtip vortices too. As for where the energy comes to create them, with no motor -- this answer may shed some light on that-- An airplane has an engine that pushes its flight. What force pushes a glider to fly?

In the case of birds, the story is different-- each wingbeat significantly affects the flow field around the entire wing, so there's a closer link between the system of propulsion, and the vortices left behind.

The question has been edited to suggest that the passage I've quoted is actually the question-asker's interpretation of a passage from a textbook. I'll just let my answer stand as is; I think it is still of some value to the asker of the question.

The aerodynamics can be explained, something I cannot do for that quote. Let's address the quote story first and, once that's out of the way, let's have a look at the aerodynamics.

Thrust is not an "additional requirement". It's just that in stationary, horizontal, and level flight, thrust and drag are at equilibrium. But that's total drag, the induced drag is just a part of that.

Induced drag (slightly oversimplified) is just the tip circulation of the wing. Basically, under the wing the aircraft needs higher pressure than above, that's what is creating the lift. But as a parasitic effect, that means that during flight, there is also some air flowing around the wing tip - basically pushed from the high pressure domain below the wing to the low pressure domain above the wing. So around the wing tip, strong vortices are induced. Now, for each meter that the aircraft flies, one meter of vortex is added on either side. These vortices contain kinetic energy, and for lack of another source, it had to be provided by the aircraft. Finally, if you consider that it is "energy spent per distance", and the very definition of energy is force*distance, you can divide that energy by the distance and retrieve a force - the induced drag. That's the case for any wing, glider or jet fighter, propulsion doesn't change that. The point about gliders is only that they provide that energy by losing altitude.

Then there's a bit more theory on that, if you're interested

and also, the vortices aren't necessarily only two simple vortices on either side, rather they are a spacial distribution, described as a vortex field. But that's just to add more precision, not to change the picture.

The Movies They're all very great, btw

As for what you see on the 747 - it's not 4 vortices, it's four vapor trails, that roll neatly up into the vortices.

Not the answer you're looking for? Browse other questions tagged aerodynamics glider single-engine vortex or ask your own question.

5
An airplane has an engine that pushes its flight. What force pushes a glider to fly?
7
How is drag created from wingtip vortices?

10
Can single engine planes glide from a falling position?
15
What are the pros and cons of single-engine vs. twin-engine?
12
Can these vortices be dangerous?
28
Is it safe and effective to have "glider pilot mentality" when landing single-engine fixed-wing aircraft?
4
Where can I find pictures of "endplate"?
3
How and why do wake vortices come together to form two tip vortices?
10
Are there any data on the safety rate of gliders vs single-engine GA aircraft?
1
Does distributed propulsion create unwanted lift at cruise speeds, requiring a negative angle of attack?