Did John Stringfellow ever build an aeroplane, powered by a steam engine, that really flew?

After doing some research, I found two apparently conflicting articles. The first, dated Sep. 23, 1848, describes John Stringfellow as marching through the air in a tent. The second, published about 20 years later (July 10, 1868) quotes Stringfellow as declaring that the world still waited to see him flying.

Question: Did John Stringfellow ever build an aeroplane, powered by a steam engine, that really flew? Does it exist written contemporary evidence (letters, articles, patents, etc.) proving that this inventor designed, built and flew a plane of any kind (manned or just a model)?

A series of experiments have lately been made beneath an immense tent in Cremorne Gardens, London, by a Mr. Stringfellow — a fine name for suspension. The inventor marches through the air by a machine which sustains and propels itself through the cicumambient fluid. The machine excited considerable attention and surprised all the spectators by its wonderful performance. The next expedition that is fitted out by the British government to explore the Niger and the country through which it winds its sluggish and pestilential way, should employ this Mr. Stringfellow with a number of his machines to make a flying exploration, untramelled with their heels in mud or water.

Mr. Stringfellow, one of the exhibitors at the Crystal Palace, enthusiastically declared that the world should yet see that he could fly with his own machine, and this opinion seemed to be universally held. ...

I was not able to discover articles of 1848, or even up to 5 years after, that give details about the 1848 flight of Stringfellow's model. However, I found 3 first hand articles, published on July 3, 24 and Oct. 9, 1868, which say that, at an exhibition which took place starting with June 25, 1868, at the Crystal Palace in London, John Stringfellow exhibited two engines. For the larger one, that generated, when started, a little more than 1 HP, he took a prize of 100 pounds. The smaller motor was installed on a working plane which apparently flew but the description is vague being unclear whether the author talks about an event that happened in 1868 or he refers to previous flights, like the one of 1848. Anyway, the conclusion was that despite taking the prize (for the larger standalone engine) it was not clear whether that motor would serve for any practical purposes in aeronautics.

From the numerical values furnished by the commission that awarded the prize, it results that Stringfellow's motor needed:

Nothing is said about the interval of time during which the boiler was able to maintain this considerable flow of steam. Another remark would be that the steam was expelled from the cylinder at 5.4 atm which means the engine had a very poor efficiency.

THE AERONAUTICAL SOCIETY OF GREAT BRITAIN. ...

We have said that there are a few exhibits which are a step in advance of the rest at the Crystal Palace. Amongst the rest may be noticed a working model of an aerial steam carriage, by Mr. J. Stringfellow, the whole, including engine, boiler, water and fuel, weighing about 12 lb.; cylinder, 1 3-16ths inch diameter; 2-inch stroke; works two propellers, 21 in. diameter, about 600 revolutions per minute; gets up steam of 100 lb. pressure in five minutes. ...

THOSE who predicted that the exhibition of the Aeronautical Society at the Crystal Palace would prove a failure may, in part be said to have been true prophets; but the exhibition was not all a failure — far from it: enough, we think, was given in evidence to cause at least one section of the members to be of good heart. True, the expected demonstration of the possibility of flying was not made, and the rewards offered for flying have not been gained. The flying man put in no appearance with bis wings, and the only model of this class which actually worked was the ingenious steam-propelled machine of Mr. Stringfellow, which, running along a a wire, has enabled our facetious contemporary, "Punch," to change the inventor's name to Wirefellow, and which elicited the remark from sundry spectators of a certain class that "he was wiring into it."

IT will be fresh in the memory of our readers that the Aeronautical Society of Great Britain held their first exhibition at the Crystal Palace on the 25th of June last and ten following days. ...

The only engines, therefore, which competed for the prize were three, — one by M. Camille Vert and two by Mr. J. Stringfellow. M. Vert's engine was a small model of a steam engine, weighing 2 lb., for propelling a hydrogen gas balloon. Mr. Stringfellow's engine No. 1 was a light engine and boiler for aerial purposes; it was of 1-horse power, and weighed 13 lb. No. 2 was a similar engine on a smaller scale. M. Vert's engine was found to be too small to enable any accurate test to be applied for ascertaining its power. The jurors state that it appeared to keep up steam well in the repeated demonstrations in propelling a model balloon in various directions within the Crystal Palace building.

Mr. Stringfellow's engine No. 1, from its size and power, may be considered something more than a mere model. The cylinder was 2 in. in diameter, stroke 3 in., and it worked with a boiler pressure of 100 lb. per square inch, the engine making 300 revolutions per minute. The time of getting up steam was noted; in three minutes after lighting the fire, the pressure was 30 lb., in five minutes 50 lb., and in seven minutes there was the full working pressure of 100 lb. When started, the engine had a fair amount of duty to perform in driving two four-bladed screw-propellers, 3 ft. in diameter, at 300 revolutions per minute.

In the jurors' report, the data for estimating the power are taken as follows: — Area of piston, 3 in., pressure in cylinder 80 lb. per square inch, length of stroke 3 in., velocity of piston 150 ft. per minute, 3 x 80 x 150 = 36,000 foot pounds; this makes rather more than 1-horse power (which is reckoned as 33,000 foot pounds). The weight of the engine and boiler was only 13 lb., and is probably the lightest steam engine that has ever been constructed. The engine, boiler, car, and propellers together, were afterwards weighed, but without water and fuel, and were found to be 16 lb. The council of the Aeronautical Society agreed that this engine, as a complete working machine, met the condition of the Society's award for "the lightest engine in proportion to its power from whatever source the power may be derived." The prize of £100 was accordingly allotted to Mr. Stringfellow. ...

The exhibition, however, proved that the advocates for aerial locomotion by mechanical means have greatly increased in number, and their designs for accomplishing this end were as varied as they were ingenious. But still we have no practical result by which we can measure the progress of aeronautics in this direction; we cannot say we have even attained the first step in actual practice. The nearest approach that was made to this long-desired condition of things was the demonstration that by means of vertical screws a weight of 100 lb. might be supported by a constant force of about 90,000 foot-pounds or three-horse power. Then we have Mr. Stringfellow's engine of one-horse power and weighing only 13 lb., which, taken in conjunction with the vertical screws, would appear to indicate the direction in which mechanical flight may be realized; and this is as far as we have got — just on the borders of possibility. But we must bear in mind the enormous expenditure of power the system of vertical screws requires, and the very flimsy character of an engine and boiler sufficiently powerful to work them, and sufficiently light to allow of their working result, if, and when attained, being made available for transit.

It practically comes to this, that Mr. Stringfellow carried off the £100 prize for the lightest engine in proportion to its power, but of what real service that engine will prove to the science of aeronautics remains still to be seen. 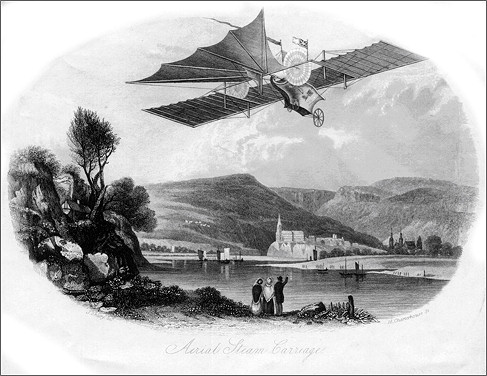 To understand what is going on here you need to know that John Stringfellow together with William Henson wanted to build a passenger airplane and place it into commercial service. They had drawn up plans and patented it in 1842. They tried to recruit investors. The idea of the Aerial Steam Carriage and the publicity campaign depicting the airplane in faraway places attracted considerable attention and of course mockery.

The 1848 article is describing a model airplane built as a test for the project. The tone is mocking from start to finish. They start by mocking his surname "a fine name for suspension". (Stringfellow. String. Get it?)

The part about how Stringfellow "marches through the air by a machine which sustains and propels itself through the ci[r]cumambient fluid" is deliberately over-the-top. The phrase "by a machine" suggests that the author knows it was only a model. Stringfellow is not "in a machine". He is "marching through" (conquering) the air (grandly called "the ci[r]cumambient fluid") by means of a machine which he has sent up as his proxy.

The part about exploring the Niger Valley is a riff off the publicity campaign. It does not mean that the author thinks Stringfellow has build a working airplane. Again, the purple prose suggests the author is not being serious at all.

The 1868 article is describing one of two engines which Stringfellow brought to the exhibition. The smaller was mounted on a tri-plane model. The engine described in the article you quote is one Stringfellow removed from one of his old models. Its power output was estimated at 1.1 hp. The engine together weighted 13 lbs without fuel or water. Stringfellow received a well-deserved prize for the technical achievement of building an engine with such a high power to mass ratio.

Stringfellow never built a manned machine, or even a successful model.

The Scientific American piece mistakes a model with wingspan 10 feet for a manned machine. In 1848 Stringfellow launched it from an overhead wire into a 30 yard powered glide. In his Early Flying Machines, historian Charles Gibbs-Smith notes that it "almost flew". The London Science Museum has a photo of it sat on a chair, and "Relics of Stringfellow's model of 1848: 2 wings; 1 tail; 1 hull; 1 propellor and 1 starting rail".

His 1868 exhibit at the Crystal Palace was a large steam-powered triplane model and a failure. His son F.J. Stringfellow would have no more success with a similarly powered biplane model.

1
Did Boeing or Lockheed ever seriously consider releasing a widebody airliner powered by low-bypass engines?