Why is lift larger than thrust? [duplicate]

It's been a while since I tried to read a little about flight mechanics and aerodynamics, but I remember one question I had back then:

Is the thrust of a common passenger aircraft (A320, B737) greater than its lift-off weight and thus could it take off vertically?

If my calculations are correct, it could clearly not (a result like what one would expect intuitively)!

Thrust is needed to overcome drag, and a good airplane design can create a lot of lift for little drag. In the case of an A-320, the lift-to-drag ratio is 18 in cruise (a little less during take-off), so to lift those 78 tons needs only 4.33 tons of thrust. All it needs is the right amount of forward speed, and the engines only need to maintain this speed.

To be more precise, in a climb the thrust will actually compensate a little of the weight, in addition to the drag, depending on the climb angle. The thrust needs to grow by weight $\cdot$ sin($\gamma$), where $\gamma$ is the flight path angle. If the A-320 had enough thrust to lift all its weight, it could take off vertically, flying in a nose-up, vertical attitude. Modern fighter aircraft do really have that much thrust installed. 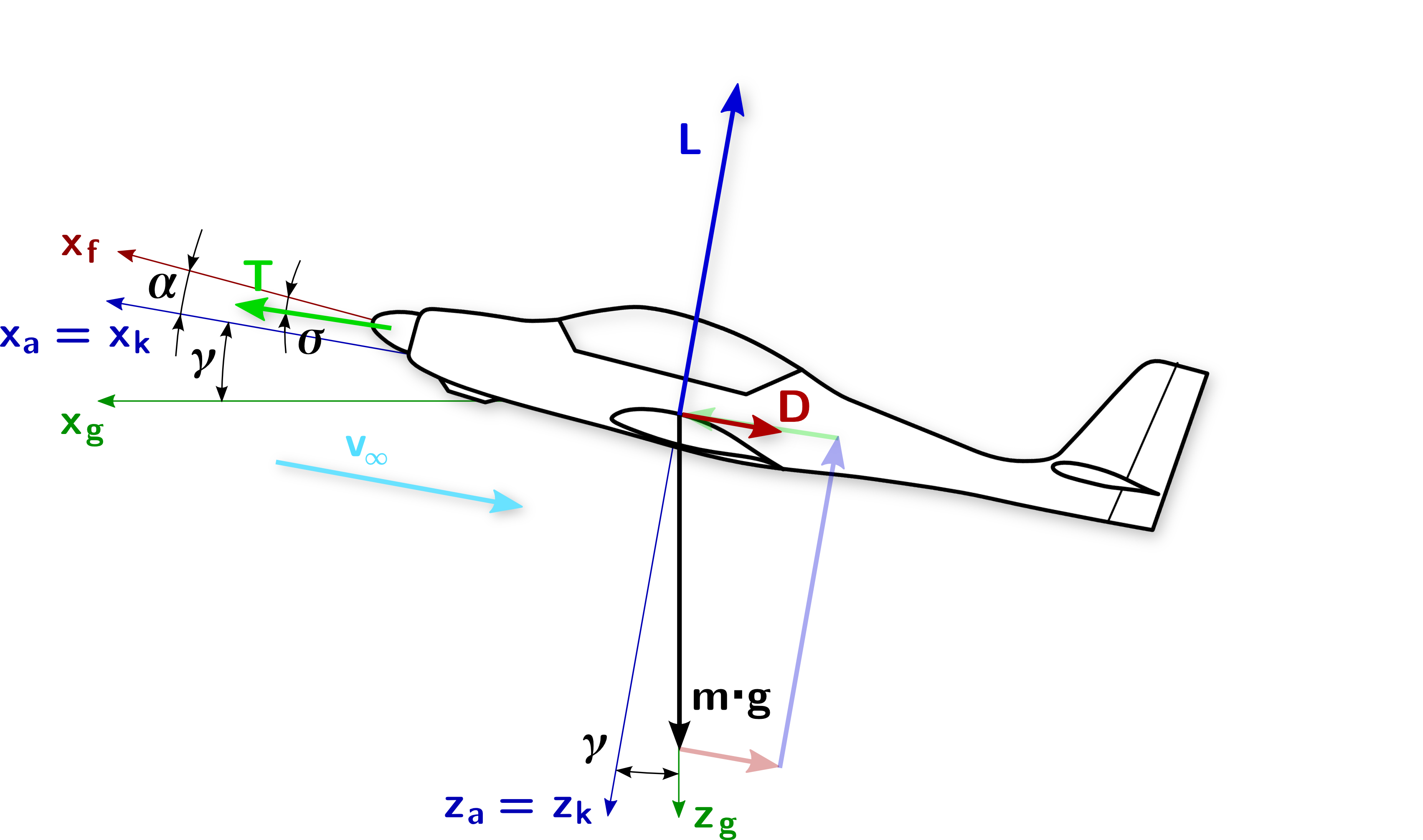 This drawing shows a climbing aircraft. There are four forces at work:

For a trimmed state, the concatenated arrows should form a closed trapezoid (lightly shaded arrows). Note that both thrust and drag are drawn longer here in relation to weight and lift than they are in reality.

To answer the why part needs a few more lines. Lift is created by deflecting the airstream over the wings downwards. This change in momentum is lift, and creating it would be free of drag if the wing's span would be infinite and the air inviscid. In reality, flying causes these drag components:

At the speed of best L/D the sum of 2 and 3 is equal to 1, and 2 and 3 are of the same magnitude for a well-designed airplane. High subsonic and supersonic flight adds a fourth component, called wave drag, and it's onset is the reason why the A-320 prefers to fly not much faster than Mach 0.78.

Peter's answer is very good, but to explain a little more of the 'why,' consider the forces that are at play. In order for a mass to not accelerate in a given direction, the sum of the forces acting on it in that direction must be zero (or the mass infinite, which brings about a whole new set of problems...) In the case of an aircraft that is cruising, there are 3 important categories of forces to consider: gravity, thrust, and the force of the aircraft hitting the air in which it's flying. The latter category is, of course, the most complicated one.

When the wing is moving horizontally, the air produces a force $F$ on the wing, and $F$ has two components, $L$ and $D$. Because the angle of attack of the wing is generally much less than $45$ degrees, $D$ is also much smaller than $L$. Since the thrust of the aircraft is only balanced with $D$. Therefore, with a small thrust, a large force $L $ can be generated, $L$ can be used to balance the weight of the aircraft. 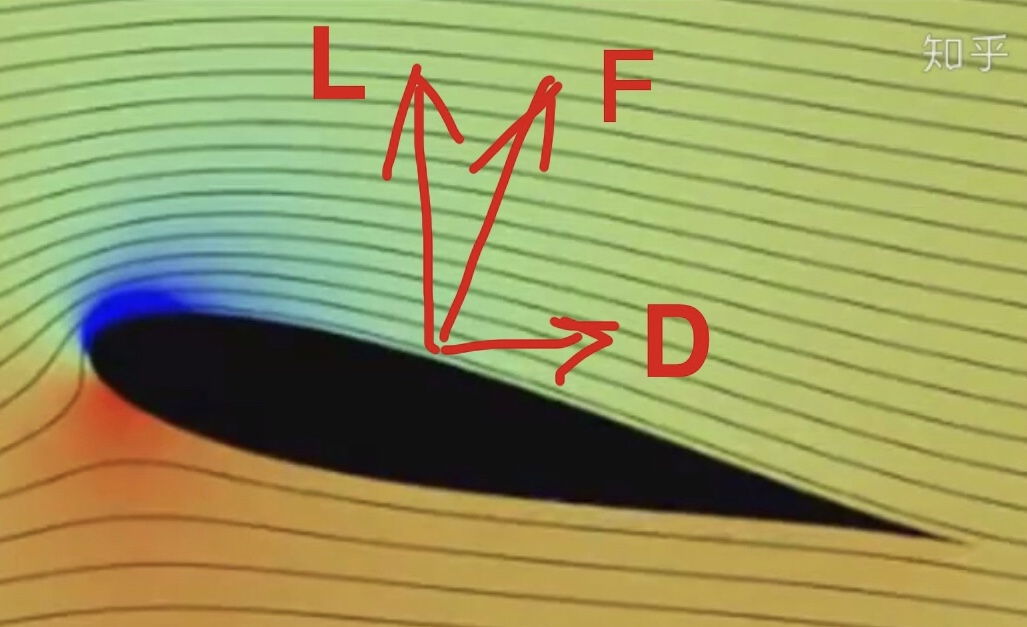 Yes, the lifting areas of the wing (top and bottom) are much greater than the frontal drag area presented in the direction of flight.

Have a look at the lift vs angle of attack graphs posted in the answers to this question.

You will notice the large increase in lift reaching a maximum at around 11 degrees. This lift comes from the top of the wing at very little expense to increased drag as a result of curving airflow and lower pressure above the wing.

At higher angles of attack, greater than stall, lift and drag (drag = thrust for constant speed) dutifully follow their linear relationship: at 45 degrees you do get lift, but with much higher drag.

Another item worth mentioning, in addition to area "gearing ratio" is the effect of the "boundary layer" attached to the aircraft, moving with it. As long as it does not become excessively turbulent, it acts as a "grease", further reducing thrust requirements due to drag.

Lift is greater than thrust because for a plane able to fly it can be demonstrated experimentally (in a wind tunnel) that Lift_constant > Drag_constant.

The formulas for lift and drag are:

If the plane is built in such a way that Lift_constant / Drag_constant > 1 then Lift > Thrust, otherwise it is not.

90
Are wings any more efficient at creating lift, versus orienting the engine's thrust downwards?
6
How can lift be less than thrust that is less than weight?
1
How does 220 kN of engine thrust create the 700 kN required to maintain the altitude of an A320?
0
Can an airplane fly with greater weight than lift and how?
0
Lift and Newton's laws
57
Is a winglet better than an equal span extension?
20
Does lift equal weight in a climb?
5
Can this design provide more lift force than thrust from engine?
4
Is there a simple relationship between angle of attack and lift coefficient?
3
Could future airplanes use rockets to recover plane and/or prevent crash landings?
See more linked questions

28
What is vortex lift?
90
Are wings any more efficient at creating lift, versus orienting the engine's thrust downwards?
14
Why does a stall decrease lift, rather than increasing it?
3
What is the definition of Lift?
3
I calculated that Flyer I and II (1903-04) of the Wright brothers were underpowered. Are there better (drag, lift) coefficients than those of Culick?