What is that wing device that looks like a mini-spoiler on the CJ3?

The Cessna Citation CJ3 (model 525B) has that device circled below, what is it? 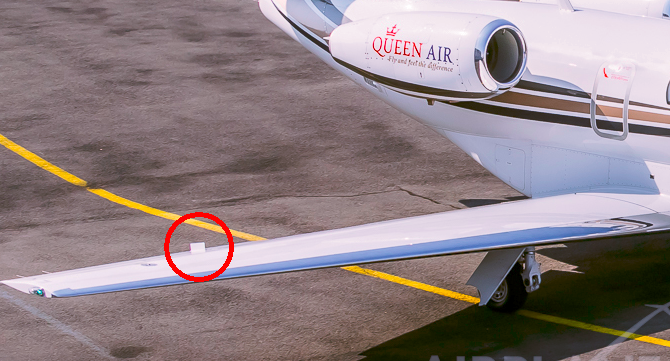 I initially saw it as a mid-chord fixed spoiler-like device. As @programagor commented, it's parallel not perpendicular to the airflow.

I found a hint in a worldofaviation.com article; it's an "aileron fence":

... a small 'aileron fence' rises from the upper surface, just inboard of the ailerons.

Now knowing what to look for and the angles to consider, it's now much easier to spot (and to not spot—knowing that shallower head-on angles would not show it).

Aileron fences Some aileron designs, particularly when fitted on swept wings, include fences like wing fences flush with their inboard plane, in order to suppress some of the spanwise component of the airflow running on the top of the wing, which tends to disrupt the laminar flow above the aileron, when deflected downwards.

But, it's citation needed

As seen below, when downward deflected, the aileron actually takes the fence down with it, so Wikipedia gets it wrong. 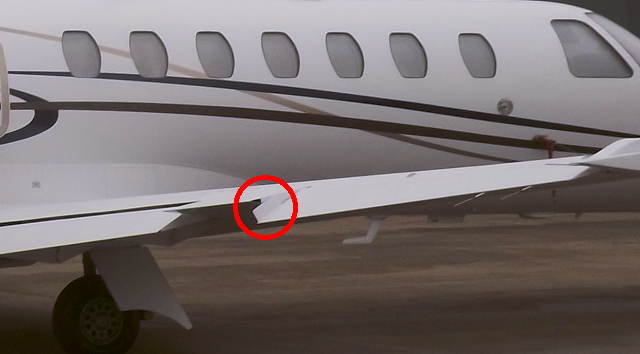 Source: wikimedia.org; this high-res photo shows it attached to the aileron

There's little literature on the device; I was able to find only one source where it's properly explained and makes sense:

In the presence of a sideslip from the wingtip direction of a given aileron, the fence creates a local high-pressure area on the upper surface of the aileron causing it to deflect downward and lifting the opposite aileron. This causes a stabilizing rolling moment away from the sideslip. Fences can also be installed on the lower surface at the outboard edge of the aileron and function in much the same way to create a low-pressure area to “suck” the aileron down. Although aesthetically preferable, these are usually less successful. Some examples of aileron fences used for static lateral stability can be found on a wide range of aircraft: Cessna 206 (single engine piston), Cessna 208 (single engine turboprop), and Cessna Citation CJ3 (twin engine turbojet, Figure A-7).

Another thing Wikipedia gets wrong as shown by that thesis, is that it's present on three Cessna models with straight wings.

Not the answer you're looking for? Browse other questions tagged wing feature-identification cessna-citation or ask your own question.