What kind of tools are available to an ATC handling traffic in the terminal airspace to predict aircraft trajectories?

I know that the ATC has feedback on the current position of the aircraft via Radar and ADS-B data. However, are there any tools to forecast future trajectories. For example, say an aircraft is scheduled to arrive at an airport and will reach within the coverage of the terminal airspace ATC in the next 5-10 minutes. Does any tool help forecast that aircraft's trajectories based on filed flight plans? Does the ATC pay attention to the aircraft only after the pilot has established contact via voice?

Similarly, let's say the ATC assigned some vectors and maybe allocated a runway to an aircraft. Does any tool predict the trajectory the aircraft would follow so that any future vectoring or allocations can be planned?

If such tools are not available, what is the ATC process for handling terminal airspace traffic?

Yes, there are several ways for the controller to predict the trajectory of a flight. The closer the flight gets, the more precise the predictions also get.

In some cases, when the flight takes off, a departure message (DEP) will be sent to everyone who has received the flightplan. The DEP message contains an actual time of departure, which allows you (again based on flightplan data including EET) to calculate a more precise estimated time of entry into your airspace. This is still not very precise, since many different things can happen enroute that means the flight arrives some minutes earlier or later than expected.

Next step is coordination. For IFR flights, every transition from the area of responsibility of one ATC unit to the next requires prior coordination. Controllers often do this manually (via phone), but more and more systems support automatic coordination and exchange of estimates, for example via "On-Line Data Interchange" (OLDI) or other electronic message formats. You will typically receive a coordination for a flight somewhere around 5-10 minutes before it enters your airspace. The coordination will contain a precise estimate of when exactly the flight enters your airspace. The required precision for such an estimate is typically in the range of 3-5 minutes (if a delay occurs after the coordination has happened, exceeding the 3-5 minute tolerance, a new coordination has to be done). This is really the point at which the controller will start "paying attention to the flight" as you say.

Up until now, the flight has still not checked in to your frequency, but that is the next step.

When the flight calls you - assuming a radar based environment - you should be able to identify the flight on the radar. This gives you a precise location for the flight, along with current level, track and ground speed. Knowing these values lets you extrapolate the trajectory of a flight quite accurately. System complexity varies, but common for all radar systems I know is the option to show a "prediction vector". This is a vector (straight line) drawn from the radar track symbol of a flight in the direction of travel for a certain length, commonly based on the ground speed. For example, in a terminal environment, you might have 2-minutes prediction vectors enabled for all tracks, which means that, for all radar tracks, the system will draw a line indicating where the aircraft will travel in the next two minutes (assuming, and this is important, constant heading and ground speed). This is a very intuitive way to visualise for the controller both the current heading of a flight, and its speed, which is useful in many different situations. The controller usually has the option to change the look-ahead time of the prediction vector, either for all tracks or for a single flight, typically in 1-minute intervals. 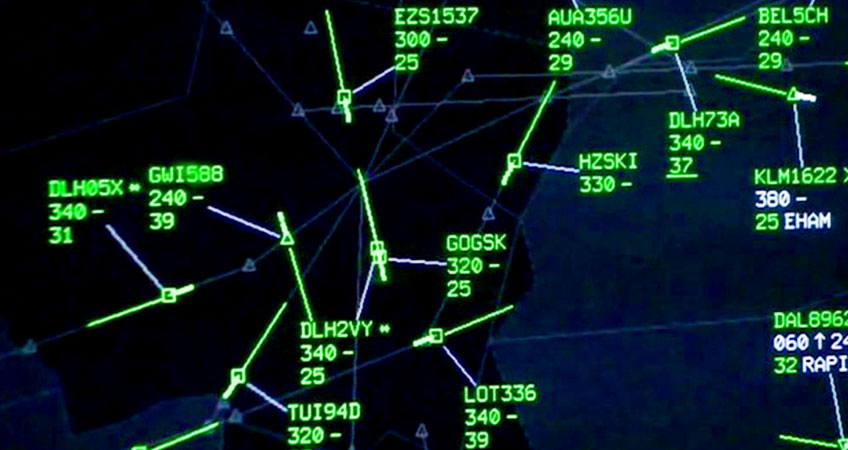 Note that a prediction vector only works based on current heading and ground speed. A change of either of these will change the prediction vector. There are systems that take into account the planned route of a flight when predicting the trajectory, such as Medium Term Conflict Detection (MTCD), but these are mainly used in the enroute (ACC) environment. In the terminal environment, aircraft are climbing and descending, which means they are constantly changing (ground) speed. Also, many aircraft in the terminal environment are under radar vectors, which means they are not following predefined routes, so the system has no way of knowing if and when an aircraft is going to make a turn (since this is decided by the air traffic controller on short notice). These factors make tools such as MTCD pretty much useless in the terminal environment.

There are also trajectory based safety nets, although that's not exactly what you are asking.

Short Term Conflict Alert (STCA) is used to warn the controller of possible impending losses of separation between two radar tracks. You can think of STCA as working similar to a prediction vector, the main difference being that the STCA uses a 3-dimensional vector, since vertical movement is considered as well as horisontal movement. However, just like a prediction vector, STCA only considers what the aircraft is doing right now and extrapolates that into the future. The system does not know if a flight is going to make a turn or level off in 10 seconds. Because of this, the threshold values for triggering an STCA are usually set lower that actual separation minima, to reduce the number of nuisance alerts (e.g. if the required separation is 1000 ft, an STCA might be set to trigger if the predicted separation is less than 800 ft).

There are also tools such as Minimum Safe Altitude Warning (MSAW) and Area Proximity Warning (APW/AIW) which present a warning to the controller if a flight is descending lower than a defined safe altitude or about to enter some sort of restricted airspace. For the most part though, these are based on current position and altitude of a flight, not predicted trajectory.

As for the last part of your question, no, there are no tools that tell the controller how to vector a flight. After all, that is what we are trained for and do very well. With commonly available computing power, there are simply too many variables to consider for a computer to vector and sequence aircraft as efficiently as a human controller. Although, in my opinion, it is probably just a matter of time before supercomputers can more or less take over such tasks.

As early as the mid 1970's broadband radar (older style "raw" radar) was being replaced by computer generated targets (in Air Route Traffic Control Centers -ARTCCs) and data tags and more sophisticated tracked traffic technology was becoming available. Along with this new technology came features that allowed the controller (using a rotatable switch) to see the projected track for the radar target time/miles in the future.

It is an extremely useful tool that is probably far more advanced now than the 1980's when I was last a controller. So, the base technology has been around for many years.

iFACTS is a product that has been in use for almost 10 years in UK ATC. It will predict 18 minutes ahead (in UK airspace as this is the longest time a flight would require to get through the longest sector. This is configurable) for every flight of interest and do conflict detection for all flights of interest (with appropriate filtering rules depending on MOPS). The predictions are based on the physical aircraft performance model, long/short haul characteristics, wind direction and obvioiusly the flight plan including any tactical clearances (e.g. when an aircraft is asked to change altitude due to a change in air traffic during a flight), coordinations (when you enter/leave a sector) and a few other things..

The conflict detection also includes aircraft that haven't yet taken off or have lost radar contact.

iFACTS is unique in the world as a tools support system for air traffic controllers, but is set to be delivered into other countries as part of the Single European Skies initiative.

Edit (I realised I hadn't answered the rest of your question) Terminal control and national ATC are different. Controlled airspace is considered to be everything above 4000ft. Each terminal at the moment (although this will change) has their own air traffic controllers who communicate to the aircraft to bring them in/out along with ground movements and all those comms also go to national ATC. Terminal control doesn't have iFACTS (this will change) due to the software changes required.

Not the answer you're looking for? Browse other questions tagged air-traffic-control tracon or ask your own question.

6
What kind of information is shown on airport surface traffic surveillance displays?
6
What does the ATC instruction “Make left traffic, runway 19L” mean?
14
What are effective ways to spot the aircraft ATC specified?
1
Are any online resources available for ATC recordings?
7
How are spacecraft and aircraft traffic coordinated?
1
Can ATC separate IFR traffic in class A airspace from VFR traffic in class E?
8
Are there any publically available recordings of conversations between ATC and pilots?
4
What benefits does Automatic Dependent Surveillance bring to continental ATC over Mode S?
7
How would an aircraft fly PIKES ONE departure procedure of Denver Airport?