Why Lift-induced Thrust Required(Tr) decreases and Zero-Lift Tr increases with the increase of velocity? [duplicate]

Ask Question
Asked 9 months ago
Active 9 months ago
Viewed 105 times
0
$\begingroup$
This question already has an answer here:
What is the formula for induced drag? (1 answer)
Closed 9 months ago. 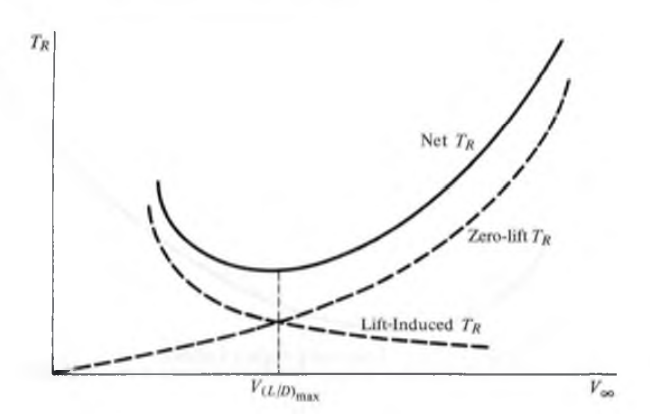 As the minimum Tr is at the point where L/D (lift/drag) ratio is the most. And Lift-induced Tr depends on the Coefficient of Lift, (Cl)^2 and Dynamic Pressure (q) which also increases as velocity increases. But why it is decreasing?

And how Zero-Lift Tr depends on velocity and is affected that much when its coefficient is a constant?

This happens because Angle of Attack required to maintain flight at a given weight decreases with the increase of speed.

As for the zero-lift Tr, also known as "parasitic drag", while its coefficient is a constant, its formula is not: it actually has a cube of velocity.

Thanks to @JanHudec for reminding me that the graph is for a level flight.

To keep the flight level at low speeds, the Angle of Attack(AoA) needs to be increased, meaning Cl (coefficient of lift) must be increased and so the lift-induced drag ( proportional to Cl^2) is high at low speeds.

With the increase of speed, AoA decreases to keep the flight level, hence, Cl and so lift-induced drag and its Thrust Required (Tr) decreases.

Coming to Zero-lift Drag or the parasitic drag. At low speeds it is low. But at higher speeds, there is an introduction of wave drags,

"parasitic drag increases because the fluid is striking the object with greater force, and is moving across the object's surfaces at higher speed. As speed continues to increase into the transonic and supersonic regimes, wave drag grows in importance."-Wikipedia.

17
Why would maximum fly-time (endurance) not coincide with max L/D operating point?
12
How (and why) does engine thrust change with airspeed?
4
Why is the thrust/drag increase much lower at a lower FL with weight the only variable?
0
How to calculate the induced drag coefficient?
3
Is (L/D)max achieved at a specific speed or AOA?
4
Why does lift curve slope increase when Fowler Flaps are deployed?
1
Why isn't Vy lower than the speeds for best L/D ratio and best glide ratio in an airplane with a piston engine and a variable-speed prop?
1
Explained intuitively, why does aspect ratio affect induced drag?