What is causing these "corners" on this F-104 V-n diagram? 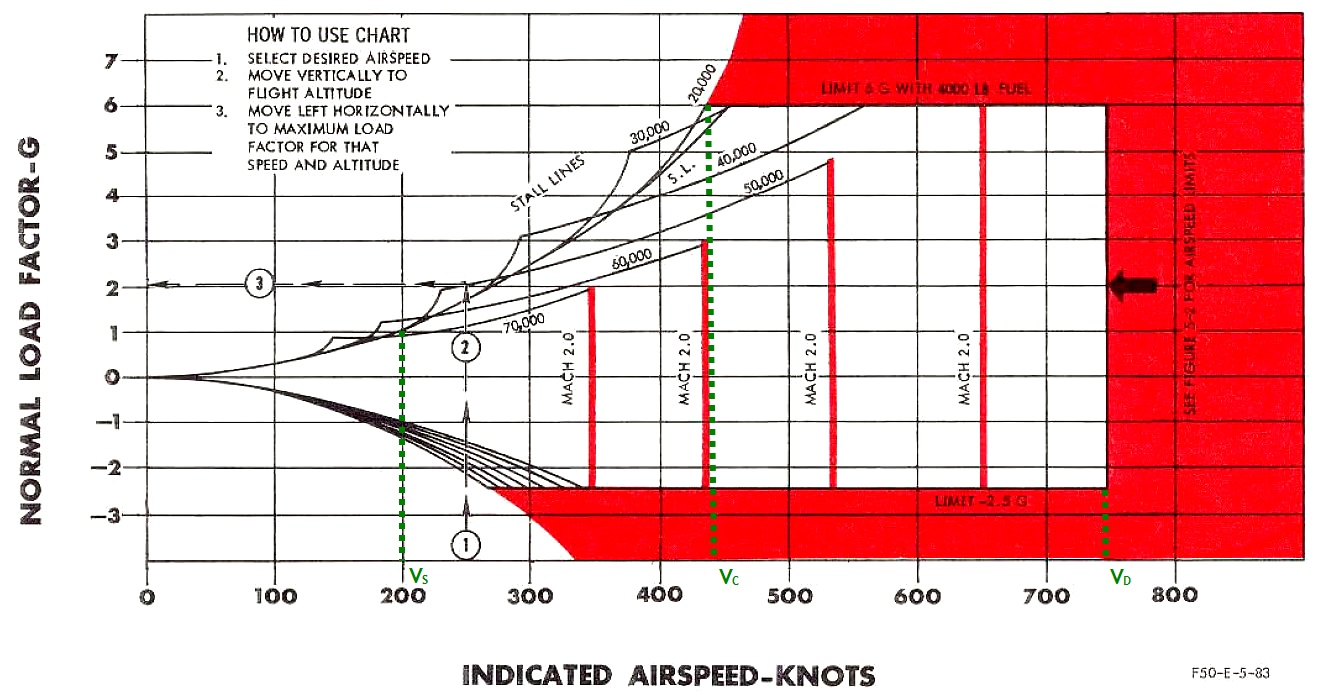 In this V-n diagram for an F-104 (source: this Wikipedia link), on the left-hand edge of the flight envelope, what is causing the "corners" that we see at the following points? (Numbers are approximate)

Do these points simply represent the "corners" of what performance is possible while still maintaining horizontal flight at a constant airspeed (i.e. while maintaining both altitude and airspeed), and if more engine thrust were available, these "corners" would move higher up and to the right, continuing to follow the stall speed curves? I.e., do the actual stall speed curves continue upward from the corners following a path that is more or less continuous with the lines below the corners?

(Note-- re the last data point-- a G-loading of less than 1 is obviously incompatible with constant-altitude flight-- but the data point still could have mathematical or theoretical significance -- e.g., if the aircraft weight decreased by 5%, then the aircraft could maintain constant altitude.)

Wouldn't it be theoretically possible for a pilot to operate well outside the illustrated envelope, say, by pulling 4G at 340 knots IAS at 40,000'? Am I correct to assume that this could be done without stalling the aircraft, but the aircraft would be losing either altitude or airspeed continually? Because it is on the "back side" of the thrust-required curve? Whereas that would not be the case for a point further to the right, on the other side of the illustrated curve?

If the actual stall speed curves do in fact continue more or less smoothly upward from the "corners", this would imply that if, theoretically, we were setting a "maneuvering speed" to protect the aircraft from exceeding 6G's, it would need to be at about 430 knots IAS at 20,000' (the "cornering speed" shown on the diagram), but it would need to drop to about 380 knots IAS at 30,000' -- well outside the envelope of the figure as drawn. Is this in fact the actual situation?

Is this particular diagram really as much about achievable performance as about protecting the aircraft from excess loading, at least in the positive-G part of the flight envelope?

Is it therefore not strictly accurate to call this particular diagram a "V-n diagram"?

(Q): In this F-104 V-n diagram, why does the stall speed (in terms of IAS) decrease with altitude in some parts of the flight envelope?

what is causing the "corners" that we see at the following points?

Compressibility. Close to Mach 1 the lift curve slope increases according to the Prandtl-Glauert rule with the factor $\frac{1}{\sqrt{1-Ma^2}}$. Since the X-axis shows indicated speed, the Mach 1 point moves left with increasing altitude. Technically, those corners should also be added for the negative lift limit.

Do these points simply represent the "corners" of what performance is possible while still maintaining horizontal flight?

No. A v-n-diagram covers the whole load factor range while horizontal, steady flight happens along the line y = 1g (except for turns or inverted flight, of course). Adding more thrust will not change the limits. Maneuvering is only possible/permitted (see below) inside the lines and maneuvering at constant altitude depends on thrust which is not included here. The lines show lift and structural limits; thrust envelopes look different.

Wouldn't it be theoretically possible for a pilot to operate well outside this envelope?

Not really. Momentarily yes, for example the stall lift coefficient moves up with higher pitch rate, but that only works while pitch angle is increasing. Also, at supersonic speed (after all, your example of 340 KIAS @ 40 kft is equivalent to Mach 1.07) the envelope is limited by angle of attack, not lift. Therefore, 4g at Mach 1.07 in 40 kft is outside of the permissible flight envelope but may be reached if the pilot overrides stick shaker and stick pusher (depending on control authority).

So this diagram is really as much about achievable performance as about protecting the aircraft from excess loading?

Yes. The region left of the stall lines is impossible to fly since lift is limited at lower speed. However, the top speed limit might well be exceeded in a dive if the pilot chooses to do so. Equally, the g limit might be exceeded right of the point where the envelope becomes horizontal.

Thank you @JanHudec for pointing out correctly that those areas which can physically be reached by improper flying but might incur damage to the airframe are colored red.

Not the answer you're looking for? Browse other questions tagged aerodynamics aircraft-performance aircraft-physics flight-mechanics flight-envelope or ask your own question.

35
How does stall depend on angle of attack but not speed?
4
In this F-104 V-n diagram, why does the stall speed (in terms of IAS) decrease with altitude in some parts of the flight envelope?

15
What is the optimal bank angle to accomplish a given turn in a glide?
5
How changes in Air masses, Air flow direction and intensity affect lift?
3
What is physics explanation for minimum sink rate airspeed?
1
Why isn't Vy lower than the speeds for best L/D ratio and best glide ratio in an airplane with a piston engine and a variable-speed prop?
2
Why are true and indicated airspeed different?
2
On an energy-maneuverability (E-M) diagram how does the shape of a specific excess power (Ps) curve change as thrust is increased or decreased?
2
How does altitude affect the TAS and thrust of an electric fan powered aircraft?
4
In this F-104 V-n diagram, why does the stall speed (in terms of IAS) decrease with altitude in some parts of the flight envelope?