How do the shockwaves (supersonic and hypersonic) interact with the structure?

My main question is why spaceplanes are conceptualized as pointy and lengthy, dart-like machines. What would happen if they were more like flying wing?

I'm hypothesizing a bit and I am not sure what would happen if a flying wing type of aircraft (most notable example B-2) were to go supersonic or hypersonic. So let's push B-2 to Mach 20. 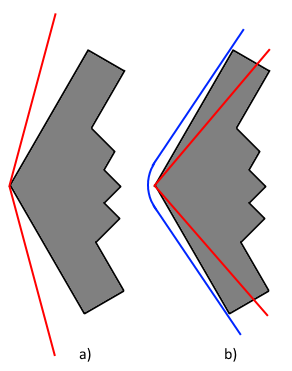 Aircraft with Flying wing configuration, such as the B2 bomber, fly at high subsonic speeds. During such a case, the airflow is at a high subsonic speed at the leading edge, and accerelates through to supersonic speeds as it moves over the front - upper portion of the wing surface. As the wing profile (chord wise) changes to converge towards the trailing edge, the airflow attempts to decelerate from supersonic to subsonic speeds. However, this transition is only possible through a chordwise oblique shock wave. Now, this oblique shocks profile will look like the blue line in your diagram above, but will be sitting at some near-mid chord position.

If the flying wing body is increases speed towards sonic velocity of the air, then this chord wise transition shock wave will become stronger and move just in front of the body leading edge. Finally, once the body is moving at supersonic speeds, the transition shock will become a bow shock in front of the leading edge. In addition to this, there will also be two termination shock waves sitting at the leading edge, one for the upper surface airflow and the other for the lower.

Space flight is all about getting payload up or down with the least possible effort. In that respect, getting in orbit is what demands most of the weight of what goes up. Getting down again costs considerably less, but leaves a choice between propelled or unpropelled reentry, of which the latter is by far the cheapest, but has the disadvantage of committing to hypersonic flight, which for the most part means falling like a meteorite.

Once the choice for hypersonic flight is made, it entirely determines the shape of the spaceplane. If whatever ends up gliding into the atmosphere can safely land, that will do. In all other respects the objective of not burning up on reentry remains of primary importance. Thus the choice of wing shape being optimally adapted to reentry, unavoidably results in shapes like that of the space shuttle.

The B-2 has a shape that serves an entirely different purpose, which can not be obtained anyway, so its pursuit is futile.

Not the answer you're looking for? Browse other questions tagged supersonic hypersonic shock-waves flying-wing or ask your own question.

5
Is hypersonic flight possible with a Busemann's Biplane?
3
What are the effects of shockwaves on normal and supersonic aircraft?
6
Would a rotating skin design mitigate the heating problem limiting hypersonic flight?
2
Are there any special considerations involved in designing manual flight controls for supersonic/hypersonic aircraft?
2
How does the X-59 acheive quiet supersonic flight?
4
How do a narrow airframe and canards keep supersonic shock waves from coalescing?
0
How to identify shock waves and expansion waves on a representation of the mach number?
1
How does wing shape impact shock structure?