Why do the engine nacelles on the P2V Neptune extend so far back?

I was studying a picture of a P2V Neptune seen from below, and what struck me was how far back the engine nacelles reach. Unfortunately, I can't find that original photo but this one shows what I'm talking about: 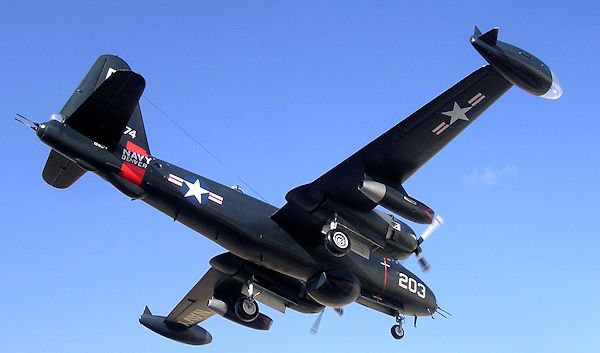 Unlike all the other piston-powered planes I've seen, the engine nacelles actually extend past (what I presume to be) the flap hinge line, ending behind the trailing edge of the wing. There is a noticeable gap in the nacelle to allow the rear part to rotate with the flap. Since the relatively flat radial engines don't even reach back to the leading edge, and the landing gear are situated far forward from the back of the nacelle, I don't see what advantage these elongated nacelles give. I doubt they help reduce drag, as they add surface area and don't end smoothly.

That shape was adapted after wind-tunnel tests showed the original less-tapered nacelle creating downforce, which meant the rest of the wing had to deal with more upward bending (lift distribution more toward the tips). To solve this problem, the beaver-tail-shaped end was used – reducing the flow separation that caused the downforce. The thrust-axis was also tilted 3 degrees down to reduce the overall bending moment (like how the weight of the fuel does that for big jets, here it's a tiny bit of downward thrust).

Nacelle-extension isn't unique to the P2V; you can find it on the B-25 bomber for example, although not as flat.

Wassall, J. B. "The Development of the Lockheed P2Y Neptune: A Paper by a Senior Engineer of the Lockheed Aircraft Corporation Describing the Evolution of a New Aeroplane." Aircraft Engineering and Aerospace Technology (1950). https://doi.org/10.1108/eb031906

I can't speak to the design criteria, as I wasn't there when the airplane was designed, but I do have time in type and experience flying and maintaining the P2V.

There's more going on than just engine, with respect to the nacelle. Remember that the nacelle is partially a fairing for the engine, and serves as the aerodynamic afterbody, but that conical shape also serves to fair additional structure, including the engine mount, oil tank, and in this case, the landing gear. Notice that the structure is greater beneath the wing than above, because the gear resides within. The angle of the nacelle afterbody is more than just the engine nacelle; it's also fairing the gear. If you follow the lines on the lower surface, after the gear doors are shut, you'll follow a consistent arc which actually takes the nacelle aft beyond the straight trailing edge of the flap. The upper surface, coming over the top of the wing, does join the wing at the trailing edge, but continues to mate with the lower lines, which extend further.

The simple answer may be the reason is the landing gear (and associated hydraulics, actuators, etc. There's also more structure and equipment contained within the afterbody and along the rear spar.

That said, as radials go, the R-3350, and the nacelle on the P2V, is quite large, and features integral air intake, rather than an external scoop as some engines have used. It's large enough that it opens in three sections, to work on the engine. It's very well designed, and represented the most advanced that radial technology reached.

The P2V was advanced, for its time, but complicated, hydraulically.

Those two jets on the wings, J-34's, avgas-burning turbojets, tripled fuel consumption when lit off, and of several different door fairings designed, turned out to be somewhat unreliable.

It's one of the few airplanes I've flown that required a crew member in the back to cut safety wire on the hydraulic lines at the varicam (variable camber horizontal stabilizer) and simultaneously swap valves on the main and sub-main hydraulic systems, at the same time the pilot in the cockpit swapped the control at the back of the pedestle in the cockpit. Not a big problem with a crew of 11, but in modern times, with a crew of two, a potentially big, big problem.

Off-topic, I know. The airplane was a workhorse.

Not the answer you're looking for? Browse other questions tagged aircraft-design nacelle lockheed-neptune or ask your own question.

50
Why are the Boeing 737 nacelles odd shaped?
19
Orange object on back of jet-engine pylons, what is it?
15
Do nacelles around aircraft engines help in reducing the engine sound?
6
What is the purpose of the translucent tube and dial on JU 52 engine nacelle?
3
Why are some engine nacelles thicker than others?
6
Does the stream of engine thrust act as a good drag shield against the nacelle?
13
Why do Boeing aircraft have serrated engine nacelles, but Airbus does not?
15
Why does the B-52 outboard engine nacelle have a sharp change in shape?
3
Why are the boundary layer suction holes placed far forward from the engine?