What kind of problems can a flight have if passenger weight is miscalculated?

There was a widely reported news story about a TUI Boeing 737 flight, where a bug in reservations system caused 38 passenger on the flight to be allocated a 38kg standard weight as opposed to the correct figure of 69kg. In total, this caused the report to state that the weight of passengers was 1200kg lighter than it actually was.

My question is - how serious of a problem is that? Would the pilot notice this discrepancies? What kind of problems could appear due to pilots using the wrong passenger weight in calculations and flight configuration?

In general, an incorrect takeoff weight can have serious consequences for an airliner, especially when the actual TOW is close to the RTOW (regulated takeoff weight, see e.g. this question: What is RTOW and how is it different from MTOW?). It is possible that the aircraft is unable to takeoff within the available runway length. This is particularly important in case of an engine failure during the takeoff, since normal performance with both engines operating typically has enough margins. Even on a long runway, the pilots might rotate too early because of an incorrect rotation speed (VR), which could result in a tail strike.

In this particular case, the difference in performance was minimal. The AAIB (Air Accidents Investigation Branch of the UK) investigated the incident and concluded:

Whilst an incorrect takeoff weight was used for aircraft performance planning, the thrust required for the actual TOW and environmental conditions (88.2% N1 ) was marginally less than the thrust used for the takeoff (88.3% N1 ). This meant the safe operation of the aircraft was not compromised.

The report also shows the difference in the performance calculations with the incorrect (left) and correct (right) TOW: 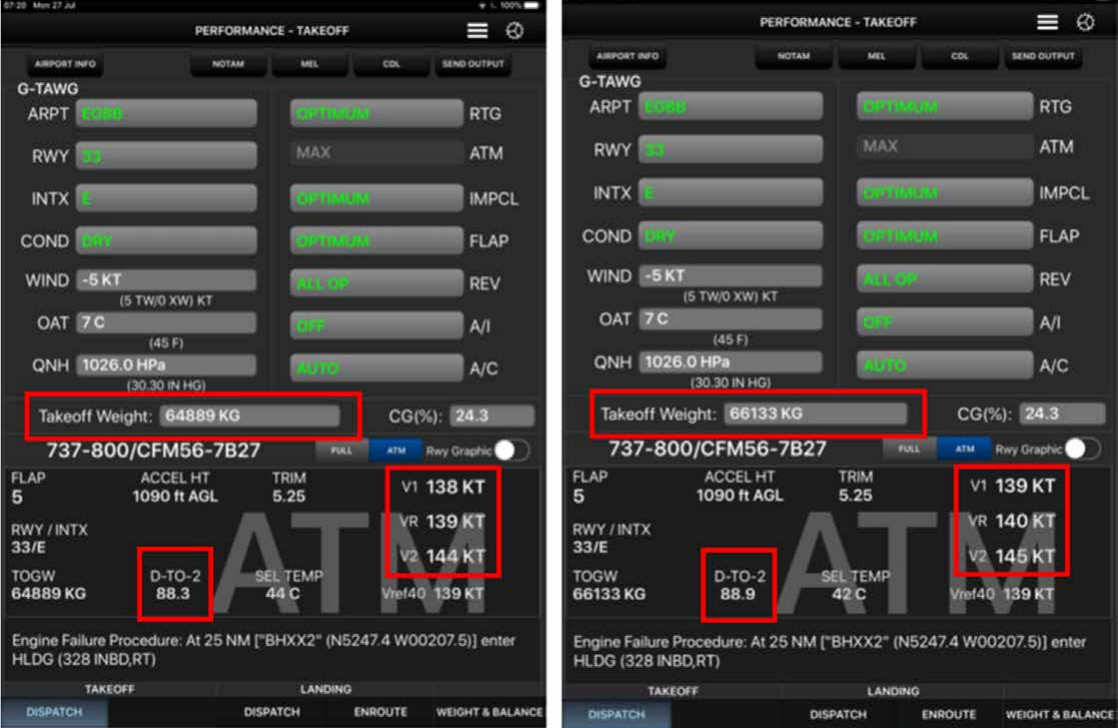 The difference in the V speeds for takeoff is just one knot, which is not significant enough to have any adverse impact on the takeoff.

The investigators determined the crash to have been the result of the combination of two separate issues.

[First,] investigation revealed that turnbuckles controlling tension on the cables to the elevators had been set incorrectly, resulting in insufficient elevator travel, leading to the pilots not having sufficient pitch control.

Although the pilots had totaled up the take-off weight of the aircraft before the flight and determined it to be within limits, the plane was actually overloaded and out of balance due to the use of incorrect Federal Aviation Administration (FAA)-approved passenger weight estimates. When checked, the National Transportation Safety Board found that the actual weight of an average passenger was more than 20 pounds (9 kg) greater than estimated. After checking the actual weight of baggage retrieved from the crash site and passengers (based on information from next-of-kin and the medical examiner), it was found that the aircraft was actually 580 pounds (264 kg) above its maximum allowable take-off weight with its center of gravity 5% to the rear of the allowable limit.

It was determined that neither problem alone would have caused the loss of control, which explains why it had previously been flown without incident and had safely departed Huntington, West Virginia.

This said, note that the plane in this incident was a 19-passenger Beechcraft 1900D instead of the Boeing 737 in the recent incident. Smaller planes are much more sensitive to weight distribution issues.

The crew would not notice a 1200 kg overload on an airplane the size of a 737. The weight error will likely be randomly distributed with little C of G impact, and for an overload to be noticeable, there would have to be a significant change in performance at rotation that surprises the crew. This will show up as an unexpected lag in lift off following rotation, and you won't get a noticeable lag with a load that only adds one knot to V speeds.

Depending on the humidity they have to deal with and whether or not there are dehumidification systems (called zonal dryer systems) to keep the air at the outer skin dry, these airplanes often unknowingly fly around with 100s of pounds of water ballast from condensation that has soaked into the insulation, that generally goes un-noticed (no detectable performance hit) until the airplane goes in for C check where the interior panels come out.

Takeoff performance calculations include not only weight, but balance. Part of the output from takeoff calculations include airspeeds (which are based on weight, temperature, runway conditions, runway selection, runway length, wind, and other factors such as reduced power selection, flap use, etc. Takeoff calculations also include the pitch trim setting to be used, and this is impacted by factors such as the flap setting and primarily the aircraft balance. Takeoff pitch trim is a value which will change in flight, but is an initial setting affecting controllability and the control forces needed to pitch to and maintain a takeoff attitude.

An excessive aft center of gravity with the wrong pitch trim setting might make it easier to over-rotate, causing a tail strike, or a forward center of gravity, to under rotate, prolonging the takeoff roll.

Airspeed calculations are more than just reaching a minimum speed, but take into account minimum controllable speeds on the ground and in flight, minimum speed to fly, maximum speed to reject the takeoff and be able to stop the aircraft, and the takeoff safety speed for all engine climb, and for loss of an engine after takeoff. If the speeds have been calculated based on incorrect values, then also affected are the flap setting, which may be wrong for the weight or runway or conditions.

Incorrect balance is more noticeable than incorrect weight, up to a point.

1200 kg may not be an excessive value if well under maximum weight for the conditions, and ample runway exists and if the temperature isn't excessive, and surface conditions (such as icing) don't further restrict weight for a rejected takeoff, etc. It may be a significant issue depending on where that weight causes the center of gravity to fall, especially if the aircraft was already near one end of the operating envelope.

Before take-off, pilots enter a number of figures into the flight computers. Among them, they enter:

No sense using full thrust on a lightly loaded plane (which would get you a very short take-off) when you could reduce thrust a bit even if that means using a longer part of the runway.

As has been shown in the case of Emirates Flight 407, a single error can then lead to nearly-catastrophic consequences. Incorrect data were entered in the Electronic Flight Bag*, and the takeoff parameters were then entered into the flight computer. As the plane was a lot heavier than the figure entered, the thrust wasn't enough to get the aircraft off the ground before the end of the runway (actually 148 m beyond that!), and hit quite a few things while very slowly gaining altitude after that.

* In this case it was the "Airbus Less Paper Cockpit (LPC) system. The LPC system replaced the majority of the aircraft's operating documentation with a laptop computer-based system." (preliminary investigation PDF)

The error in the case of the TUI flight was 1200 kg (1.2 tonnes). As explained in the report, this resulted in a very minor difference in all parameters. Note that a 737 is much lighter than the 340-500 or the 777 in the examples above (take-off weight was around 65 tonnes), so it's not 100 times less in proportion, but it's still significantly less.

However most aircraft incidents are not due to a single error, but an accumulation of errors large and small that finally end up tipping things over, as every single error removes a bit of a safety margin.

In this case, the report tell us that as a result of the error, thrust was set to 88.3% N1 instead of 88.9% N1. It was still slightly above the minimum for safe take off (88.2% N1), but as you can see, safety margins have been significantly reduced!

Note that in any case passenger weight estimates are just that, estimates. They're also often a relatively minor part of the total weight when compared to the aircraft itself and fuel. But they're still important enough that they need to be carefully considered, and have been readjusted over time to reflect changing patterns.

For one example, read the report in one ASRS Callback issue under the heading, "The Bod Squad". It's about a B727 carrying a football team. Long takeoff roll, poor climb, and inability to reach planned altitude are some of the problems mentioned. Fortunately, the flight was completed without any mishap. But the potential for an accident was certainly there.

Not the answer you're looking for? Browse other questions tagged airliner boeing-737 weight-and-balance or ask your own question.

29
Is passenger weight distribution important on a commercial flight?
24
Can passenger movement in an airliner make it stall?
20
Can passenger distribution cause a parked airliner to tip?
9
What are the different structural weight limitations that have to be considered when loading large aircraft?
11
How do airlines handle uncertainty in passenger weight for weight and balance calculations?
2
Flight Control Weight limitations
4
What is the meaning of Minimum Flight Weight?
6
What kind of horizontal stabilizer does a Boeing 737 have?
1
What are the empty weight and maximum takeoff weight of the Moller Skycar?