Why we need 1 hour for cooling after 3 consecutive attempts for starting the APU? 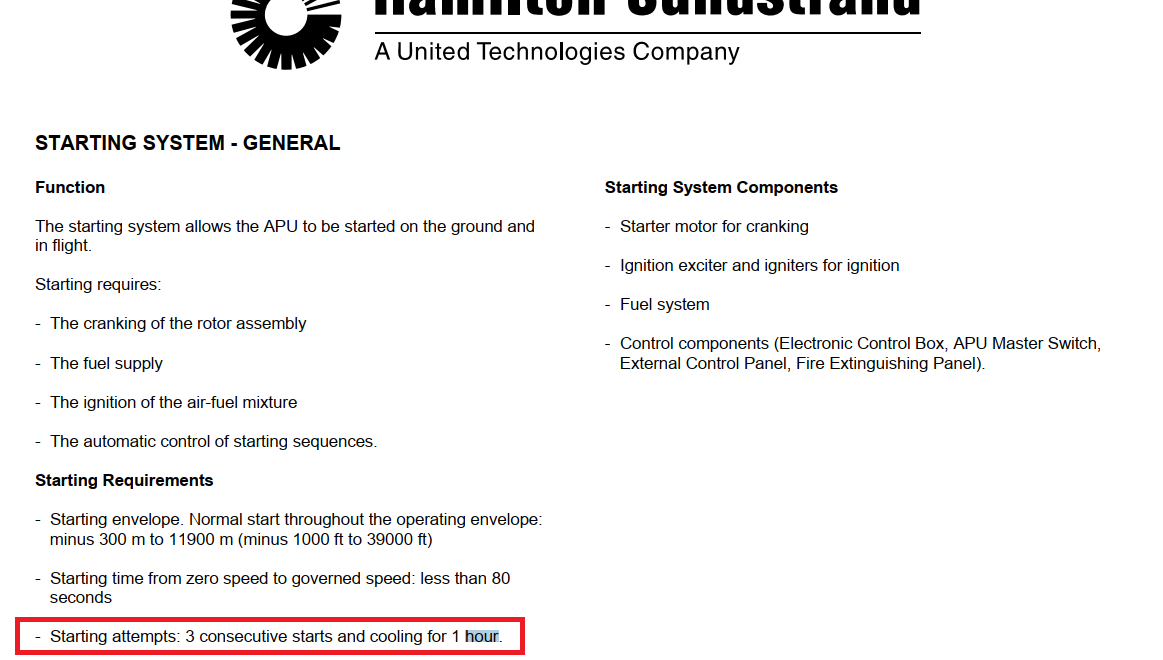 we need 1 hour for cooling after 3 consecutive attempts for starting the APU. But why?

why not after each attempt? and why 1 hour?

is it valid for all APUs?

What about the jet engines of aircrafts? is there something like that for them?

That is typical of any electrically started component. During qualification testing of the APU, tests will be done to measure the heat build-up in the starter motor to determine how many start attempts it takes to get the motor's temperature to a critical level. Other tests determine how long it takes to cool down enough to operate again, after it gets to that temperature.

In a nutshell, the limits are to protect the APU's starter/generator from heat damage if multiple start attempts are needed. Turboprop engines with battery powered starter/generators will have similar limitations.

Jet engines typically use bleed air driven turbine drive starters to start, and may have similar, if somewhat looser, limitations compared to an electrically started engine (to control the starter's gearbox oil temperature).

For example, on the CF34, you're allowed to crank for 90 seconds, and then there's a 10 second cool down after the 1st two attempts, and a 5 minute cool down after each subsequent attempt, up to 5 tries (after that, it's expected that you've given up and called for maintenance). Other than that, no limitations.

The starter and start duty cycle limitations on APU's vary with the APU, and the installation (with the aircraft), and in some cases, with the operator. The same limitations do not apply across the board to all APU's.

If the APU attempts to light off and then fails, it will have an internal temperature increase which is not uniform, or "normalized" throughout the gas path in the APU. Successive start attempts will worsen this condition. Time is required for the temperature to decrease.

Remember that the APU, just like the main engines, is composed of many components which expand and contract at different rates. The APU gets less airflow once the start has failed, than a wing mounted engine. It has less ventilation, and less cooling.

Additionally, if fuel was admitted to the APU during the start process (depending on where the start attempt cut off), fuel may be pooled in burner cans, and could lead to a fire with successive starts; part of the time between starts is a draining period.

Another potential problem, depending on the power source used during the APU start, is ship battery depletion. Successive starts can drain the aircraft batterie(s), and can lead to a large current draw from other sources, through the ship battery. This can cause a battery overheat or even a potential fire, or may damage the battery.

Not the answer you're looking for? Browse other questions tagged apu or ask your own question.

19
Why is the APU located in the tail for almost all commercial aircraft?
8
What is the APU actually used for?
7
Why can't we use APU bleed air for wing anti ice on the A320?
9
Why would smoke enter the cabin if the batteries are switched off before the APU flap closes?
32
Why isn't the APU a standard diesel generator?
4
Why is powering on the APU so low on the A320 emergency checklist?
5
Where is the inlet for the APU on a Fokker 70/100?
8
What is the fuel source for the APU on a B737?
2
Why does the APU Master Switch flash during a normal APU shutdown?
1
What's the starting envelope of APU?