How are range and frequency related in HF communications? [closed]

How does the range of HF communications differ with frequency used? Is it less frequency more range, or more frequency less range?

Neither or both, depending.

Unlike VHF and higher bands, which travel mostly via line of sight and therefore have limited range depending on altitude, HF radio relies on skywave propagation. This means the radio waves travel up, bounce off a layer in the upper atmosphere and then travel back down to the receiver. They may even bounce up and down between layers several times, allowing one to receive signals from the other side of the planet. You may be able to talk to stations far away but not nearby, or the bounces may not work the same in both directions. It’s unpredictable.

All of this odd bouncing depends on atmospheric conditions, which vary from place to place and even from hour to hour. Worse, different parts of the HF band will behave differently at the same time and place, so it has been broken up into several sub-bands of frequencies that tend to behave similarly.

That is why oceanic flights are given two HF frequencies in different sub-bands: at least one of them will probably work. Probably. And which one (if any) may change over the course of a long flight!

Worst of all, because of this long-range behavior, every station on the planet needs a unique frequency, and there isn’t a lot of bandwidth to go around, which is why it is chopped up into very narrow channels that give horrible sound quality. So, HF is only used when absolutely nothing else will work (or is available).

D-layer absorption decreases with frequency, and increases with solar activity (and sometimes increases greatly when a solar flare releases a bunch of X-rays). During the day, and during periods of high solar activity, this absorption can make lower frequencies completely unusuable. At night, the D-layer rapidly fades away, and the lower frequencies "open up" (this is why you can sometimes hear distant AM stations only at night).

F-layer refraction also decreases with frequency and increases with solar activity. The way it works is that signals below a certain critical frequency will be refracted enough to come back down to Earth, but above that frequency they will fail to be refracted far enough, and continue off into space. When the solar activity is high, and the sun is high in the sky, the usable frequency climbs; when the sun sets, it goes back down, but the F-layer doesn't dissipate as quickly as the D-layer, so the result is more of a gentle drop over the course of the night.

F-layer refraction also depends on the angle at which the signal encounters the ionosphere — if the critical frequency is 5 MHz, then a signal going nearly straight up will come back down if it's below 5 MHz, and go into space if it's above 5 MHz. But a signal beamed near the horizon, grazing the F-layer at a much shallower angle and coming down thousands of kilometers away, can refracted even if its frequency is several times higher, say 15 MHz. This causes the curious effect that, when working above the critical frequency, you can talk to places that are far away, but not places that are nearby (unless they're so close that you can hit them with a line-of-sight signal, ignoring the ionosphere entirely).

Plus the ionosphere has its own "weather" conditions, and interacts with the Earth's magnetic field and the aurora in all kinds of interesting ways that would make this post even longer if I tried to explain them.

So in short, there's no straightforward relationship between frequency and distance, and the usable frequency (or frequencies) for a given path depend on the distance between the transmitter and the receiver, where the sun is in the sky in relation to both of them (time of year and time of day), the progression of the sunspot cycle, and a bunch of basically random factors that are difficult to forecast more than a few hours in advance.

As a visual aid, here is a map of (a prediction of) the highest usable frequency between a point in New Jersey and anywhere else in the world; the colors represent the different Amateur Radio frequency bands, which aren't relevant to aviation, but it should still convey the complexity: 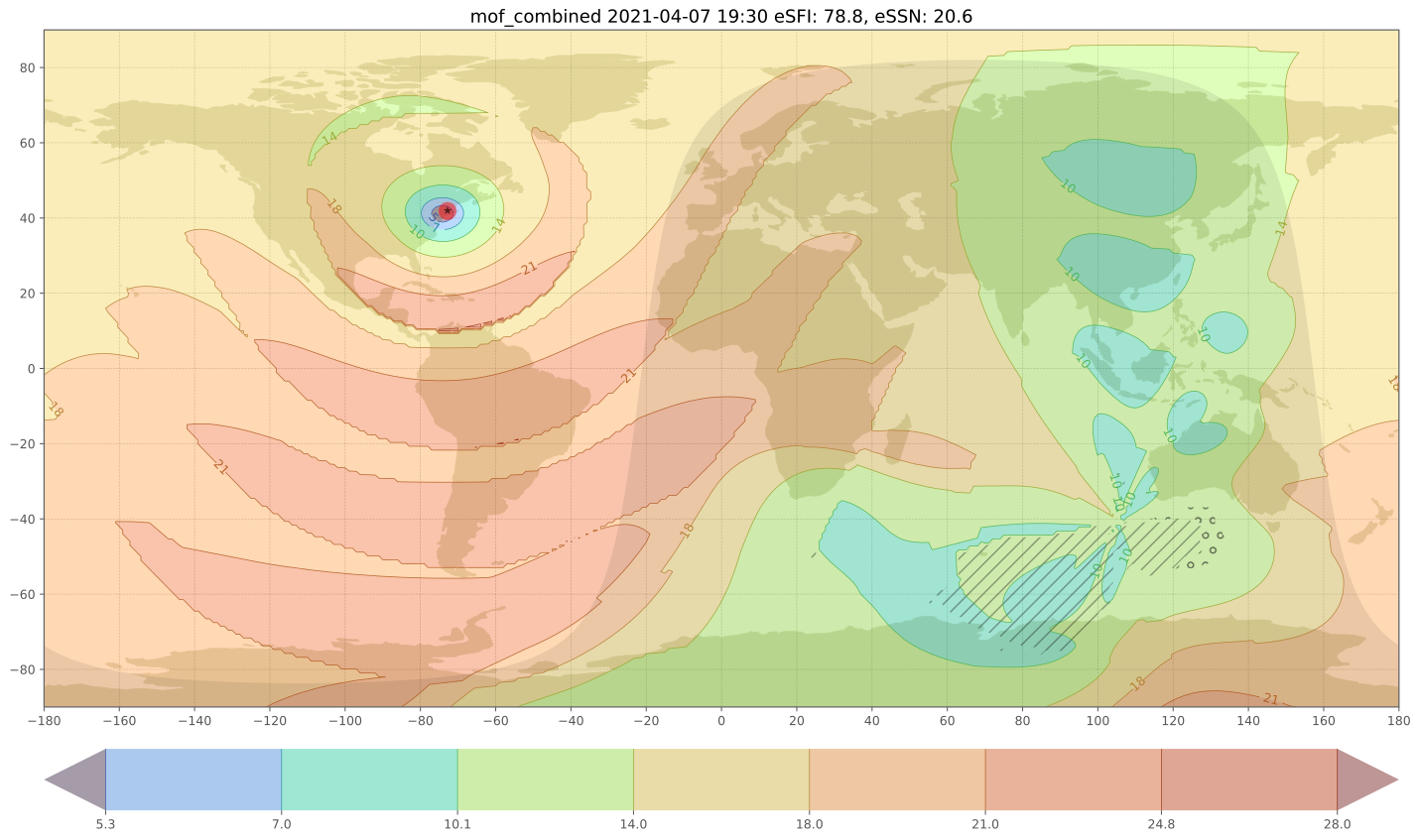 HF radio waves, which have frequencies between 3 MHz and 30 MHz, propagate beyond line-of-sight by bouncing off the ionosphere. The ionosphere is in the upper atmosphere, and it's made up of several layers of particles ionized by the sun. One layer, which is called the D layer, scatters radio waves in all directions, which has the effect of absorbing radio waves. The D layer only exists in daylight hours. (You can't hear far-away AM radio stations in the daytime because the D layer scatters the radio waves.) There are also the E and F layers, which bounce radio waves. (To say that the waves "bounce" is an oversimplification; the waves actually refract.) The E and F layers are strengthened by sunlight, and are weaker at night.

Lightning produces a burst of noise across many frequencies, but especially at the lower HF frequencies (frequencies lower than about 10 MHz). Lightning happens many times per second worldwide. Radio noise from lightning propagates by refracting off the ionosphere just like manmade radio signals. Noise from lightning makes use of the lower HF frequencies difficult when there are thunderstorms within radio range. In my experience, use of the lower amateur HF bands (3.5 MHz, 7 MHz) is difficult in the US in the summer.

Because of the complex effects I mentioned, and others that I haven't such as solar storms, predicting HF radio wave propagation is a complex task. Software to predict HF propagation exists, but I know from personal experience as an amateur radio operator that the software does a reasonably-good job of predicting average propagation, but real-world propagation changes varies quite a bit from day to day, and sometimes changes minute-by-minute, so actual conditions might vary quite a bit from predictions, for better or for worse.

Sorry for the rambling background, but as you can see, it's a very complex subject. To answer your question, daytime HF propagation is more often better than nighttime propagation, but not always. During both daytime and nighttime, higher frequencies tend to "skip" (refract) further, as long as the frequency is below the maximum usable frequency (MUF), but not always. For someone who doesn't know much about HF propagation trying to contact another station on a short list of HF frequencies, I'd suggest to try the frequencies in order from highest to lowest.

It varies all over the place and depends on lots of stuff- here is a summary.

HF radio beams below about 30 megahertz that are aimed horizontally bounce back and forth between the earth and the ionosphere; so over-the-horizon propagation is common. If you are lucky you can bounce an intelligible signal all the way around the world on 100 watts and if you are really lucky you can do that with one watt or less.

Above 30 MHz the range of your signal becomes progressively more and more line-of-sight (i.e., it stops at the horizon), the beam no longer bounces off the ionosphere, and over-the-horizon coverage stops. In this regime, you get best range by putting your antenna on top of the tallest building or mountain possible, which geometrically puts the line-of-sight limit (i.e., the horizon) further away, thereby increasing the useable range.

Above 50 MHz your broadcasts are strictly line-of-sight and your radio signal starts getting bounced off of big buildings- so if there is a metal building blocking your line of sight, it will also block your radio transmission unless another metal building bounces some signal your way, around the other building. This regime is called multipath and is dominant at and above 100MHz.

Microwaves (300MHz to 300GHz) propagate more like beams of light than like radio waves, and are commonly focused into very narrow beams which have to be carefully aimed in order to hit the receiving antenna. They are also line-of-sight (although they can go through wood and plaster) and need the tallest towers possible to get the best range.

16
What is the night effect?

26
Why is 121.5 called "guard"?
3
Are peer-to-peer communications feasible between aircraft?
5
What are the reasons for the particular range of VHF and UHF frequencies?
2
What are the radio characteristics of communications between tower and aircraft?
0
Carrier frequency and transmit power of a commercial aircraft
6
How do aircraft making HF transmissions avoid stepping on other HF users?
6
What are ATC-side procedures to handle a jammed frequency?
2
Why are the VHF and UHF airbands directly adjacent to frequency bands used by vital radionavigation aids?
10
What is the difference between CTAF and the Tower frequency? Why does the Chart Supplement list the same frequency twice?