Can single engine planes glide from a falling position?

Near the end of the 50s Sci-Fi movie This Island Earth, the protagonist is escaping from a flying saucer which is crashing to Earth. As he was abducted while flying a plane (specifically a Stinson 108-1), it's sitting in the cargo hold on top of a retracting hatch: 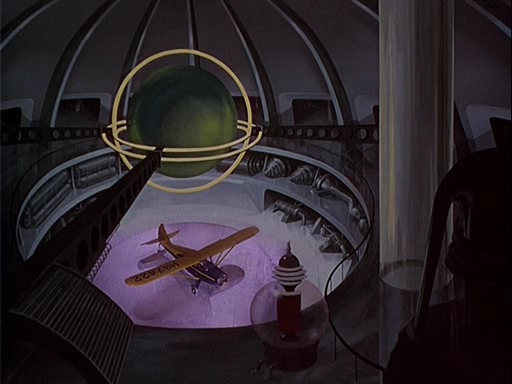 The protagonists then start up the propeller, and once it gets up to speed, the entire hatch seems to disappear and they're dropped vertically out of the bottom of the flying saucer: 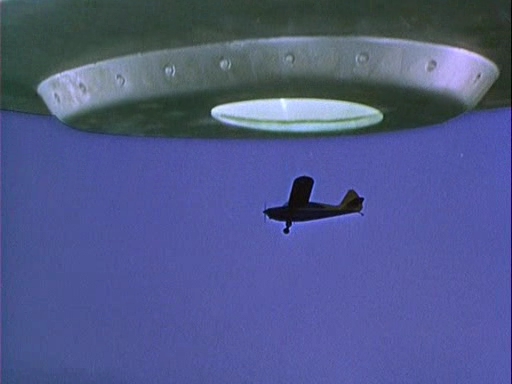 They then manage to continue moving straight without going into any kind of dive, before banking out of the shot.

Is this even remotely possible? I would have assumed that when they leave the system of the flying saucer, they will lose the speed which the saucer has and will basically be falling in a stationary position as they have no lift due to the air only hitting the bottom of the wings.

It's remotely possible, assuming you can find a suitable UFO :-) If you drop an object from an aircraft it starts falling with the same airspeed that the aircraft has, until drag or other factors slow it down. If you've ever seen a flour bombing competition (or just watched some WW2 movies or documentaries) you may have noticed that you drop bombs before you reach the target, not when you arrive directly over it.

So if the UFO is moving forward at an airspeed greater than the Stinson's stalling airspeed (65mph) - let's say 80mph - then the Stinson will fall into the air at an airspeed high enough to generate lift immediately and it will fly. If you already have the engine running and throttle up as soon as you fall out of the UFO, you will generate thrust and maintain the flight.

In reality - if there is such a thing when a UFO is involved - the Stinson is almost certain to lose some altitude and the wake turbulence from the much larger UFO will have a significant (and potentially very dangerous) effect if the Stinson can't stay ahead of it.

Been there, done that. USS Akron and USS Macon 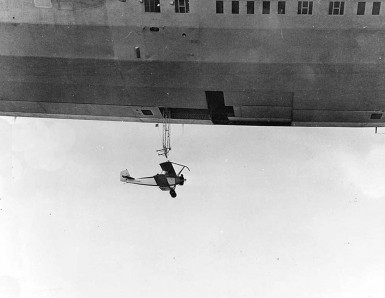 The airship would build up speed to somewhere around 40 miles per hour, which was just about the stall speed of the F9C-2, and the Sparrowhawk would slowly and carefully maneuver into a position that allowed them to hook up to the same bar that hoisted them out. Once hooked, the aircraft was hoisted inside of the airship, into its hanger [sic] bay, where a total of four aircraft could be stowed, with one ready to go on the hook/bar, for a total of 5 aircraft. -farmboyzimsflightsims.com

Having the momentum of the carrier ship, dropping into a 40+ mph head wind means you immediately gain lift and are essentially already 'flying'. Dropping from a head-windless stationary object... not so much.

The sequence you describe are plausible but not without a dive and some turbulence shaking the aircraft as it clears the wake of the UFO.

The principle it uses is conservation of momentum:

Inside the UFO the aircraft has the same speed as the UFO. If you take away the air (and drag, lift and propulsion) and drop the plane from the hatch; the plane would follow a parabolic arc while the UFO stays right above it supported by sci-fi magic right up until it crashes into the ground.

Now if we add air and assume the UFO is going at cruising speed of the plane then after it clears the turbulent area of the UFO it will have enough airspeed to maintain lift and fly.

Turns out that aircraft have launched from an airship, for example the USS Macon and USS Akron launching sparrowhawks and the 23-class airship was able to launch planes during tests. The launch from the USS Macon involved lowering the aircraft into the airstream below the zeppelin and then letting it go though there there was enough horizontal speed from the airship itself to achieve proper flight after only a short dive.

For a suspended drop from a stationary point the plane needs to be able to pitch down while in a vertical drop while in a horizontal attitude. And then achieve enough airspeed to not stall when leveling out. Most aircraft are designed to point nose down while in free-fall.

It's quite possible. For videos, look for the X-series tests done by NASA at Edwards AFB. They've been dropping functional, manned aircraft from a B-52 since the late 1940s. Most famous examples are the X-1 (Yaeger's flight breaking the sound barrier) and the X-15. In the videos the dropped aircraft keeps pace with the bomber until they start the engine and rapidly pull ahead.

Early free-flight tests of the Space Shuttle were the other way up - the shuttle was released from the top of a 747 and flew away without incident. Maybe not quite identical as it was already "in flight" at the time.

they have no lift due to the air only hitting the bottom of the wings.

The other answers given are good, but just wanted to add a few things. First, the starting velocity of the UFO is the starting velocity of UFO is the starting velocity of the plane. If the the UFO is going in the +X direction (let's say to the right) at speed v, then if the plane is pointed in the +X direction it will start moving forward at v. The thrust of the propellers should then propel the aircraft as if it were accelerating from speed v. If v is above stall speed (as stated above) then it will start in controlled flying regime. If v is below stall speed, the plane should still have enough control authority (from it's own generated thrust) to pitch down to accelerate to a speed high enough to fly correctly - if the altitude is high enough of course.

But even more fun to think about might be if a modern fifth generation fighter was dropped out. These fighters have thrust vectoring which in reality could stop the descent and accelerate forward. The F-22 has a stunt like this in it's airshow routine and it is quite impressive.

Sure, if the UFO is moving forward at something close to the stall speed of the Stinson then it would drop, have a momentary bump as it goes through the air boundary of the UFO, then fly away. The airplane is dropped in its landed attitude, with the tail on the ground, so the pilot would need to very quickly get the nose down. I would expect Dr Meacham, genius as he is, would think about this ahead of time and be prepared, perhaps having some forward stick applied as the floor disappears.

If the UFO is stationary then it's a bit more complex, but it could still work. The aircraft is dropped with the tail down and no forward speed. The majority of the air flow at first would be from the propeller, which would give the pilot some elevator and rudder authority. If he applied full forward stick right away he might be able to get the nose down quickly enough that the airplane would quickly build up some airspeed and start normal flight. If he wasn't able to get the nose down before the plane drops then it would most likely go into some sort of spin, which would be recoverable.

Not the answer you're looking for? Browse other questions tagged single-engine or ask your own question.

10
Can a free-falling aircraft with no horizontal (or minimal horizontal velocity) start up and fly to safety?
1
Are there US guidelines on how aviation is handled during an emergency situation?