How do blimps control altitude?

If you have an airship filled with helium, how can you adjust your altitude? i.e. how do you "go up" or "go down"?

Even staying still would be a challenge: The way I see it, you'll never have exactly the same average density as air and therefore will always be either slightly falling or slightly rising.

Is it the case that they have an extra tank of compressed gas as well as vents on the blimp and they make adjustmenst by increasing/decreasing internal pressure of the balloon?

An airship pilot has three ways of adjusting lift: 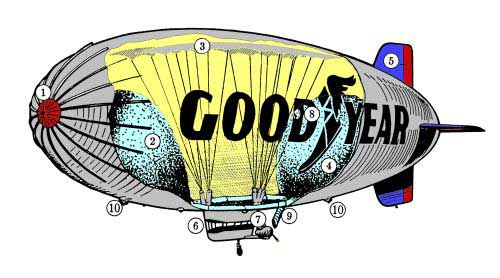 The ballonets in this cutaway drawing of a Goodyear blimp are numbered 2 and 4.

On a calm day, the biggest disturbance is actually the sun. If the envelope is exposed to direct sunlight, it will heat up and the gas within will be heated as well, causing the blimp to rise. If the sun is covered by a cloud, the gas cools down and loses some lift. On partially cloudy days it is not easy to keep the same altitude!

Another threat is an unstable atmospheric temperature gradient. Glider pilots love this, because it will give them strong thermals, but the gas inside the airship will behave similarly to that bubble of warmer gas which causes thermals. When the airship rises, the gas inside cools less quickly than the surrounding air, and the airship will gain lift when it goes up. It becomes really bad on the way down: Now the gas warms up less quickly as well, and the airship loses lift as it comes down. The airship pilot needs to drop some ballast or create more dynamic lift, or his craft will slam into the ground.

Long-range airships like the LZ-127 used a mixture of hydrocarbon gases as fuel. This mixture (called Blaugas) was balanced to be just as heavy as air and filled some of the gas cells within the envelope. Consumed fuel would be displaced by air, so no lift adjustment was needed on a long trip.

Inside the airship are ballonets that are filled with air. These can be easily inflated with compressor and deflated to outer atmosphere without wasting the precious lifting gas, especially in the new designs where the lifting gas is usually safe but expensive helium.

There are normally at least two ballonets, fore and aft, to provide pitch control.

As for altitude control, airships are actually stable in altitude. As the ship ascends, the shell does not allow the gas to expand as fast as the outer pressure declines, therefore reducing buoyancy. Of course as fuel is burnt, weight decreases and the pressure needs to be adjusted accordingly to maintain altitude. Many airships also have swivelling engines allowing additional up or down thrust.

Not the answer you're looking for? Browse other questions tagged altitude airship or ask your own question.

11
How quickly can a hot air balloon climb?
6
Does any company (or country) still use Zeppelins or airships? Why not?
6
When an airship climbs the hydrogen in the ship's cells expand. Does this mean that when the airship descends the empty cells fill with air?
1
Why don't nonrigid airships have multiple gas cells?

4
Why don't airships / blimps use frontal stabilizers or thrusters?
6
Do ballonets control the buoyancy of a Zeppelin NT?
0
How much the true altitude will be lower than indicated altitude by 10°C colder?
0
How can I figure out critical altitude?
1
How can I estimate pressure altitude?
1
Why don't nonrigid airships have multiple gas cells?
3
How fixed air, gas and fixed weights in rigid airships is computed in this book?
4
How to obtain true altitude from indicated altitude, temperature and QNH?