Why are there double hinge lines on the rudders of the Grumman C-2?

Why are there two sets of hinge lines on the rudders of the Grumman C-2? 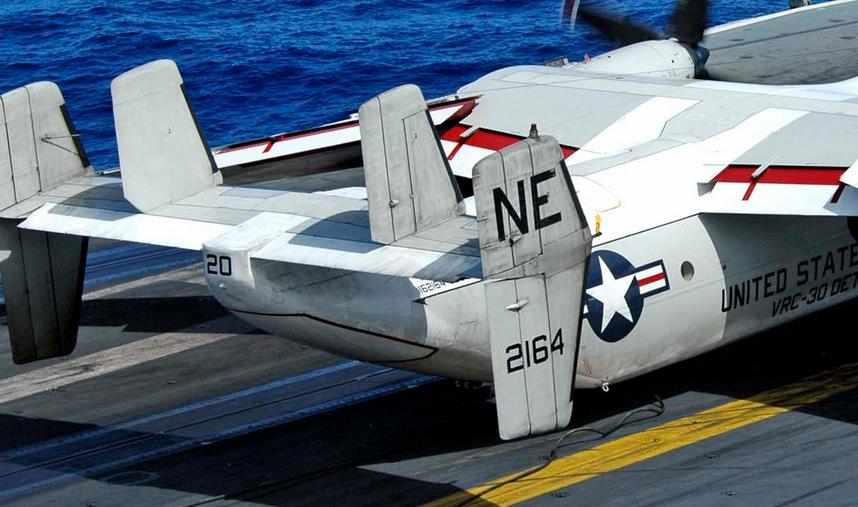 A photo from the related ASE question Why does the C-2 left inboard stab not have a rudder?

Why would two hinge lines provide more control authority than just using the forward hinge line and deleting the rear one?

And why was it thought worth the extra complexity and weight to use this feature on this aircraft when so few other aircraft have been designed with this feature?

What other aircraft have been designed with this feature?

The double hinged rudder is also a Dehavilland Canada feature on most of its larger designs like the Caribou/Buffalo/Dash 7/Dash 8, where maximum yaw power for a given surface area was a design priority (especially if there are height or other limitations that prevent you from adding more area by going up; in the C-2's case, they also added more surfaces as well to limit height, an obvious issue on a carrier, and the same reason the Constellation had 3 tails).

It improves yaw power for a given overall surface area by allowing the rudder to operate at a larger net angle before significant flow separation, by allowing the airflow to make 2 smaller changes in direction vs one larger change in direction for the same overall displacement.

It's not quite as complicated as it looks. The trailing edge segment is effectively a giant anti-servo tab and is simply geared to the vertical fin by a push rod. The actuation system only has to drive the forward segment. The extra parts and complexity are in the second set of hinges and the actuating rod. In the C-2 pics you can see the gearing rod attachments in the little blisters. On the DeHavilland Canada products, the gearing rod is hidden at the base of the rudder.

2 hinge lines will give the rudder more authority because it will direct the air more aggressively. We can think of rudders as vertical and two way extending flaps. It's like the difference between a fowler flap and a split flap. fowler will create a curvature with 2 or more components while split flap only hinges down. Fowler flaps increase the Cl of a wing more than split flap while using low AoA's this makes sense because a vertical stabilizer will not have high AoA.

The fact that C-2 is a naval cargo aircraft means it will be heavy and it will need lots of control authority but it also needs to land on a carrier so it should be small.

One way of increasing yaw control authority is to increase the distance between the empennage and CG hence increasing torque caused by aerodynamic force, the other way is to make the vertical stabilizer and the rudder bigger.

I think the fact that the plane should be controllable while remaining compact, made the designers chose the second option.

Not the answer you're looking for? Browse other questions tagged aircraft-design rudder vertical-stabilizer or ask your own question.

18
Why does the C-2 left inboard stab not have a rudder?

11
Are there cases where a double horizontal stabilizer is useful?
3
What are the performance trade-offs in the Icon A5 spin resistant airframe?
4
Why are trailing-edge control surfaces usually split?
14
Has there ever been a sideways H-tail on an airplane?
15
Why does the F-16 have a fixed stabilizer section inboard of the stabilators?
10
Do carrier-less militaries retain the equipment for carrier operations?
18
Why does the C-2 left inboard stab not have a rudder?
5
Why are all-moving horizontal stabilizers common but all-moving rudders rare on fighters?
17
Why does the F-15 have a swept-back trailing edge at its wing tips?
6
Why does the Eurofighter Typhoon have a long arm canard versus the close coupled canard of the Dassault's Rafale or the JAS-39 Gripen?