Why is the Tu-144 the only commercial airplane with canard configuration?

I understand the delta wing was chosen because of the supersonic cruise (like the Concorde), and canards were added to reduce the approach/landing speed. But canards may be used without delta wing (e.g. Focke Wulf F-19, Soukhoï Su-47, Rutan Voyager,...), so I don't understand why the canard wing configuration is not used among commercial aircraft. 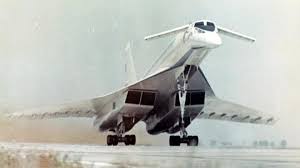 For a statically stable aircraft, the conventional layout gives most efficiency with sufficient damping. Static stability requires that the forward lifting surfaces create more lift proportionally to their size than the rear surfaces. Here is an answer to a related question.

You want the airplane to return to the original flight attitude if it has been disturbed, say by a gust or a jolt on the stick. This can be done by creating proportionally more lift with the forward surfaces (= the wing in a conventional configuration) than with the rear surfaces (= the wing in a canard configuration). Say the jolt pitches the aircraft up. Now the aerodynamic forces should change in a way which increases lift proportionally more on the rear surfaces, so the aircraft pitches down and returns to it's original attitude. By distributing lift the way I mentioned above, the same change in angle of attack on both forward and rear surface will create a proportionally higher lift increase on the rear surface, making the aircraft (statically) stable.

That requires that one of the (mostly) two surfaces is not contributing as much to lift creation than it could. You want this surface to be the smaller one of both, so the whole configuration can create as much lift as possible at a given speed. A canard would be a poor choice for a commercial airplane, because the big wing would now fly at a fraction of it's potential.

Once you shift the center of gravity back to improve maneuverability, things get different: Now the rear surface is creating proportionally more lift, so the smaller surface should go in front. Voilá, a canard!

Now add forward sweep, which will make the wing tips twist to higher angles of attack when lift is increased, and you get a really responsive aircraft (but need to be careful not to overstress it!). This was done on the X-29 and the Berkut.

As jwenting pointed out, the canard on the Tu-144 was not a control surface, but should be considered a detached slat of sorts. Also, by adding some lift ahead of the wing it allows to lower the wing flaps in slow flight, increasing the lift potential of the main wing while maintaining the location of the center of gravity and stability.

And while we are at it: The Piaggio Avanti has a canard, and a conventional tail, too. Here the canard helps to put the wing spar behind the cabin area, makes it easier to fly with a wide range of c.g. locations and to increase aerodynamic damping. This is one of very few examples in commercial aircraft of canards done right!

The canards on the Tu-144 weren't canards technically. They were static surfaces, not moving.
They were purely lift devices to improve low speed handling (and thus help reduce landing speed which was excessively high).
These were added because low speed handling was found to be deficient, due to the inferior (as compared to Concorde) wing design.

Because it is not aerodynamically efficient. To achieve stability the forward surface has to fly at higher angle of attack than the rear. So the canard has to fly at rather high angle of attack which leads to high drag and disrupts airflow for the main wing further reducing it's efficiency. It is not a chance that most modern jets have the same layout. It is most efficient known design.

Also while the higher angle of attack of the canard leads to it's biggest advantage, the gentle stall behaviour where the aircraft just gently lowers nose it means that the maximum usable angle of attack is reduced. This increases landing speed and reduces the safety margin should the aircraft get caught in a wind-shear. Suitable wing twist provides not much worse stall behaviour without these disadvantages.

With delta wings, the canard has advantage that it increases stall angle of attack and thus maximum lift, because the canard acts as vortex generator. This means sharper turns at high speed and lower landing speed, which is why this configuration is popular in fighters (Eurofighter Typhoon, Dassault Rafale, Saab JAS-39 Grippen) where manoeuvrability is more important than efficiency. Besides these designs are not stable (stabilized by computer instead; allows faster control response), so the canard does not produce that much drag.

The Sukhoi Su-47 uses canard primarily for layout reasons as the forward-swept wing does not leave much room at the tail, but a lot of room at the nose. And it's not clear how good the layout actually is; it does not seem to be followed by other military designs. Grumman X-29 first flew in 1984, but no follow up design was created.

The Rutan Voyager counters the inefficiency by not flying the canard at high angle of attack, which yields good efficiency, but poor pitch stability. It was manageable for good test pilots, but not suitable for average airline pilot. And note that this also eliminates the stall behaviour advantage of canard.

Not the answer you're looking for? Browse other questions tagged aircraft-design airliner control-surfaces canard or ask your own question.

1
Why are "canard" not used on commercial aircraft?
35
Why were the first airplanes "backwards"?
38
Are fighter jets designed to be so inherently unstable that a human can't fly one unassisted?
22
Why is the use of tail-down force so common?
11
What are the pros and cons of having canard control surfaces versus a horizontal tail control surface?
4
Why is a canard configuration more Structurally efficient for Rutan's Voyager?
2
Why didn’t the Concorde have flap-canards like the Tu-144?
0
Why does the Rutan Voyager use canards?

16
Why did the Concorde require a droop nose and how did it work?
6
How is the center of mass controlled in planes with multiple tail engines?
8
Is there anything wrong with this more symmetric aircraft design, and why isn't it used?
5
Why aren’t there any lifting-canard airliners?
2
Why didn’t the Concorde have flap-canards like the Tu-144?
4
Does a tandem ultralight need flaps on the rear wing if the front wing has flaps?
4
Why is a canard configuration more Structurally efficient for Rutan's Voyager?
18
Why does an airliner have a shallow descent when heavier, opposite to gliders with ballast?
7
What are the disadvantages of fitting underwing flaps to a Mirage III/5 fighter jets to lower landing speeds?