How do you know if an aircraft engine has a supercharger?

The easiest way to know if a piston-engined aircraft has a supercharger or a turbocharger is to check the aircraft’s POH. If one is not handy, you can look at the aircraft engine itself.

If neither of the above are accessible, just look at the model name of the aircraft. Most modern small General Aviation aircraft manufacturers will want to advertise that their model is turbocharged. A manifold pressure gauge that goes beyond 30 inches of Mercury may be an indicator as well.

Superchargers and turbochargers can be used on piston engines to increase the manifold pressure above ambient pressure, meaning more air can go into the cylinder during each stroke. This increases the power output of the engine. While superchargers were quite common in high performance aircraft of the past, they are relatively rare today. Most aircraft piston engines today are naturally aspirated or turbocharged:

Back in the mid-1900s, and especially during WWII, superchargers were usually the engine boost of choice. Their simpler operation was one of the main reasons. Another reason they were popular was a lack of metals that could handle the heat produced by turbos. Gas was also very cheap, so it wasn't that big of a deal to burn a little more gas to get the power output you wanted.

High temperature alloys, lighter weights, and better fuel efficiency have all made turbos the best choice for almost all of today's aircraft. And, with automatic waste gates on many models, they're easier (and more foolproof) to operate than ever before.

(boldmethod - What's The Difference Between Turbochargers and Superchargers?)

The Rolls-Royce AE 2100 engines used on the C-130J Hercules are turboprop engines. They don't have any pistons and therefore no super- or turbochargers. A turboprop engine looks something like this: 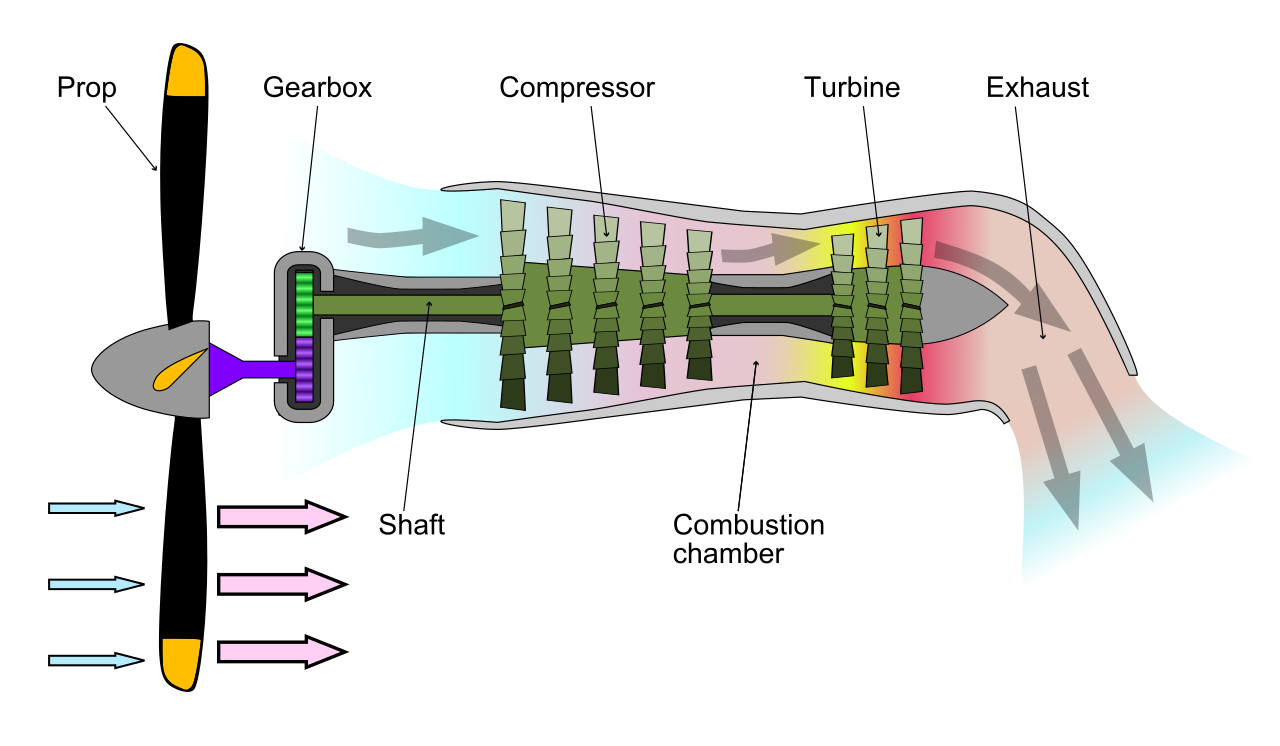 The air entering the engine goes through a series of compressor stages, which increase the pressure, before going into the combustion chamber. This is more equivalent to the compression stroke of the piston engine, but like a supercharger this compressor is powered by the engine itself (it is on the same shaft as the turbine). Every turbine engine has such a compressor, but it is never called a supercharger.

To answer your title question, how do you know if an aircraft engine has a supercharger? For a piston engine, it will be specifically mentioned, since it is relatively special. But for a turbine engine: never.

As in immediate recognition, for spotters for example, the easiest way to tell the difference is by the sound they make, more specifically on take-off. Turbines have a fairly high singing pitch, due to their rpm, whereas piston engines, making a generally much lower pitched brawling sound, only have such a high pitch added to their sound profile if they are either turbocharged or supercharged. Not a very technical answer, but if you just want to be able to tell the difference, that's a way to do it.

Not the answer you're looking for? Browse other questions tagged engine supercharger or ask your own question.

2
What is maximum displacement for aircraft engine?
5
What is the theoretical maximum RPM of a typical aircraft piston engine?
15
Can an ultralight aircraft fly with a 18hp engine?
1
Did any WWII aircraft only use a turbocharger but not a supercharger?
4
How common are gear-driven or belt-driven superchargers in modern aircraft?
10
How hot do internal parts of jet engine get?
6
Can you identify this engine?
3
Has there ever been a centrifugal turbine in an aircraft engine?
9
Does the engine mount of a turboprop engine in an aircraft experience engine torque?