I'm a beginner in airfoil design. I just came across swept-back wings. There is a point that I couldn't understand that theory.

Why is the only perpendicular component of the airflow to the wing(component parallel to chord line) affects the shockwave formation? Why doesn't the total airflow vector(spanwise +chorwise vector component) contribute towards shockwave?

Why wouldn't the shockwave form with the total airflow vector in the swept wing? I have attached the image to show my point better 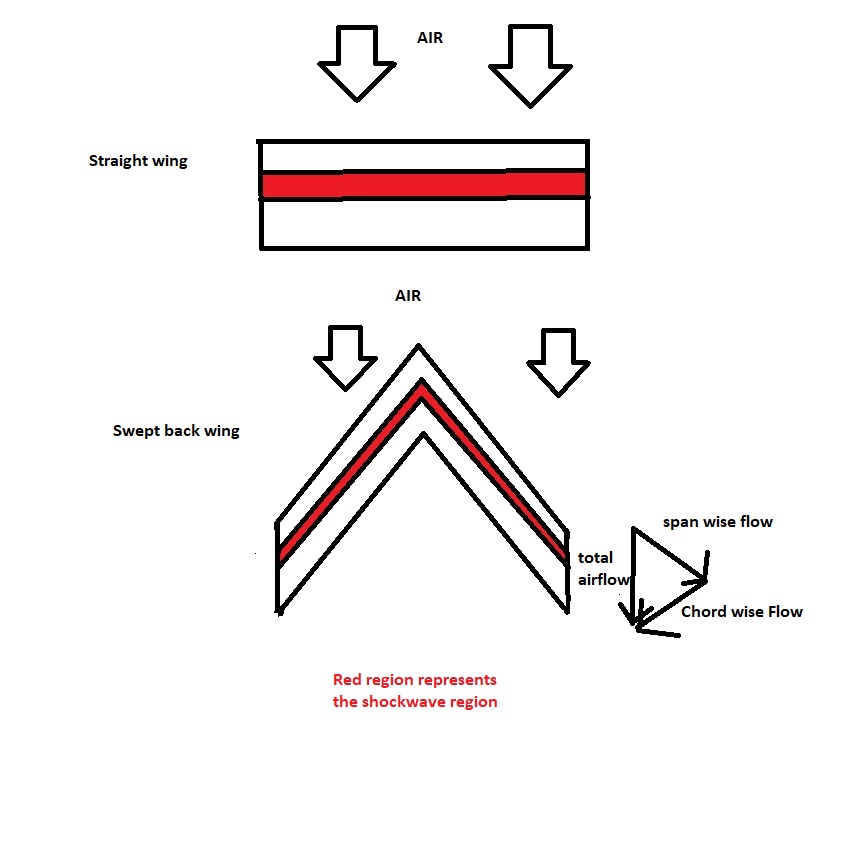 Imagine a wing that is infinitely long, and stretches from east to west. It is moving north at 400 mph. Obiously, it does not produce a shockwave, as it is moving subsonically.

Now, imagine a copy of this wing that is moving to the east at 800 mph (along its length) while still moving north at 400 mph. Other than skin effects, this wing is aerodynamically identical to the first, so it does not have shockwaves, yet it is very supersonic.

Of course, a real swept wing is not infintely long, and so there are shockwaves at nose and tip of the wing, but mid span it really does behave similarly to a wing moving much more slowly perpendicular to its leading edge.

I propose you first read this answer.

Not the answer you're looking for? Browse other questions tagged aerodynamics wing airfoil wing-sweep shock-waves or ask your own question.

60
How do wings generate lift?
13
Why does the wing root of the A330 have a pronounced twist?
8
Where is the spanwise flow? How does the span wise flow point the air towards the wingtip?
1
What is the correct definition of "spanwise" and "chordwise" with a swept wing?

19
How does chord length affect wing design?
4
What factors determine the direction of the resultant force vector?
1
Why local(section) lift coefficient(CLL) is higher near the wing tips compared to the root on untwisted tapered wings and untwisted swept(aft) wings?
2
How does the engine produce aerodynamic lift at high angle of attack?
2
Why does the effective alpha/CL increase at wingtip of swept wing?
1
Why do wingtip vortices affect the upwash ahead of the aerofoil?
1
Why doesn't a wing in supersonic flow produce a shock that results in flow parallel to the leading edge?
1
What is the correct definition of "spanwise" and "chordwise" with a swept wing?
3
Why is sweep angle measured at the 25% chord?
0
Component of net fluid force (lift + drag) along a 2D wing's chord cannot cause a torque,