What is the relationship between STARs, IAPs, and feeder routes?

From what I understood, if I want to do some approach procedure, I need to get to the waypoints marked at the STAR chart, and then I go to the IAF marked at the IAP chart through the feeder route. After reaches to IAF, I can make the approach as published.

Is the relationship between STAR, IAP, and feeder route correct?

From the FAA's Pilot/Controller Glossary, an instrument approach procedure (IAP) is:

A series of predetermined maneuvers for the orderly transfer of an aircraft under instrument flight conditions from the beginning of the initial approach to a landing or to a point from which a landing may be made visually.

A feeder route is:

A route depicted on instrument approach procedure charts to designate routes for aircraft to proceed from the en route structure to the initial approach fix (IAF).

A standard terminal arrival (STAR) is:

A preplanned instrument flight rule (IFR) air traffic control arrival procedure published for pilot use in graphic and/or textual form. STARs provide transition from the en route structure to an outer fix or an instrument approach fix/arrival waypoint in the terminal area.

So you can see that a STAR and a feeder route serve the same general function: to allow IFR aircraft to transition from the en route structure (meaning Federal airways, the Victor, Tango, J- and Q-routes) to the beginning of an instrument approach procedure. The major difference is that STARs are published for busier airports to make things easier and more predictable from ATC's point of view; a STAR can contain any number of waypoints/fixes and, more importantly, can have altitude and speed restrictions pre-published at those fixes so ATC doesn't have to issue them to each individual arrival.

Let's look at the ILS Runway 11 approach into Portland International Jetport (PWM). We can see that there are three Initial Approach Fixes: Kennebunk VOR/DME, BUXTO intersection, and PARSO intersection. If you can somehow navigate to any one of those three fixes, you can follow the approach procedure to safely get down to the ground (or at least pretty close to the ground). 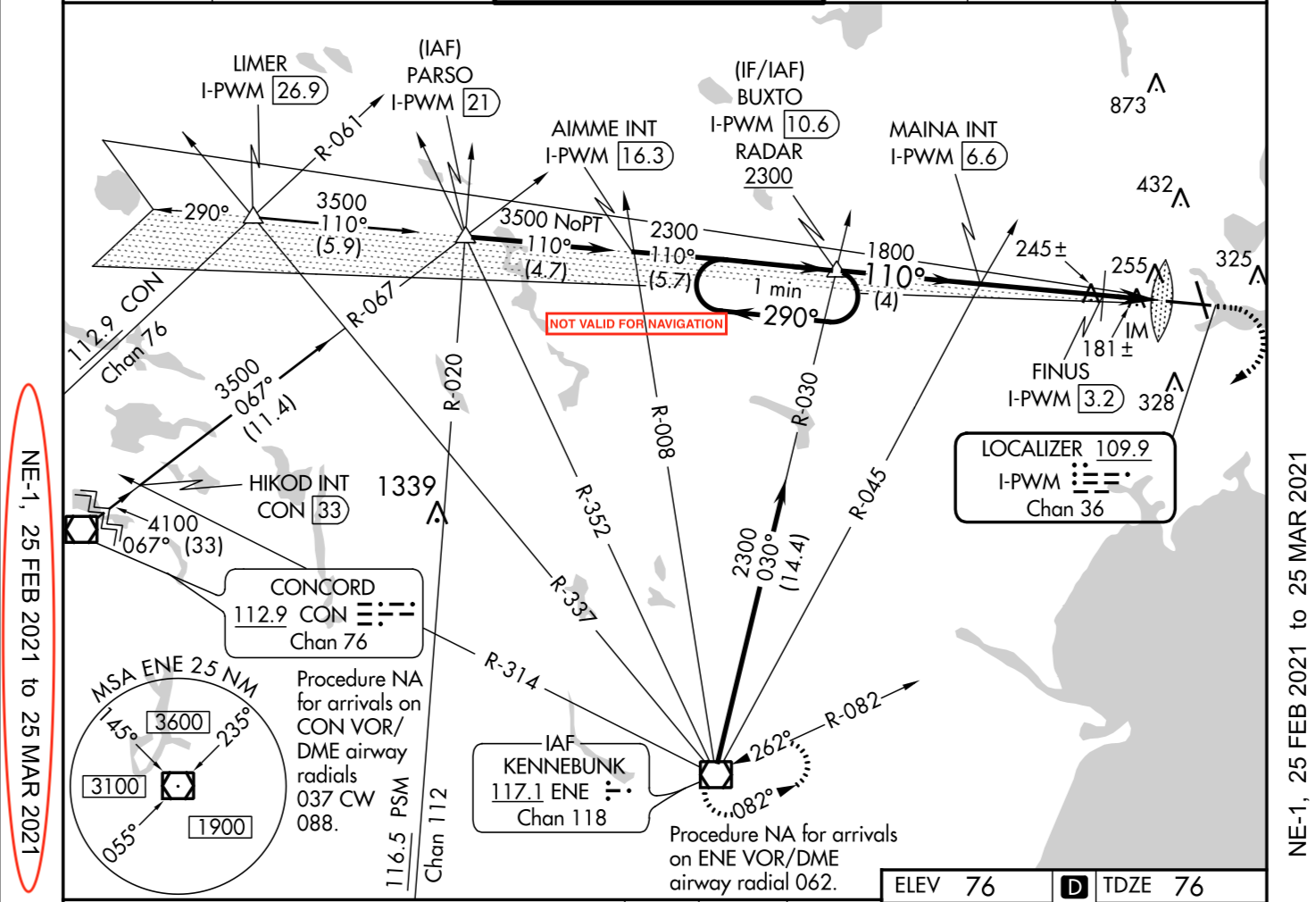 Now say, for example, you're navigating via V93 from the southwest. When you reach CON you could continue to follow V93 to ENE and start the published approach by flying on the ENE030 radial to BUXTO and performing the hold-in-lieu-of-procedure-turn. But that takes you rather out of your way, so if you could you'd rather start the approach at PARSO and avoid having to perform a procedure turn.

Well, PARSO is on V3, so you could fly CON.V93.SATAN.V3.PARSO. But that still isn't the most direct route.

Happily for you there's a published feeder route starting from CON! When you arrive at the VOR/DME you leave the airways and navigate on the CON067 radial directly to PARSO. Hooray! 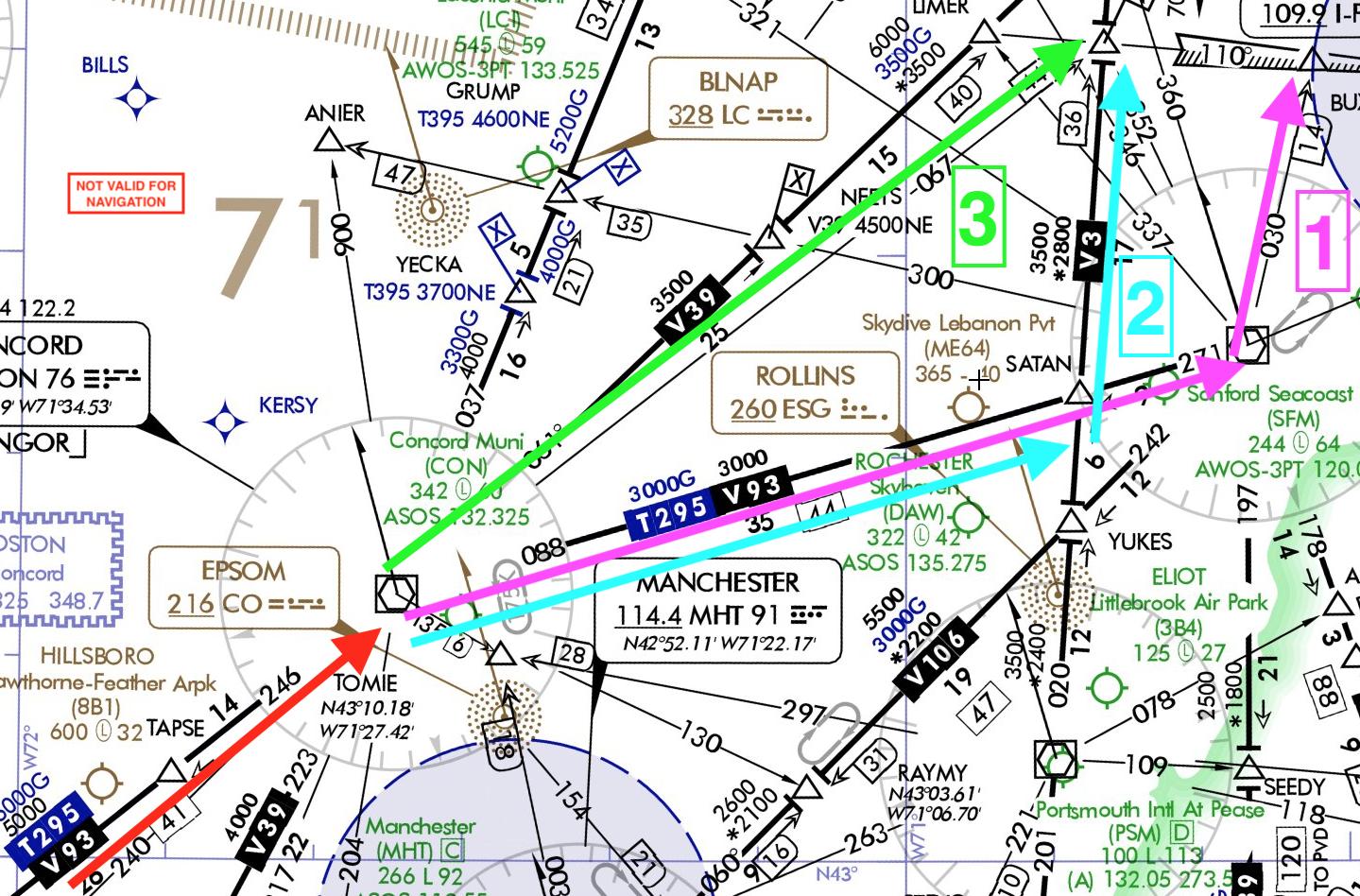 This plan might work if you were flying a Skyhawk at 5000 feet. But say you're flying Southwest 1982 from Baltimore, descending out of the flight levels at 250+ knots. ATC would rather have you flying a certain procedure that's the same as all the other jets coming in to Portland, and your dispatcher knows this—so they've filed for, and ATC has cleared you via, the SCOGS THREE arrival. 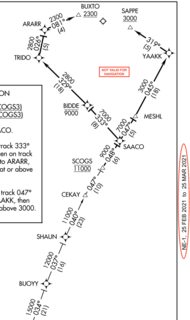 Some time before you reach SAACO, and probably long before then, ATC will tell you to expect Runway 11. Therefore, when you reach SAACO, you will make a left turn towards BIDDE and continue following the published route until you reach BUXTO. By this point ATC has cleared you for the ILS Runway 11 Approach, so you transition from the STAR directly onto the instrument approach. Note that you arrive at BUXTO on a track of 081, meaning you only need to make a 29º turn to intercept the localizer (track 110).

The SCOGS arrival is designed to get you from the enroute structure down to the ground with little-to-no ATC intervention. But at many even busier airports, the arrival will not smoothly transition onto an instrument approach. Instead, you will depart the final fix on a published heading (likely the radar downwind heading) and expect vectors to final from ATC. This allows ATC to give you extended vectors, or shortcuts, as necessary to account for the mixing of different arrival streams. The arrivals into Charlotte/Douglas International are like this, for example the CHSLY FOUR: 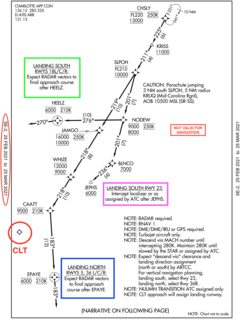 To answer your question in a couple of sentences, you do not have to follow or fly a STAR or feeder route in order to fly an IAP. There is no relationship between STARs and feeder routes other than they have similar functions.

The shortest route to an IAP is to vector to the intermediate leg/segment of the approach. That is the section between the Intermediate Fix and the Final Approach Fix.

A STAR will get you from the En Route or cruise segment of your flight to the terminal area where you will transition to the proper direction and altitude for an approach to the airport. The STAR may or may not share a common fix or waypoint with the IAP or feeder route of your choice. It is very unlikely that there will be a common fix. Therefore, you might not have an actual published route from the STAR to the IAP. Where a STAR terminates with the IAF to an IAP is usually a STAR that services a specific airport instead of the general Terminal Area.

Either the feeder route or the STAR can be used to get to the IAP. Or, neither can be used if you vector directly to the IAP. And, a Terminal Arrival Area on an IAP effectively eliminates the need for a STAR or a feeder route since you can descend from cruise within the TAA. In any case, the IAP does not have to start at an IAF. You just have to be established on the IAP prior to the FAF.

That being said, you can combine a STAR with a feeder route to the IAP. But, more than likely, you will be vectored from the last point on the STAR to the most direct route onto the IAP by ATC (if you are getting ATC separation service and routing).

Not the answer you're looking for? Browse other questions tagged faa-regulations iap or ask your own question.

28
If there is a misprint on an instrument plate, is a pilot required to comply with it?
21
When are procedure turns not required?
9
What is the official FAA definition of the term enroute?
2
What is the optimal time to get from ASEL to ASES certification?
3
Why are there no RNAV (ILS) approaches?
1
How can I find a final approach fix (FAF)?
0
Is there a manual which describes the algorithmic procedure on which the Vertical Navigation Guidance is based?
3
How can a pilot become established on the KBIV, ILS or LOC Rwy 26 Approach?
7
When can I start an approach if I lose comms and my clearance limit is not an initial approach fix?
6
Can I fly a STAR (standard terminal arrival route) if I can't maintain the minimum speed for it?