How much aerodynamic heating do jetliners endure?

At cruise altitude (~ 33,000 ft) and cruise airspeed (~ 500 mph) how much do present-day airliners heat up due to air friction during their journey? Probably not much because there's still ice on the window outside when you're at cruise altitude, but by how many degrees is the plane's hull warmer than in case the plane stood still at that altitude (therefore, compared to the minus 56°C at the tropopause)?

I'm also curious about the Concorde which flew up to 60,000 ft high and at more than 1300 mph. To the air friction there also comes the heating due to supersonic flight, so all in all how much warmer did the Concorde get during its supersonic cruise?

Based on the formula already shown in this answer, we can calculate the TAT (true air temperature), which is the temperature reached at the stagnation point1, from the SAT (static air temperature) and Mach number:

The resulting plot of TAT vs. Mach number at the SAT of -56.5°C (ISA tropopause) is shown below: 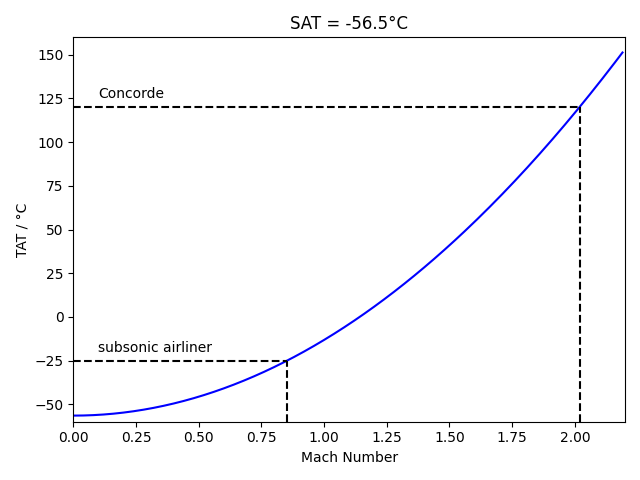 As you can see, a subsonic airliner (I assumed Mach 0.85) will still experience temperatures below freezing. Concorde however was reaching temperatures of around 120°C at cruise speed of Mach 2.02. This was already close to the limit:

As requested in the comments, here is a larger speed range including the SR-71: 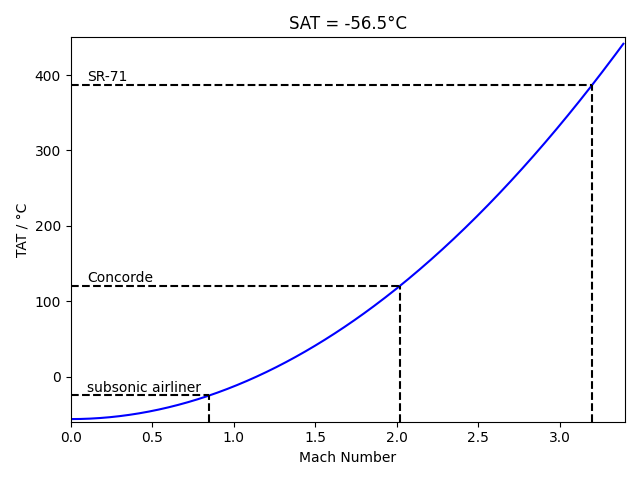 The temperature could reach almost 400°C at Mach 3.2 (What is the true top speed of the SR-71?), but note that the SR-71 used fuel to cool the skin (the windscreen was the hottest part at 316°C according to Wikipedia.

Typically, TAT (total air temperature) will be about 30 degrees C warmer, than the static outside air temperature (SAT), for typical transport category aircraft (not supersonic), operating at the base of the transonic range (.80 M1 or higher).

Not the answer you're looking for? Browse other questions tagged airliner supersonic temperature concorde or ask your own question.

10
What is the true top speed of the SR-71?
13
How were the fuel tanks sealed on the XB-70 Valkyrie?
5
When and where are anti-ice required for supersonic flight?

2
How does the shift in aerodynamic center affect the performance of swing wing aircraft?
3
Is airframe heating a concern at subsonic speeds?
4
Why does load shedding still occur in jetliners (e.g., 787) when there is so much power available?
2
Why didn’t the Concorde have flap-canards like the Tu-144?
9
How is the fuel quality monitored/assured for jetliners?
2
How much the Concorde secondary nozzle contribute to thrust?
4
Is the ISA still up to date?