Which airfoil to use for high subsonic flight?

I am desigining an aircraft, which shall fly up to Mach=0.9 in cruise flight in an altitude of 10 km.

So when I think of which airfoil to choose, I have to consider aspects like

But what comes first in my mind is, that I have to prevent shock waves forming on my airfoil, because drag will dramatically increase. So actually, this is my first demand for the airfoil.

I am wondering now, if this is normal that I need such a high sweep angle? Or did I choose the wrong airfoil. So normal commerical aircraft have angles between 30 to max. 40° ?

So the only way to have less sweep angle: find another airfoil (I think 64006 is already one of the best free available airfoils) or I accept higher values of drag coefficient ?

How do airliners tackle the problem? I think I read that they allow mach numbers a little bit higher until the drag divergence velocity?

Yes, you chose the wrong airfoil.

While the NACA 6-digit series was among the first set of airfoils computed from a design pressure distribution, they will suffer from shocks when operated above their critical Mach number just as any other airfoil. 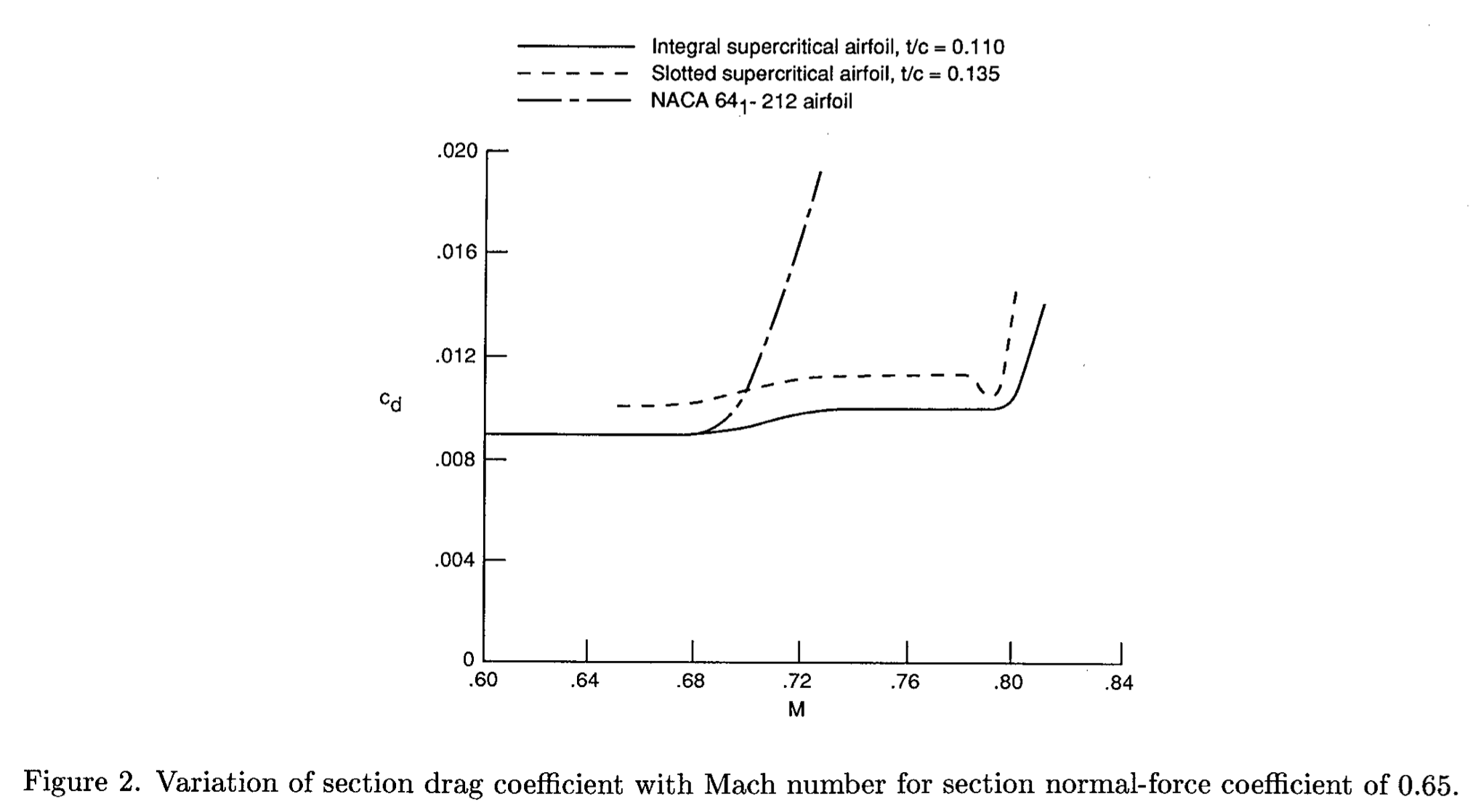 Comparison of drag rise over Mach for 6-series and early supercritical airfoils from NASA Technical Paper 2969. It should be obvious which one is to prefer.

When transsonic research started, inverted airfoils paradoxically turned out to perform better at moderate lift coefficients and high Mach numbers than regular airfoils. Key is the low curvature on the suction side which makes a shock-free pressure rise possible. Practical designs aim for a weak shock over a range of lift coefficients. In oder to produce the most lift at a give Mach number, the pressure difference between upper and lower side can be maximized where thickness is low, i.e. in the rear area of the airfoil. This is called "rear loading". Supersonic flow on the upper side allows to create more lift over the full chord. On the most recent designs another small lift contribution results from a slower pressure drop on the forward edge of the lower side pressure distribution (the forward lower-surface undercutting of Phase 3 airfoils).

Supercritical airfoils have negative camber over most of their forward part and strong positive camber only in the rearmost 20 - 30% of their chord. This NASA report (PDF!) lists a range of supercritical airfoils with different thicknesses and design lift coefficients. But it can only serve as a starting point since wing sweep will change the pressure distribution locally and demands a shift in the point of maximum thickness (forward at the root, backward at the tip) and more negative camber at the root in combination with a higher local incidence.

Mach 0.9 is only used by business jets where owners care more about bragging rights than fuel consumption. Airliners normally fly at Mach numbers ranging between 0.78 (short range) and 0.84 (long range) and for best efficiency should stay below Mach 0.82. They fly a bit above their drag divergence Mach until the gains in speed are balanced by the losses in drag. Of course, they can be operated at higher speeds but do so only to make up for a delay.

Not the answer you're looking for? Browse other questions tagged airfoil drag or ask your own question.

4
Which type of airfoil does the 737 use?
10
Do airliners like Boeing and Airbus use airfoil variation along the span for their wings?
4
Is it best to use a thick airfoil or an undercambered airfoil for slow speed flight?
1
Which airfoil would be optimum for a glider?
12
Why isn't there a single best airfoil for subsonic flight?
4
Transonic Airfoil with high critical mach number