What's that component between the engine and wing?

It's on most commercial aircraft and large aircraft with turbofan engines... Is there a specific name for it? Does it serve any other functions apart from attaching to the wing and feeding the engine the essentials? Has there been any aviation incidents that involved something malfunctioning or breaking inside of it? Or some other interesting things about it? Just out of curiosity! Thanks! :) 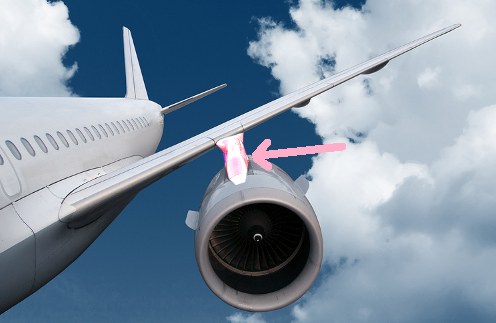 It's a hard-point called an "engine pylon".

And yes, some designs use specific points designed to fail if there is excessive force, allowing the engine to separate from the aircraft without ripping the entire wing apart which would obviously be a catastrophic event. It has happened on a few occasions.

The above image is from the Wikipedia page on the American Airlines 191 accident, where, due to a faulty maintenance practice of using forklifts for removing and reattaching the engine/pylon assembly, the aft bolts were damaged. The pylon eventually failed, allowing the engine and pylon to push up and over, separating from the wing.

Other examples include China Airlines 258 and El Al 1862.

It's a pylon and indeed just hold up the engine and connects it to the craft. They are designed so that excessive force will cleanly separate the engine without damaging the wing.

American airlines flight 191 had the pylon fail in midair due to mishandling of the engine during maintenance.

2 engines separated in El Al flight 1862; in this case the inboard engine separated cleanly but then slammed into the outboard engine where it did damage the wing. The same thing happened a year earlier in China Airlines flight 358.

This part is called the "pylon" or "strut" for the engine. It holds the engine on the wing, provides a path for all of the engine systems to connect, and includes the aerodynamic fairing to cover it all. The strut is designed to prevent a fire in the engine area from spreading to the wing. Mounting the engine below and forward of the wing leading edge provides some advantages over other options.

There are differences in design between manufacturers. Boeing struts are designed to break away from the wing under extreme loads. The strut attaches to the wing using fuse pins, which will fail at a specific loading, lower than the strength of the wing. This prevents the wing from breaking under the load, which could cause the fuel tanks to break open and start a fire. Examples of engines breaking away as designed are the Asiana 214 and Lion Air 904 incidents last year.

Airbus struts are designed to remain attached to the wing. This actually allows the structure to be less complex, and Airbus struts tend to be noticeably more narrow than comparable Boeing struts. Other methods are used to maintain safety in a crash, such as keeping the area directly above the engine as a "dry bay", which is not used to store fuel.

Here is an Airbus patent for a strut design using composite panels, which describes the strut.

Not the answer you're looking for? Browse other questions tagged jet-engine aircraft-systems fixed-wing or ask your own question.

29
Why do we use pylons to mount the engines on jetliners?
33
How does the mounting location of a jet engine affect aircraft performance?
4
How are engine pylon designed?

13
What is the relationship between thrust and engine RPM in a turbojet?
8
Is there a relationship between turbojet engine rpm (N1 & N2) and fuel consumption rate?
4
What equation describes the relation between engine thrust and EPR?
6
Do wingtip vortices really only form when airplane wheels are separated from the ground?
10
Is there a fixed-wing aircraft that uses a scissor propeller configuration?
5
White light illuminating the engine coming on at intervals in flight; Curious what's the protocol?
0
Difference between engine rev up and run-up
7
What are the "beta lines" of a gas turbine engine component?
10
What exactly is the pressure thrust component and why does it exist?